The first step is the most difficult, my friends. That’s the first message I want to carry today.

Had I written immediately after Nachala took action last Wednesday, July 20, my tone would have been heavier.  For in the immediate aftermath of what transpired it was difficult to sense an invigorated Zionism.  I would be misrepresenting the situation if I claimed otherwise:  There were a couple of very tough days.

Yet we must look at that brief time not as an end in itself, but rather as the beginning of a social movement. Daniella Weiss and other leaders of Nachala have put out messages describing all that was positive in what transpired.  And I will share some of those messages below.

Last Wednesday, thousands of volunteers met at consolidation points and then moved out to designated sites that had been identified as future settlements.

Originally, three sites had been identified: one each in Binyamin, Samaria (Shomron), and Judea.

I include the map below because, while most of my readers are familiar with the Shomron and Judea (marked as Gush Etzion and Har Hevron, Hills of Hevron, here), many are less familiar with Binyamin – a region south of the Shomron that contains many important, historical sites, such as Shilo and Beit El.

The turnout was so great, and so enthusiastic, that the plans were expanded to six sites, two in each of the areas mentioned.  Many young people were involved, as well as whole families.

I note here that some reports say there were seven sites in the end, but there is confusion about this.  What has been identified with clarity are two in the Kiryat Arba area (near Hevron in Judea), two in the Binyamin region (in the Psagot area and in the Gush Talmonim area), two in Samaria, (one near Revava, and one near Bruchin).

The strength of the outpouring was the first enormously positive step.  Estimates are that there were 10,000 people who came out. There has been nothing like this in many years and this is a huge sign of good things yet to come.  Now, the numbers need to grow.

What must be emphasized is that each of the sites identified by Nachala as a potential settlement is on State land, fully vetted.  That is, each has the legal potential to BE a settlement.  Not one is on private Arab-owned land, or on land that had been set aside for public usage such as a roadway.

At each site, people came with hope of staying for a day, or two, or possibly through Shabbat.  There was no declaration of intention to remain indefinitely.  Sleeping bags and tents were brought.

And here I must stop to clarify the situation.  It was said that because no permanent building supplies were brought, which would have been an indication of intent to build permanently without permits, the actions taken were not illegal.  Yet I have learned that this is not so, because the declared intention was towards something permanent, even if tents and not wood and nails were brought that first evening.

And so with great alacrity Defense Minister Gantz ordered troops out to stop these lawbreakers.  IDF troops went out, and Border Police, and civilian police.  As I understood it, in some instances soldiers were pulled from assignments regarding infiltration of Palestinian Arabs – and reserve troops put in their places – so that they could rush to address this “urgent” situation. Roadways were blocked and an area around each site was declared a closed military area.  Persons within those areas were told to leave.  By Thursday morning all were gone.  It was painful, heavy.

What made it all the more difficult – and it is difficult for me to report this – is that there were (limited) instances of unnecessary violence exhibited by security forces.

My information is that it is the Border Police who are the most given to gratuitous “muscle flexing.”  Some soldiers – I have this on firsthand reports – were sympathetic and not eager to be involved beyond a minimum required by their orders.

When one of my grandsons texted me that “It’s sad that we are fighting each other and not our enemies,” I cried.

While all of this was taking place, Gantz was in the US and present at the Aspen Security Forum. On Thursday, when being interviewed by a seriously left-wing Jeffrey Goldberg, editor of the seriously left-wing Atlantic magazine, he declared that he was “Happy that I blocked the threat of annexation of Judea and Samaria.”

Here we see the heart of the battle that we are facing.   It involves nothing less than the future of Israel.

Last December Gantz hosted Mahmoud Abbas of the PA in his home, the first time in years that Abbas had been hosted in Israel.  The security coordination that was reportedly discussed was something that could have been handled by underlings. Maybe Gantz was eager to serve Abbas tea and cookies.

“The threat of annexation”?  The threat is Benny Gantz, who sucks up to the PA.  Nor would I cut “two-state solution” Yair Lapid any slack on this matter, either.  (I will have considerable additional political assessment coming down the road.)

Gantz would have us believe that he is acting to protect the rule of law (the people of the Nachala Movement were breaking the law), but on a massive scale he is guilty of the crime of selective enforcement of the law.

In the main, Gantz turns a blind eye to this.  While the Nachala volunteers broke the law by saying they intend to foster building in areas that have not been approved for construction, the Arabs are building, with concrete and stone and metal. Below in E1

The good people of Nachala, true Zionists, have had enough.  They see the danger to Israel with the encroachment of Arabs on Jewish land, and they are determined to do something about it. They haven’t used the word civil disobedience, but I will, because I think it aptly describes what they are about.  They are taking a stand.  They are aware that not far from the areas they selected for settlements there are Arab communities that will move forward and encroach on those areas unless Jewish settlement stops them.

There were commentators who said that this whole Nachala action was a PR move designed to have an effect on the election.  That it was just PR is not the case – there is intention of maintaining a low-level presence on each site, in spite of a couple of soldiers stationed in each place.  But the publicity is enormously important.  People must understand what’s at stake.

And so I ask you to share this very broadly.

We must, absolutely must, have a right-wing government to set things right.  And the first step is enhancing public awareness of what’s truly going on.

On Sunday, comments came out from leaders of Nachala (all originally in Hebrew and provided in translation). From the Director General:

“…we saw that the government was trying to bring about a confrontation…to incite…quarrels between the settlers and the army [to distract from the issue of the need for settlements]…and therefore we did not continue the original plan.

“I think that with G-d’s blessing there was a great progress in public consciousness and the joining of a wide public to the idea and action.

“I really felt in the last week a public song and praise for the Land of Israel.”

He cautioned that these things take time, that we need patience and should not panic. He cited examples of the building of settlements such as Elon Moreh, which took repeated effort, repeated pulling back and trying again before there was success.  (Today it has a Hesder Yeshiva of considerable reputation and a population of about 2,000.)

“We need to constantly keep the goal in front of our eyes and not be dragged to the sides that will distract us from establishing the settlements.”

He said the next moves are being considered carefully.

From someone else involved in this work:

“The thing here is a move.

“A move to arouse the public.

“And of course the establishment of the settlements.

This, as I have noted, requires arousal of a new public attitude and a new government after elections. It is a social movement we are talking about.

Let us now take a closer look at the site located in Gush Talmonim in Binyamin.  Each site has been named, and this one is Gofna, after a community of the same name located in the Binyamin region in Second Temple times, where grapes were grown.  All pictures are courtesy. 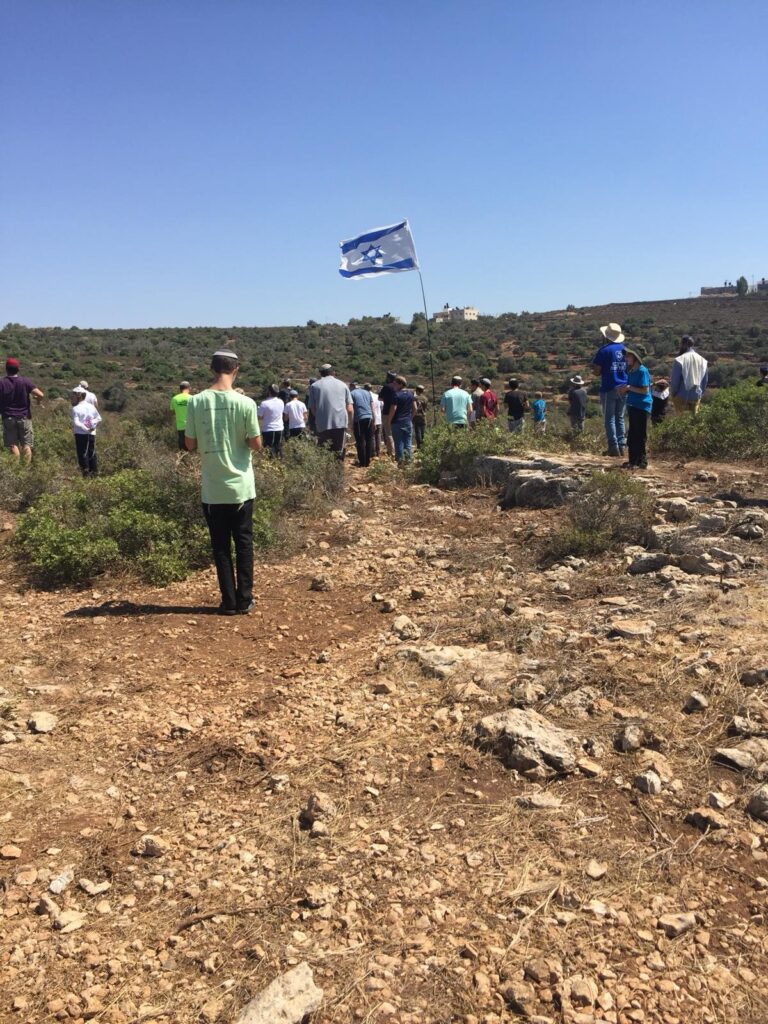 And last night (Monday night) women brought supper out for their families; children worked the land – learning that it is theirs as they did so; prayers were said again; and there was a lesson taught by a rabbi. It was not a gathering of many hundreds, it was perhaps several dozen.  But it was a presence.  A peaceful, determined presence that will be sustained and grow.  A presence offering hope. 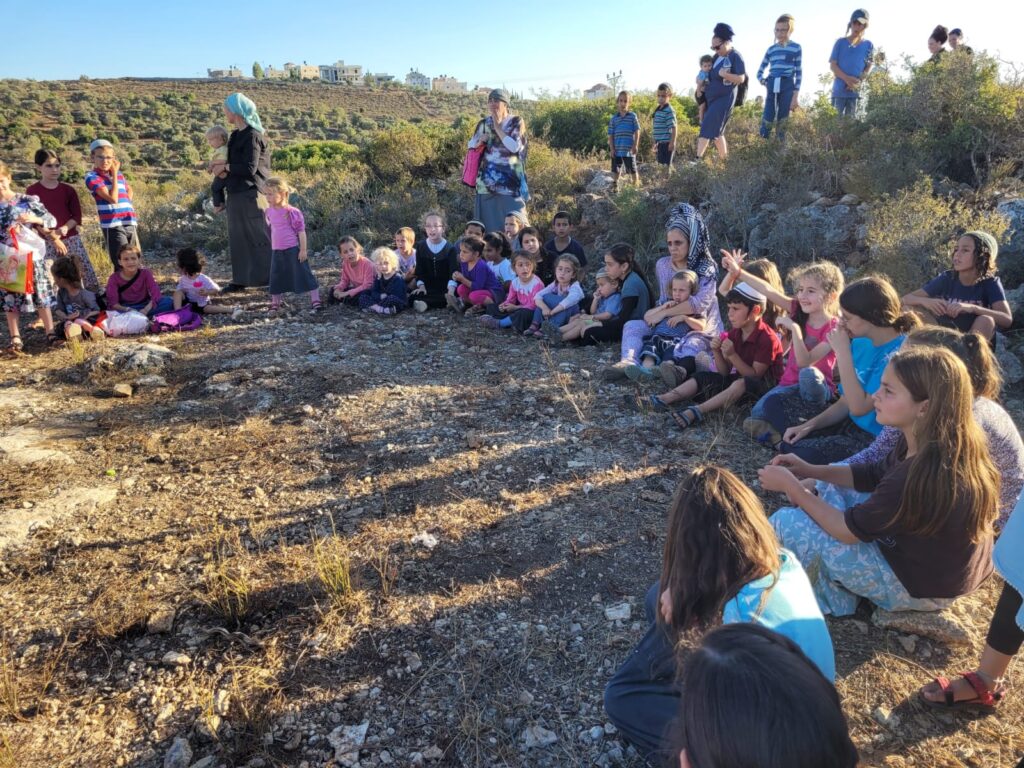 And let me end here by telling you why this whole venture is so very important and what damage Gantz has already done.

Within Gush Talmonim there is a small community high on a hill called Harasha.  A vibrant yeshiva high school is located there, as well as a youth center.  Over Shabbat, Arab rioters set the center on fire, burning holy books.  Firefighters who arrived saw the Arabs running away, and remnants of a Molotov cocktail were found on the scene. 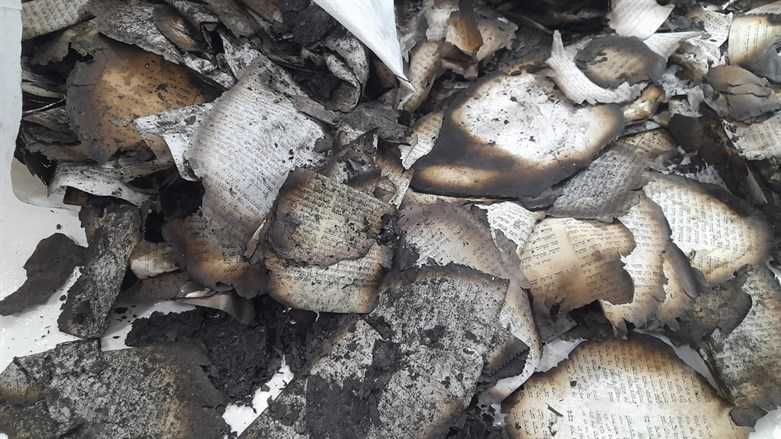 This happens when Arabs perceive weakness.  Gantz, Minister of Defense, was able to convey that impression for the Arabs with his action, his attempt to block Jews from claiming the land.

In the end, this situation must and will be reversed.

From Israel: “Fighting the Fight That Must Be Fought!!”