In my last posting, I described the hard-nosed position taken by the IDF on the orders of Defense Minister Benny Gantz (head of Blue & White) with regard to the Nachala Movement’s effort to promote the establishment of six new yeshuvim (settlements) in Judea, Binyamin and Samaria.  The Nachala program – in the spirit of Zionism – has been spurred by the massive illegal Arab incursion into Area C, which is under Israeli control. In contradistinction to Gantz’s response to Nachala, this illegal building has been tolerated to a horrendous degree, threatening Jewish contiguity and advancing plans for a Palestinian state.

The army blocked roads, established closed military zones, and cleared out the Nachala volunteers.  This happened during through the late hours of July 20 and the morning of July 21 on all six of the sites.

You can see my full posting on this issue here:

At the time, I wrote that the Movement intended to keep a low-level presence on each site.  And so, subsequently there have  been afternoon (mincha) prayers  on some sites, and some activities for kids; people have continued to work on clearing the land.

Pictures here and below were taken in Gofna, in Gush Talmonim, Binyamin, and shared courtesy of the Nachala Movement. 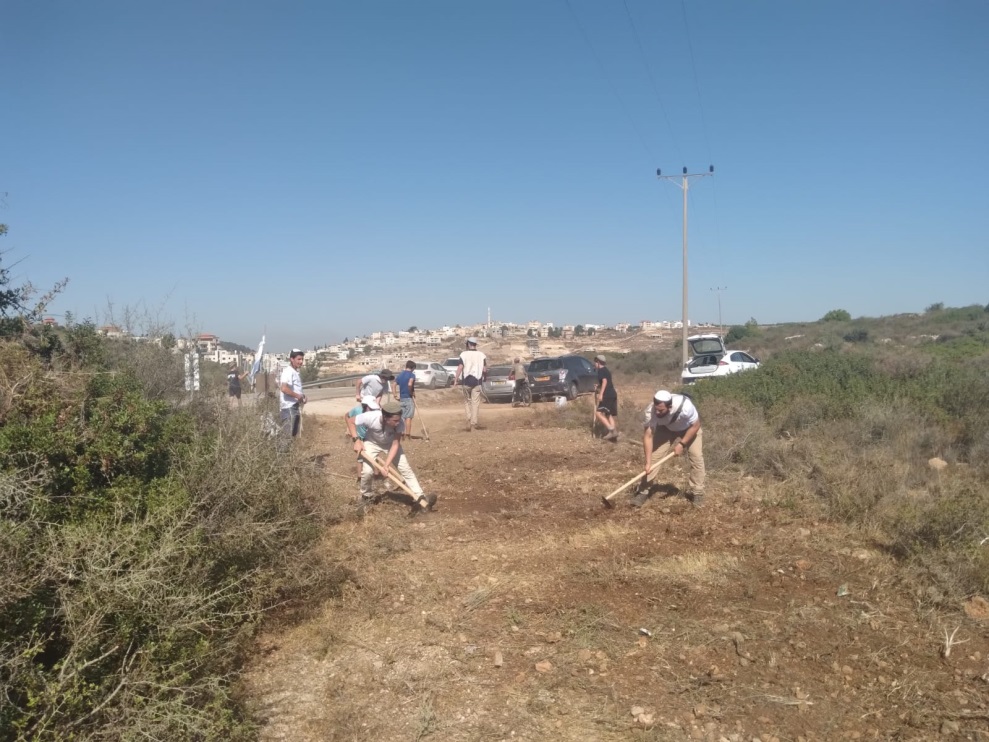 Let us jump then to this past Friday, July 29, which was Rosh Chodesh, the first day of a new Hebrew month.  On four of the six sites, morning (shacharit) services were held that included special prayers for the new month. 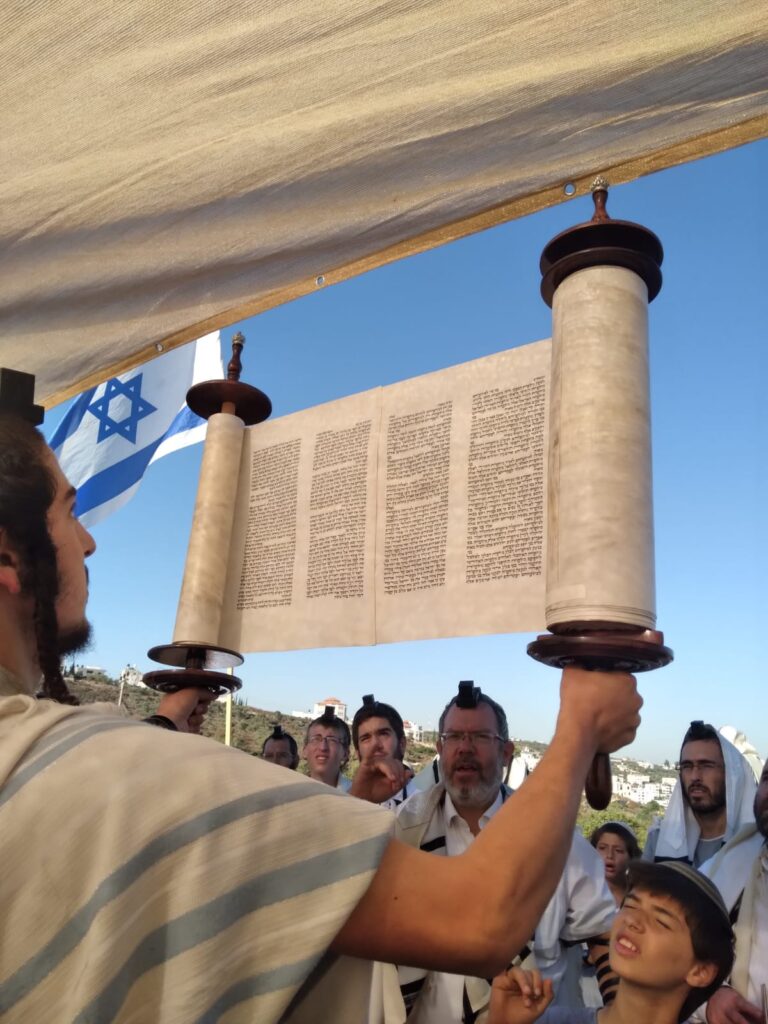 Not only were services permitted by the IDF, when Arabs from neighboring areas came down to disrupt and cause trouble, soldiers blocked them and drove them away – not once, but twice.

In the handful of days since Shabbat, there have been activities for kids and afternoon-evening prayers on at least some of the sites.

It brings a measure of joy to the heart to learn about this.  But we must remain mindful of the fact that it is a mere beginning, fraught with difficulties and inconsistencies.

As we track what is happening, we need to ask what brought about the apparent change in Gantz’s policy concerning the Nachala sites. There are, I believe, two closely related factors.

The first is with regard to the large volume of bad press the IDF action received on July 20 and 21.  Gantz is a man who aspires to be prime minister, Heaven forbid.  (More on this below.)  A good deal of negative PR does not serve him well, and it quite possible that the amount of press he received exceeded what he had expected.

Is it important, then, to keep this issue in the public eye now and in coming weeks:  It must not be allowed to fade in public consciousness.  Gantz needs to know that he is being watched and that hostility to the settlement movement will serve him badly with a solid portion of the electorate. He should be cut absolutely no slack on this issue.

For the bottom line here is that Gantz’s attitude towards settlement has not softened. The apparent changes were only cosmetic.  It is a question of what he imagines he can get away with.

Last Friday, on the very same day that Rosh Chodesh services were held on four of the Nachala sites in the morning, Gantz gave another order.  This order, however, went out towards evening, a mere two hours before the beginning of Shabbat.  It was with regard to the yeshiva in Homesh, in northern Samaria, which Gantz has harassed repeatedly.

Homesh was one of four Jewish communities evacuated by Ariel Sharon along with the expulsion of the Jewish communities of Gush Katif in Gaza in 2005. The yeshiva that had been on that site returned to re-establish itself, declaring that a Jewish presence is permissible there.

And what was the order Gantz gave on Friday?  To dismantle the solar panels that provided electricity to the yeshiva.  What this meant was that the students of the yeshiva not only had no light over Shabbat, they were not able to run fans during an intense heat wave.

This is perverse; it is vile and spiteful.  And it is how Benny Gantz operates.  The fact that he opted to cause a problem for observant Jews over Shabbat tells us a good deal about the sort of man he is. One does not need to be an observant Jew oneself to show respect for observance.  Gantz may view it differently, but the students of the yeshiva are not the enemy.

Criticism was forthcoming from many.  MK Yuli Edelstein (Likud), chair of the “Homesh First” caucus, asked, “…why does Benny Gantz always send troops just before Shabbat? Where does this obtuseness and disregard for the sanctity of the Sabbath come from?” While Orit Strook (Religious Zionists) focused on all of the security issues that Gantz ignores while he is spending time harassing the Homesh yeshiva.

Itamar Ben Gvir (Religious Zionists) declared Gantz to be far-left, someone who serves the interests of the PA.

Homesh yeshiva director Shmuel Wandy said that the army’s harassment of the yeshiva was an “obsession.” “They won’t silence the voice of Torah in Homesh,” he vowed.

And here we come to what some analysts believe is the main reason that Gantz softened his stance with regard to the Nachala sites: his relationship with Gideon Sa’ar, chair of New Hope and currently justice minister.

On July 10, Gantz and Sa’ar held a press conference to announce a formal merger of their parties that will allow them to run together in the election. They hope this will enable them to achieve gains that would be impossible for either party separately. In particular, they aim to draw from Yesh Atid voters.  (At present Yesh Atid is the second largest party in the Knesset, with 17 seats, compared to Likud’s 29.)

It is this merger that affords Gantz the opportunity to nurse the illusion that he might be prime minister.  And Sa’ar? Please understand that he identifies as right-wing.  It is a claim that is more farcical than ever in light of his new partner – although, yes, his supporters would be to the right of Gantz supporters.   At present, his party has six mandates and some early polls indicated that standing alone it might not pass the threshold in the next election.  So, hey, whatever keeps him in the game, right?  Political pragmatics over principle.

It does not take much then, to imagine a scenario in which Sa’ar, following IDF actions on the Nachala sites on July 20, said to Gantz, “Benny, Benny what are you doing?  You will drive my supporters away.”  And Gantz saying, “You are right, I will cool it.”

(Note: this is what I see as a reasonable, indeed likely, scenario, not a report of anything that I know with certainty transpired. But I have not found a single serious analyst who sees a different explanation for Gantz’s shift in position.)

I think it is important, as we continue to shine a light on Gantz’s behavior, to point out at all junctures that Sa’ar sees fit to partner with him.

I will, of course, return to the above issues. But here I want to segue to a related topic: some of the successes the Zionist right is seeing these days, in spite of all the aggravation.

Perhaps most important is a legal about-face that, as the Jewish Press writes, signals a return to sanity.  The short of it:

The yeshuv of Mitzpe Kramim, located in Binyamin, was established in 1999 by the Barak government and approved personally by then-Central Command Chief General Moshe Yaalon.  It was located on its present site after the “Outpost Agreement” was signed between then-Prime Minister Ehud Barak and the heads of the Yesha Council, in order to regulate outposts.

In simple terms, the yeshuv was established with official sanction and without doubts about the legality of its location.

That is, there were no doubts until the intervention of left-wing attorney Talia Sasson in 2005, who devoted enormous energy to identifying places where Jewish settlement may have infringed on Arab land, and submitted a report in this regard commissioned by then-prime minister Sharon.  Following this, came a Supreme Court order requiring the demolition of homes in Mitzpe Kramim, which was one of the locations fingered in Sasson’s report.

Now a Court ruling has reversed this position, stating that a real estate transaction made in good faith with an agency of the government stands even if it subsequently turns out that some of the land involved may be private Palestinian Arab property.  What is significant here is that the transaction had been done under the auspices of a government agency, and with good faith on the part of the individual(s) who would be building on that land.

In cases where Palestinian Arabs can prove ownership of a parcel of land, they are to receive monetary compensation.  Additional building within the yeshuv can only be within its present boundaries.

And so, 54 families that were going to be evicted from their homes will be able to remain.

What is more, there may be some 2,000 to 3,000 other families to which this ruling also applies.  This is true cause for celebration.

I am aware of instances – evidencing obvious hostility to the settlement enterprise – in which the demolition of an entire family home was required because one room or part of one room was found to be situated on private Arab land.  May this sort of outrage be a thing of the past.

A group of Jews moved into a new home in Hevron last week.  This is a building that was purchased legally from local Arabs by Jews of the Harchivi organization.  Called Beit HaHerut (the House of Liberty), it is situated close to the Machpelah (Tomb of the Patriarchs).  Built in recent years, it stood vacant for a long period of time. IDF soldiers are securing the new residents.

Declared Eliyahu Liebman, head of the Kiryat Arba-Hebron Council, “We have returned to our lands, we will return and buy more houses and more land to Judaize the area, we are not afraid to say it.”

No surprise that Peace Now is up in arms.  See more here about the rich Jewish history of Hevron – the second most sacred city for Jews after Jerusalem:

In anticipation of Biden’s recent visit, Prime Minister Lapid gave an order that the Jerusalem District Planning and Building Committee not convene during the president’s visit, to avoid angering him. But once Biden was gone from Israel Lapid did not rescind his order.

Interior Minister Ayelet Shaked, who is eager to show her right-wing credentials now (more on this very soon), then gave the order for the Committee to convene.  Two construction plans were discussed.

One, called “The Lower Aqueduct,” involves construction of about 1,500 new housing units that would connect the Har Homa neighborhood to the Givat Hamatos neighborhood.

The second plan, referred to as “Givat HaShaked,” involves about 500 housing units near the Beit Tzafafa and Shuafat neighborhoods.

Please understand that there is a long road from preliminary committee planning to actualization.  But this is a start.

From Israel: “Seeking Answers While the Head Spins!!”