Many of us here in Israel had not yet moved past the deep sadness we were carrying with regard to the terror attack in Ariel, in which a beautiful, caring young man had saved his fiancée’s life by throwing himself in front of her, right in the line of gunfire – sacrificing himself for her.  This was something she now has to live with.

But then, even before Yom Ha’atzmaut was over, there was news of another attack, in which three family men were taken down by terrorists in the haredi city of Elad. This time, the attack – which took the lives of Yonatan Habakuk, Oren Ben Yiftach and Boaz Gol– created three widows and 16 orphans.

As soon as Shabbat was over, I turned on my computer to learn if the two terrorists, who had still been at large before Shabbat, had been captured. They had not been caught yet last night, although they have been now (and more on this below).

What I found last night, as I scanned different sources, was information about the funeral in Elad on Friday. There had been a joint service and then each of the three was buried in a different location – in Elad, Lod and Jerusalem, respectively.

I learned that Habakuk’s widow had lamented on a Facebook page, “My heart aches that my tender child saw his father in his last moments.”  She was referring to her six-year-old, Yonatan, who was with his father, saw him battle the terrorist, and then receive the bash in his head with an axe that killed him.

She told Army Radio that her son said his father chose not to run away during the attack…her late husband put up a prolonged struggle against his attacker, allowing others to escape.

He is a hero, said Yonatan’s uncle, and his father was a hero. But Yonatan, after witnessing the extreme violence, needs special care.

Sadly, Yonaton was not the only young witness.  There were the four children of Shai Ben Shlomo, who is in critical condition.  The older ones ran away when the attack began, and left behind the two-year-old, who was sitting in a stroller.  She saw it all.  Two years old.

Then I encountered a video of the funeral.  On it, although we cannot see them because of the crowds, we hear the voices of the sons who are mourners, saying Kaddish, the traditional prayer of mourning.

One of the voices was of a young boy — at least 13 (he would not be obligated to do this at less than 13), but perhaps not much more. I thought about how awful that this should be, and I began to weep, and I wept and I wept.  For all of the innocent loss of life – 19 people killed in terror attacks in roughly six weeks, for all of the human suffering – of those wounded and those bereaved and those traumatized.

Early today (Sunday morning) the two terrorists were apprehended, hiding in a forest area about a kilometer from Elad. They have been identified as Palestinian Arabs from near Jenin. One of them confessed. Authorities believe they may have been hiding in a nearby school during a good part of the 60 hour search. An axe was located nearby.

My regret is that they were taken alive.  It is my opinion, and hardly mine alone, that they should have been dispatched summarily.

The particular attack they waged was gruesome in its violence.

So now they will stand trial and be put in prison – Heaven forbid they should ever be traded out of prison (as Yahya Sinwar was) – and we will feed them, and house them and give them perks far beyond the minimum Red Cross standards: recreation, education.

The remaining question here is how our government has responded to this attack, and will be responding. It is within the realm of possibility that something is being planned as a surprise attack (and I must acknowledge this).  However, there is no sign of this whatsoever.

Naftali Bennett is very busy trying to retain his coalition, which is on the edge of breaking apart.  I found his behavior during Yom HaZikaron and Yom Ha’atzmaut despicable in this regard: he politicized national events. This was particularly true during Yom HaZikaron when he said that in memory of those who have given their lives for the country, we should strive for unity.

My patience with all of this – as much as it may have existed previously — has totally dissipated.  What unity? I wanted to ask him. Unity with an anti-Zionist party that represents the Islamic Movement?  What about unity for the nation when he refused to sit with Netanyahu?  Then it apparently didn’t count.  Don’t tell me, unity.  This is about retaining a coalition so Naftali Bennett can still be prime minister.

At this moment, it is unclear if Ra’am is going to return to the government at all.  I will be tracking this and writing again later in the week.  It may turn out to be a busy week, politically.

What we know now is that if Israel were to go to war against Hamas, the coalition would be finished.  For there is no way Ra’am could remain in the government.  And so, soft-pedalling the response to Hamas is, for Bennett and company, the prudent approach.

But for the country it most certainly is not!!

Hamas has been inciting regularly.  Recently the message came out that, “Our Palestinian people and their heroic youth will not stand idly by in the face of the occupation’s crimes and its violations against our Jerusalem holy sites and the blessed Al-Aqsa Mosque.”

And then last week, Hamas head in Gaza, Yahya Sinwar, declared: “Our people in the Negev, the Triangle, the Galilee, Haifa, Jaffa, Acre, Jaffa, and Lod – everyone will furnish their own rifle. And those who do not have a rifle will furnish a knife or an ax.”   (Emphasis added)

It’s past time to take out Sinwar.

“Sinwar is a dead man and he needs to be assassinated immediately,” declared MK Yoav Gallant (Likud – pictured below), a former deputy IDF chief. “If it was up to me, he would be dead tomorrow. Assassinate him, no matter what the consequences are.”

Political analyst Ron Ben Yishai, who is tough but no right-winger, concurred: “Sinwar wants to spark a religious war, it’s time to remove him from the scene.”

While former deputy Shin Bet head Israel Hasson carried the thought further:  “I think Israel doesn’t need to ask if, but when and how it is going to take care of this problem called Hamas…This government is not only able to do this, it needs to do this, or we’ll find ourselves with much harder problems to solve.” (Emphasis added here and above) 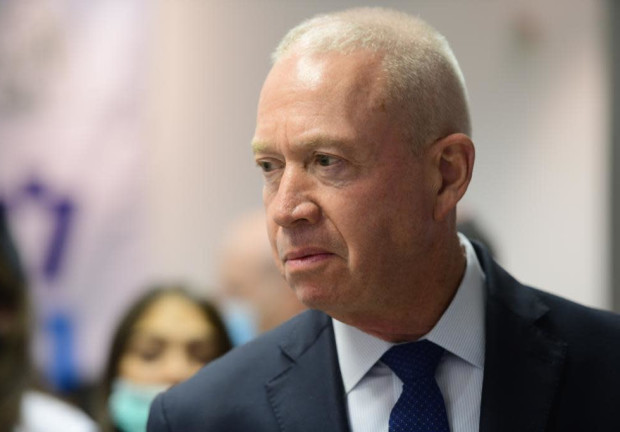 Before the latest attack in Eldad, Israeli security and diplomatic officials had sent messages via mediators to Hamas indicating that their recent incitement gave Israel freedom to respond militarily in Gaza.

There was also a threat specifically against Sinwar, who has been termed a “terror supporter” that Israel would be free to deal with in kind.

Then came the attack in Elad, and security officials are saying there is no way to link Hamas specifically to this attack. Seriously?  The fact that Sinwar called for reliance on axes when necessary and these terrorists used an ax is irrelevant?

What is apparent now is that the earlier messages about Israel’s “freedom to respond militarily” were only words.  Far better had nothing been said if there was not going to be follow through.  This was an empty threat, made, I suppose, with the hope that it might modify Hamas behavior.  Foolish, foolish.

Sinwar, for his part, yesterday responded to Israeli threats on his life:

Hamas will carry out suicide bombings and “burn” Israeli cities if Jerusalem resumes its policy of targeted killings of Hamas leaders. “The return of assassinations means the return of the explosive operations inside [Israeli] cities,” Hamas told Egyptian mediators.

Haaretz has reported that Israel may be considering “more moderate action, such as reducing the number of permits for Palestinian workers to enter Israel or freezing the permits altogether.”

If this is true, that would really do it.  Can’t you see Hamas leaders quaking in their boots over this, and resolving to moderate their methods?

I haven’t wept over this. Yet. But I could.  Because it is shameful and dangerous. Every time Israel looks weak it is an invitation for more violence. Israel needs a new, responsible government like yesterday.

As I prepare to send this out, there is news of a stabbing of a police officer at Damascus Gate. The attacker has been subdued but I have no information as to the condition of either one.

From Israel: Ay! That Was Fast!!

From Israel: “Because We Absolutely Must!!