From Israel: Complications and Imperfections

It’s not your imagination, or mine:  The world is shifting at a dizzying rate.  We try to wrap our heads around it all.  We try, but it sure isn’t easy.

~~~~~~~~~~
I want to start with the Trump-Kim Summit, which delighted me and many others, wrought with the potential for failure though it still may be (and which the habitual nay-sayers were quick to point out).

This summit represents a break-through. Founded on a totally unexpected positive dynamic between the two world leaders, it provides a promise of a peaceful future for the Korean peninsula and of a less threatening world situation. 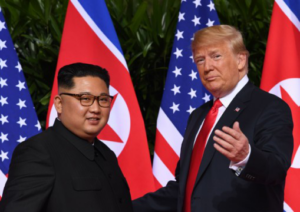 No, that personal dynamic is not sufficient, in and of itself, to guarantee the final desired result. But it was essential for kick-starting the process.  Turns out that the two hit it off; this was sort of amazing, when we consider Kim’s hostile behavior and the bellicose threats by Trump that preceded this meeting at one point.

Among the lessons to be learned here is that Trump is much less of a loose cannon than many perceive him to be because of his, shall we say, less-than-diplomatic deportment.  I suspect that a good part of the time he knows exactly what he is doing — he is consciously and deliberately less-than-diplomatic, and it turns out that keeping his opponent guessing was a productive strategy.

The other lesson – and this is of critical importance – is that when dealing with autocratic tyrants such as Kim, it is the tough stance and not the conciliatory one that offers the best chance of yielding positive results.

Trump has adopted a similar stance with Iran: it is likely that a number of the mullahs had coronaries when they saw Kim agree to go non-nuclear.

If nothing else comes of the Singapore Summit, it has now rendered Iran weaker.

Fervently do I long to see this lesson carried over to how the Palestinian Authority is dealt with.  I am not yet entirely reassured on this score – and I’ll get to that.
~~~~~~~~~~
The text of the agreement signed between Donald Trump and Kim Jong Un can be seen here:

Essentially, it commits the DPRK (Democratic People’s Republic of Korea) to full denuclearization of the Korean Peninsula, and recovery of all MIA/POW remains and their full repatriation.

The only commitment by Trump written into the document involves security guarantees for the North Korean regime.  In his press statement after the signing, he clarified that no sanctions were being lifted yet.  This is as it should be.

There is concern that Trump might weaken if he is pleased with progress, but in dealing with someone like Kim, holding tight is important.  One of the motivating factors for Kim in coming to Singapore was the dire economic situation of North Korea right now.
~~~~~~~~~~
Unofficially, Trump – in a “good faith” gesture – announced that the US will stop holding joint military maneuvers with South Korea. Maneuvers scheduled for August are expected to be cancelled.

The president – who delayed his decision on this until he had a feel for his interaction with Kim – explained that North Korea considers these joint maneuvers to be “provocative.”  The Pentagon, however, has always described them as “defensive,” and South Korea is less than pleased with this announcement.

The Trump administration has made it clear that maneuvers would be resumed if there were not satisfactory progress with North Korea going forward.
~~~~~~~~~~
There is criticism regarding the summit primarily in two regards:

First is that the agreement has no specifics for achieving the denuclearization.  Trump’s response is that this summit is the beginning of a process.  What is encouraging is that this will be overseen by former head of the CIA and current Secretary of State Mike Pompeo – who is, himself, tough and clear-eyed.  Pompeo is estimating that “major disarmament” can be achieved in about two and a half years, before the end of Trump’s first term.  He expressed himself confident that the North Koreans “understand that there will be in-depth verification.”

Engagement between the parties is to begin in about a week.

http://www.israelnationalnews.com/News/News.aspx/247414
~~~~~~~~~~
And then, questions have been raised regarding the need for the president himself to be so directly involved at this early stage.  Here, comparisons have been made between how North Korea is being dealt with, and how Iran was handled.

With Iran, however, the goal was to stop a country that did not yet have nuclear capability from achieving it.  In the case of North Korea, the US has been dealing with a nuclear nation that has been very hostile.  In this instance, it was considered appropriate to bring forth the maximum in diplomatic weight.
~~~~~~~~~~
It remains to be seen how successful the final negotiations will be.  But my own opinion is that President Trump, for having gotten this far, merits accolades.

It may well be that the course of history has been changed for the better.

There are those who are comparing the Singapore Summit to the meeting in Reykjavik, Iceland between President Ronald Reagan and Soviet Secretary General Mikhail Gorbachev in 1986.  A cordial rapport was established between the two, and while this summit was ultimately unsuccessful, it was considered historically to be one of the most important:  It set the stage for the Strategic Arms Reduction Treaty a few years later. 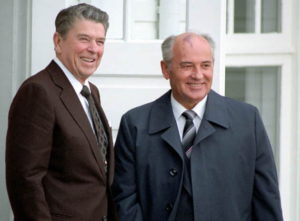 https://www.thereaganvision.org/the-reykjavik-summit-the-story/
~~~~~~~~~~
At about the time that Trump was preparing to go to Singapore, US Ambassador to Israel David Friedman was called back to Washington for discussions about the “peace process.”

I commented then that it seemed a strange time, with Trump unavailable.  Unless, I speculated, Trump was so optimistic about the possibility of success in Singapore that he wanted to move forward with Middle Eastern challenges while the mood was upbeat.

Now it is more than just speculation that Trump hopes to move quickly on the “peace process: It has been announced that Jared Kushner (left, below) and Jason Greenblatt will be coming to the region next week. 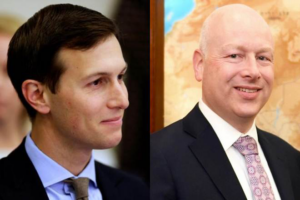 The persistence of the “peace team,” as they move forward with their plans, has been bewildering for some time. It makes little sense because of the overt hostility of the PLO to the US, especially following the moving of the embassy.

Abbas publicly leveled a curse at Trump at one point some months ago, and now declares he will have nothing to do with the Trump administration.

More recently Greenblatt has been at it with the PLO’s Saeb Erekat, formerly PLO chief negotiator.  In an editorial last Sunday entitled, “The Palestinians Deserve So Much More Than Saeb Erekat,”Greenblatt wrote that Erekat’s words consist of “unhelpful rhetoric and false claims.”

“For far too long, the United States has turned a deaf ear to such words, but ignoring hateful and false words has not brought peace and it will never bring peace.”

The only logical explanation that I have uncovered for the team’s persistence in pursuing a dead end process is this:  The Trump administration knows full well that there will be less than no progress with the PLO.  They continue in any event because the cooperation of the Sunni Arab states is important and they have to show that every effort has been made.

I had thought some while ago that Trump envisioned a regional peace deal rather than an Israeli-PLO deal. But this is not what is being referred to here.

According to one report announcing the forthcoming arrival of Kushner and Greenblatt, there are no plans for them to meet with Palestinian Arab leadership (unless they request such a meeting).  Rather, they will be consulting with “Israeli, Egyptian and Saudi Arabian leadership for input on when might be best to release the detailed peace plan, which is largely finished.”

Surely there is more to it than this.  Another source says the team will be discussing details of the plan, which will not be released until August.

https://www.timesofisrael.com/shin-bet-says-thwarted-250-significant-terror-attacks-since-january/
~~~~~~~~~~
Friday is Eid al-Fitr, the holiday marking the end of Ramadan, and Hamas has threatened to release 5,000 incendiary balloons.

The IDF is not going to take this quietly.