From Israel: A Reluctant Exit

It was difficult this year to leave the rarefied atmosphere of the Sukkah.

But, of course, I did leave, and, as is my practice at the end of a holiday, I surveyed the news in some detail.  It was a shock because I had a sense that the world was out of kilter: with an unusual preponderance of bad news.  Heaven help us!  I thought.

But we are not supposed to linger in that rarefied atmosphere.  We are meant to learn our lessons and gather our strength and go back into the world, especially when it is out of kilter. 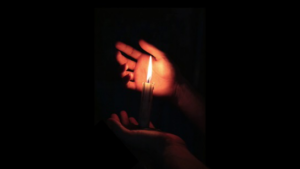 ~~~~~~~~~~
A situation that is unremittingly dark is the violence that continues at the Gaza fence, and with regard to the incendiary balloons. It is escalating again.

Last Friday an estimated 20,000 Gazans gathered at different locations along the fence, burning tires to create that horrible, toxic black smoke. Over 100 bombs and grenades, as well as rocks, were hurled at our soldiers.  Several Gazans tried to break through the fence. 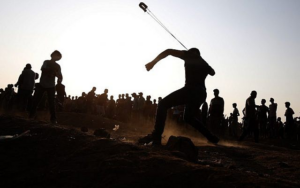 The IDF responded with tear gas, live fire, and air strikes.  Seven people were killed, including two boys.  But our response is not sufficient.  Not nearly.

While the worst violence is on Friday, leaking into Saturday, unrest at the fence is now commonplace all week long.  Each evening, for example, thousands of Arabs demonstrate violently at the Erez crossing.

Add to this the fires from incendiary devices. Last Friday at least 16 fires were started in the area near Gaza.
~~~~~~~~~~
The increase in violence is being linked to a breakdown in efforts by Egypt to forge a long term ceasefire (whatever it might be called) between Israel and Hamas.  I consider the breakdown a good thing, as that long-term deal would only mean kicking the can down the road, while giving Hamas an opportunity to strengthen.

At the same time, efforts at reconciliation between Hamas and Fatah have also failed.  In point of fact, Abbas has promoted the crisis, because he was not securing the control in Gaza he wants.  So we are seeing a desperate Hamas, stoking the violence in an attempt to pressure Israel to open the gates.

There are reports that Hamas may be preparing for war.

Back in late August, Yahya Sinwar, the head of the Hamas politburo in Gaza, shared a major presentation with a group of Arab writers on his strategy for a long-term truce with Israel, which he expected to achieve by mid-October.

If an agreement was not reached, Sinwar told them, Hamas would cause chaos with mass protests at the Israeli-Gaza border. An analyst who was at the meeting explained: “If there is no deal he made it clear that Hamas will turn the table upside down on the heads of everyone. The Israelis, the Palestinian Authority, the Egyptians, everyone. Everyone is going to suffer.”

http://www.jewishpress.com/news/eye-on-palestine/hamas/hamas-boss-if-theres-no-deal-by-mid-october-everyone-is-going-to-suffer/2018/10/04/
~~~~~~~~~~
Following a security assessment, IDF chief of staff Lt. Gen. Gadi Eizenkot, announced today that there would be an increase in the deployment of troops in the border area in anticipation of further escalation.

While in a press conference with Angela Merkel today (more on this below), Prime Minister Netanyahu, said (emphasis added):

“In the past year, [Palestinian President Mahmoud Abbas] has complicated the situation in Gaza by strangling the transfer of funds from the Palestinian Authority to the Strip.

“As a result, pressure has been created…

“If Hamas thinks it can attack Israel as a result of such distress, it is making a big mistake.”

I had wondered about a pre-emptive strike by Israel, in light of how matters are unfolding.  But my guess is that there won’t be:  In all likelihood, we will increase readiness, wait to see what evolves, and respond speedily and with great force if necessary. At the same time that Sinwar – as vicious and devious as they come – is provoking violence, he is declaring he does not want war.
~~~~~~~~~~
It is yet another piece of bad news that Russia delivered those S-300 surface-to-air missiles to Syria on Monday.  Four batteries were provided, along with 49 various pieces of equipment such as radar and launchers.  It will take approximately three months for Syrians to be trained in operating this equipment.

You can see Russian video footage of the delivery here:

https://www.ynetnews.com/articles/0,7340,L-5362852,00.html
~~~~~~~~~~
US Secretary of State Mike Pompeo has called the introduction of the S-300 missiles into Syria a “serious escalation.”  It is that, and good to know that the US is behind us here.
~~~~~~~~~~
However, in the course of an interview on Wednesday, Regional Cooperation Minister Tzachi Hanegbi (Likud) diminished concern about these missiles, stating unequivocally that they would not “clip Israel’s military wings.” 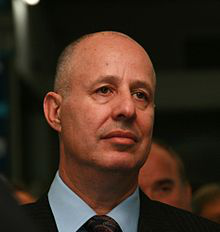 “You know that we have stealth fighters, the best planes in the world. These [S-300] batteries are not even able to detect them.”  He suggested that the missile batteries might even be destroyed on the ground (i.e., before being launched).

Hanegbi was referring to the F-35 Joint Strike Fighters, built by Lockhead Martin, that Israel began acquiring from the US last year.

These stealth planes are the most advanced in the world. To date, Israel has received delivery of 12, and reportedly plans to acquire 50 by 2024. These fighters, which are customized for Israel, have been dubbed the Adir, Mighty One. 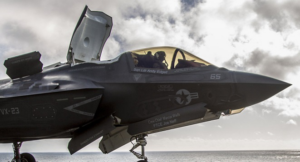 ~~~~~~~~~~
An interesting side note: There are unconfirmed reports that, in 2015, which was before Israel had F-35s, the Israeli Air Force practiced defeating the S-300 in Greece, which is in possession of those Russian missiles.

Brief remarks here about the visit of German Chancellor Andrea Merkel, which has been considered a big deal.  She is counted as a friend of Israel – declares herself a friend, and so I know that positive communication with her is important.

Perhaps especially important because of the points of disagreement.  Yet it is the disagreements that make me exceedingly uneasy with her, whatever her declaration of caring for Israel. She is so much the face of the left-wing EU, which takes stands that are antithetical to Israel. Like other members of the EU, she also imagines she can tell us what is in our best interest, stating, for example that she is against our Jewish Nation State law or that we should not dismantle illegal Bedouin villages. (Who asked her?)

Ron Prosor, former Israeli Ambassador to the UN, has written an op-ed that addresses these concerns.  “Too many times,” wrote Prosor, “Germany’s policies tend to contradict Israel’s national and security interests…”  He touches on a few such policies, including: 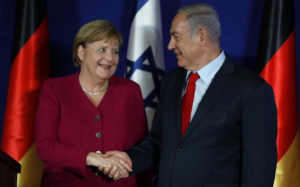 ~~~~~~~~~~
There was a big hullabaloo in the north within the last several days in response to Prime Minister Netanyahu’s UN talk.  He revealed, first, a “secret atomic warehouse” in Teheran that allegedly “contained nuclear materials that Iran is not allowed to hold without declaring them to the IAEA.”

Netanyahu said the IAEA had known about this for weeks but failed to act, and that 15 kilograms of radioactive material had been removed in August and dispersed around the city.

Iranian officials mocked and insulted and threatened Netanyahu, saying there was nothing in that warehouse but some old hardware.

Our prime minister has made them uncomfortable, a good thing to do. But it is perhaps more important that he was able to shine a light on the inaction of the IAEA, which is nothing new. “Let them check it out!” he challenged, but they did not act.
~~~~~~~~~~
Then there was Netanyahu’s exposure of secret missile sites in and around Beirut allegedly for the production and storage of precision missiles.

Three days after this accusation was made, the Lebanese Foreign Minister Gibran Bassil took 73 foreign envoys to the sites, to show them there was nothing there.  But, charged our prime minister, they waited three days so that they might clean out the sites. “A fraudulent propaganda tour,” he called it.

I have no idea what the 73 envoys concluded, but I believe that it is good that Hezbollah knows we are on to them.  Israeli Intelligence has for years been able to identify where missile caches are hidden in Lebanon.
~~~~~~~~~~
On Wednesday, UN National Security Advisor John Bolton announced to the press that (emphasis added):

“The president has decided that the United States will withdraw from the optional protocol and dispute resolution to the Vienna Convention on diplomatic relations. This is in connection with a case brought from the so-called State of Palestine naming the United States as a defendant, challenging our move of our embassy from Tel Aviv to Jerusalem.” 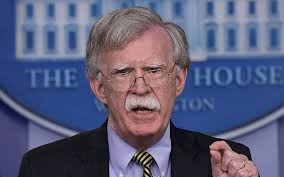 In other words, the US was not about to participate in allowing a two-bit group that called itself a state drag it into the International Court of Justice.

When queried about the “so-called State of Palestine,” Bolton responded:

It’s not a state now. It does not meet the customary international law test of statehood. It doesn’t control defined boundaries, it doesn’t fulfill the normal functions of government. There’s a whole host of reasons why it is not a state…”
~~~~~~~~~~
One of the situations I found to be the darkest in the last several days is the way in which Brett Kavanaugh has been treated in the course of a Senate enquiry into his eligibility to sit on the Supreme Court.  It has been a travesty of justice, hypocritical, mean-spirited in the extreme, and a great deal more as well.

My heart went out to Kavanaugh and his family because of how he has been demeaned.  And I may yet come back to this. 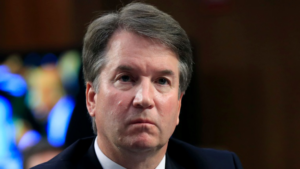 But most of all I understood that the integrity of the Senate itself was at stake.

I share here the furious comments of Senator Lindsey Graham (R-SC), in the course of the Senate Judiciary Committee hearing. This perhaps says it all.

As things stand now, as I write, the latest FBI inquiry has turned up absolutely nothing and there is expectation that within the next few days Brett Kavanaugh will be confirmed.

Let us pray that some light shines in the halls of Congress, however belatedly.
~~~~~~~~~~