From Israel: The Fix Will Not Be Quick

However, while we are in a better place than we were several days ago, we still have a long way to go. A good deal depends on the good will and the intentions of various parties within the coalition, with its count of 61.

It depends on a readiness of all to pull together and take the long view for Israel’s sake.  That’s a tall order.
~~~~~~~~~~
There is, for example, Finance Minister Moshe Kahlon, who broke away from Likud and in 2014 founded the centrist Kulanu party, which is in the coalition. 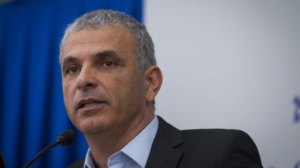 I did not write about him when I last described the situation, even though he had been talking about elections.  Prime Minister Netanyahu had spoken with him and I had not imagined that he was going to be a major problem.  My mistake, I suspect.  He is continuing to make waves – to suggest that the coalition is not viable and that an early election is necessary.  The coalition is not viable if members act as he is acting.
~~~~~~~~~~
More importantly, I think, the success of the coalition will depend on actions that Netanyahu takes in the security/defense sphere. I’m seeing an interesting statistical anomaly:  While polls indicate that Likud is recovering from its drop (which, actually, may make Netanyahu less worried about early elections), there is also an indication that a majority of Israelis did not buy the prime minister’s “classified information” reason for decisions made with regard to Gaza.  The public is waiting for a coherent, tougher policy, which is not “classified,” followed by the appropriate action.
~~~~~~~~~~
Words just don’t cut it now.  Public Security Minister Gilad Erdan (who, not coincidentally, happens to be Likud) has put out a statement that Israel is “closer than ever” to re-taking control of Gaza and targeting Hamas leaders. 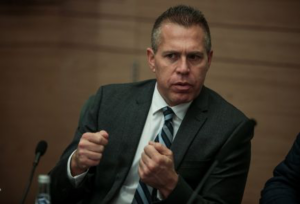 But how cheap this verbal bravado is!
~~~~~~~~~~
It has been suggested, more than once, that Netanyahu actually wants Hamas to stand so that he does not have to deal with Mahmoud Abbas, who would demand a Palestinian state were he given the opportunity to take over Gaza.

There was a time, not so many years ago, when we assassinated leaders of Hamas.  In the last go-round we warned them to leave so we could bomb empty buildings.  There was also the insane decision to continue to send in supplies even when rockets were being launched.  From this perspective, the fight against Hamas was not real.  As Hamas leaders know this, they are emboldened.
~~~~~~~~~~
Says Maj. Gen. (res.) Gershon Hacohen:

“The Hamas leadership certainly knows the strength of the IDF relative to the strength of its own forces. But it bases its decisions not on that calculation but on its assessment of the constraints that prevent the Israeli government from making the decision to go to war. During the regular riots Hamas has led along the border since the spring, the group has learned its way through the Israeli strategic labyrinth.”

https://besacenter.org/perspectives-papers/israel-security-concept/
~~~~~~~~~~
Chief of Staff Eisenkot, not surprisingly, has defended the IDF against Bennett’s charges that soldiers are more afraid of the lawyers posted with them than they are of Hamas.

That Bennett spoke out about these matters is one of the prime reasons why I said we now have hope. It’s an old story:  we cannot fix a problem until it is named.

Bennett spoke truth.  I have talked to soldiers in the field: there are times when they are reluctant to take action. They need to feel the system has their backs, and sometimes that is not the case.
~~~~~~~~~~
And then there are situations that fall within the jurisdiction of the Civil Administration, which, operating under the authority of the Ministry of Defense, governs Judea and Samaria.

Frequently the Civil Administration is disinclined to move ahead with an operation, even though it is legal within our system and has been sanctioned by our courts – because that operation is being criticized in the EU or the UN, or because of fear that charges of war crimes will be brought.

Bennett mentioned the illegal Bedouin outpost of Khan al-Ahmar, which has considerable strategic significance. It is still standing and should not be.  I shared this before and provide it again here, for clarification.

Along with many similar situations, there is also this:

“How was an illegal PA city established in the Hevron hills?

“Supreme Court to hear petition against Civil Administration’s failure to enforce the law over thousands of acres in Hevron hills.”

http://www.israelnationalnews.com/News/News.aspx/254985
~~~~~~~~~~
Binyamin Netanyahu is now Minister of Defense and will have direct responsibility for these situations. He has told us he is strong and knows what to do.  Much will depend on how much this proves to be the case.
~~~~~~~~~~
Many believe that the situation to our north, which requires vigilant combat readiness, inhibits IDF inclination to take on Hamas in any major fashion.

This does not mean we cannot be any tougher than we were in our last go-round!  And some analysts, such as Maj. Gen. (res.) Hacohen, cited above, speak about the need for Israel to be prepared to fight on multiple fronts simultaneously.

However, this said, we need to face the scope of the threat we are facing.

Gideon Sa’ar – a former minister and Security Cabinet member, currently working on his political comeback – spoke at the Jerusalem Post Diplomatic Conference.  He called for an Israeli strike on precision weapons factories in Lebanon that Hezbollah is developing.

“If an Israeli preemptive strike is not carried out in the near future, the window of opportunity may be closed. This means that future attack might be far less effective and will involve a much heavier price,” he warned. 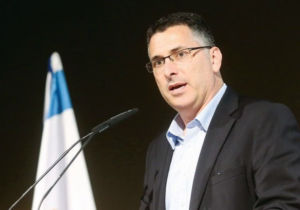 ~~~~~~~~~~
What Sa’ar is referring to is an attempt by Hezbollah, over the course of this past year, to convert inaccurate surface-to-surface missiles into precision missiles.  This project is funded by Iran, which is also providing the technical know-how.

Israeli security officials are monitoring this situation closely and do not believe that Hezbollah has yet achieved the conversion of missiles.

Prime Minister Netanyahu referred to this project during his speech at the UN GA in September, during which he declared, “Israel also knows what you’re doing. Israel knows where you are doing it and Israel will not let you get away with it.”

Where Hezbollah and Iran are concerned, I have considerably more confidence in the readiness of the prime minister to be tough. In the north he is not entangled in the sort of complexities that taking down Hamas involve.
~~~~~~~~~~
With regard to Syria, there is positive news (emphasis added):

“Iran’s military capabilities in Syria are far from what the Islamic Republic had sought, thanks to Israeli action, IDF Chief of Staff Gadi Eisenkot (on left in picture below) said Tuesday [yesterday].

“The comment was the clearest indication yet that Israel believes it is nearing victory after a several-year campaign to keep Tehran from gaining a foothold near the Golan Heights, though other officials have warned Iran and its proxies still pose a challenge in the area…

“The army chief praised the IDF Northern Command for its effort in blocking Iranian forces from establishing a permanent military presence in southern Syria, near the Israeli border, and from transferring precision-guided missiles to the Hezbollah terrorist group in Lebanon…

“’The fact that their abilities are far from what Iran and terror groups desired is the result of high-quality, ongoing operational activity,” Eisenkot said, while visiting the Northern Command’s Bashan Division in the Golan Heights.

“’The IDF will continue to thwart these efforts [by Iran and Hezbollah], while preserving the security situation in the north in the long term…’” 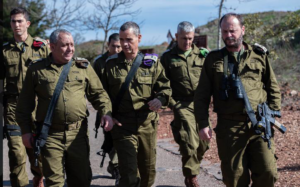 ~~~~~~~~~~
Since Syrian anti-aircraft missiles brought down a Russian jet, on September 18, causing the death of all 15 aboard, tensions have been high between Russia and Israel.  Israeli planes had been in the area a short time before, having executed an attack on a Syrian facility near Latakia connected to chemical weapons and missile development programs.

Those Israeli jets were back in Israeli airspace by the time the Russian plane was hit. Yet the Russians, furious and agitated by what had happened, chose to say that Israel was responsible; this was apparently preferable to pointing a finger at their Syrian client.

What had been a solid and constructive relationship between Prime Minister Netanyahu and Russian President Putin then soured, with the Russians uninterested in responding to Israel’s requests for a meeting.

Israeli and Russian military had maintained what was referred to as a “deconfliction” agreement, to coordinate activities in Syria.  Israel was most eager to sustain this, as it continued to be critical to do sorties in Syria to control Iranian involvement in the country.

At some point recently, Israel did acknowledge that some flights had been run into Syria following this incident. And now there may have been a break-through:

In spite of Putin’s refusal to schedule a formal meeting, Putin and Netanyahu did meet on the sidelines of the event in Paris on November 11th commemorating 100 years since the end of WWI.

Netanyahu referred to the meeting as “good” and “very important.”  ~~~~~~~~~~
As tomorrow is Thanksgiving in America, I want to wish all who are going to celebrate a lovely day, complete with family and friends; football games, parades, and turkey with stuffing. Oh, and pumpkin pie.