Last Thursday, the committee of the “Great March of Return” announced that they had moved the “tents of return” 50 meters closer towards the border “as a message of persistence from our people to the world that we are moving forwards towards our rightful goals.”

The tents had been set up inside Gaza 500 to 700 meters from the border.  This move is not problematic from a security perspective – rather, they are thumbing their noses at us.
~~~~~~~~~~
When visiting the area on Friday, on the Israeli side, Defense Minister Lieberman told reporters:

“We are fighting an uncompromising battle here, and the other side must understand — there is a determined army here.

“Every week there are fewer people, but much more terror activity.”  (Emphasis added)

~~~~~~~~~~
The rioters at the fence continue to burn tires to generate smoke, and use catapults and slingshots to launch rocks at the IDF soldiers on the other side of the fence.

They also launch kites carrying firebombs. This more recent tactic has been going on all week: we have had to maintain fire-extinguishing equipment adjacent to Gaza to put out fires that have been started on our side.

On Friday, IDF spokesman Jonathan Conricus tweeted a picture of this kite, with a swastika: 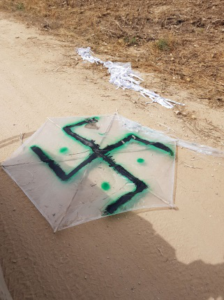 Most significantly, some “protestors” carry wire cutters to be used to breach the fence.
~~~~~~~~~~
On Friday, four people were killed, one a teenage boy.  His status as a minor does not mean, however, that he was just an innocent kid hanging around. Quite the contrary.

A preliminary IDF investigation indicates that Mohammed Ibrahim Ayoub was in the process of breaching the fence.  He had already crossed over a barbed wire barrier and was headed towards the main fence.

The investigation is still on-going.  But our usual critics wasted no time in raising an outcry.
~~~~~~~~~~
Lieberman correctly charged that Hamas is responsible. The terrorist group encourages young people to come forward with two goals in mind:

[] To promote incidents that can be used against Israel, as in this instance

Nowhere was this outrageous tendency of Hamas to use young people for its ends more blatant than in the incident, during the first Friday “protest,” of a seven-year-old Palestinian Arab girl sent through the fence.  The IDF ensured her safe return, but you can bet this is not what Hamas was counting on.

http://www.jpost.com/Breaking-News/Hamas-sent-7-year-old-girl-across-border-fence-547528
~~~~~~~~~~
Early on Friday the IDF dropped leaflets warning people to stay away from the fence.  They read (emphasis added):

“You are participating in violent disturbances. Hamas is using you to carry out terror activity. The IDF is prepared for every scenario. Refrain from approaching the fence or damaging it…

“The IDF will respond to any attempt to damage the barrier and its components…Hamas is using you to promote its political interests. Don’t follow Hamas’s orders, which endanger your lives.”

According to an IDF statement:

“Our forces used a series of measures to disperse rioters and in certain cases, when there was no alternative to stop the danger, they used live fire according to rules of engagement…”
~~~~~~~~~~
International lawyer Alan Baker, Director of the Institute for Contemporary Affairs at the Jerusalem Center for Public Affairs, writing on this issue, refers to the “obvious and transparent hypocrisy” of the international “leaders” who are quick to call for one-sided international investigations “whenever Israel acts to…prevent attempts to illegally and violently invade the border.” (Emphasis added)

Baker points out that the provisions of Oslo II of 1995 with regard to the “Delimiting Line” (the border) with the Gaza Strip called for a “Security Perimeter” on the Gaza side of the border: “special security measures aimed at preventing infiltrations across the Delimiting Line or the introduction into the Security Perimeter of any arms, ammunition or related equipment… (Emphasis added)

Says Baker: Anyone claiming that the border is unilaterally imposed by Israel and that the security perimeter is unauthorized should be reminded of these agreed-upon provisions.”

http://jcpa.org/the-events-along-the-border-with-gaza/
~~~~~~~~~~
Law Professor Eugene Kontorovich, writing about a similar incident some years ago, stated: “The press has taken to calling the Arabs marching across the Israeli frontier ‘protesters.’ In fact, ‘protests’ are contained within a country; the organized crossing of a frontier is an invasion.”

Kontorovich typically, and with great effect, demonstrates how different standards are applied by the international community to Israel than those applied in other similar situations in the world.

https://www.nationalreview.com/2011/05/new-arab-tactic-against-israel-eugene-kontorovich/
~~~~~~~~~~
The issues are especially complicated at the Gaza fence because there is no distinct and readily identifiable armed force operating within the mob.  Hamas fighters not only pose as civilians, they move amongst civilians who serve as shields.  What is more, those civilians often do the bidding of Hamas in acting violently.

A report issued by the International Committee of the Red Cross asks the question in a broader context:

“One expert expressed the view however that, in some wholly exceptional cases, rioting civilians can be considered as directly participating in hostilities if they are performing acts of violence which are specifically designed to harm directly the State having to face the riot in support of its enemy.”

(With thanks to Bennett R.)

Please note, and this is important, that the ICRC statement in no way stipulates that the civilians performing acts of violence must be armed to be considered directly participating in hostilities.

The charge against Israel is often that the IDF shoots “unarmed” civilians.  In the first place, arms are often hidden so that there is no way to truly determine whether riot participants were unarmed.

But this carries the argument further:  Attempts to breach the security fence are overtly hostile acts.
~~~~~~~~~~
I remind my readers that Hamas controls Gaza by virtue of a coup against the controlling PA (Fatah) in 2007.  In recent months there have been attempts at reconciliation between Hamas and Fatah — always doomed to fail because of the inherent tensions between the two groups.  Fatah was supposed to re-establish administrative control in Gaza but was prevented from doing so by a totally unsurprising refusal of Hamas to turn over its cache of arms and rockets to the PA.

Now with regard to the current “protests”—instigated by Hamas in some part to show that it is the “dominant voice” for the Palestinian Arabs—comes this report from the Jewish Press, citing the Palestinian Arab Ma’an news agency (non-government affiliated):

The Palestinian National Liberation Movement (Fatah) on Sunday protested an attack by Hamas and its armed forces on the funeral tent of Mohammed Ayoub, the 14-year-old Gazan boy who was killed at the border riots last Friday.

A press statement issued by the Fatah Information, Culture and Intellectuals Committee, said that “the dismantling of the tent and shooting inside it and the intimidation of the citizens and the attack on the leadership of Fatah in the northern Gaza Strip and wounding them was a departure from national values.”

We see then, clearly, that this protest is part of the internal Hamas-Fatah conflict, although I don’t claim to understand all of the particulars here.

Was the family of Mohammed Ayoub affiliated with Fatah in Gaza?  Did Fatah co-opt his mourning?  Whatever the case, there was no respect for the deceased or his family, no matter how impassioned were the Hamas charges against Israel with regard to the shooting.

This is an insider view of the degree to which civilians are merely pawns serving the interests of Hamas.
~~~~~~~~~~
This will go out now with other issues to be explored shortly.  And, rest assured, there is no lack of issues.
~~~~~~~~~~

From Israel: Rejoice in the Miracle