The last couple of weeks have been “kaitana savta” — grandma camp, a very special time for me.  When the kids are here, they are my first priority. Now that camp is over, I began to consider what to write about in this posting. And what I found was that bad news is coming at us from all sides.

The corona numbers are on the rise and the government is making very unwelcome noise about a lockdown; we’ve been bombarded by rockets from Hezbollah in Lebanon and incendiary balloons from Gaza; Iran has a new president known as “The Butcher of Tehran” who has already hosted representatives of several Palestinian Arab terror groups.

In due course, I hope to devote serious attention to each of these matters, and more.  But today, I want to vault over all of them and focus first on good stuff.

Sometimes our souls require this.

(But please do read to the end for some important information and an action alert regarding a serious matter of a distressing nature.)

News that is most definitely good came to me last night, and I share it here with joy.  More than good news, it qualifies as a miracle:

In the picture below you see them at the time of their wedding.

In December of 2018, Shira and Amichai had been wounded, along with five other people, in a terrorist drive-by shooting at the Ofra Junction in the Shomron.  Shira – the daughter of Liora and Chaim Silberstein – was seven months pregnant at the time of the attack.  She was shot in the lower abdomen and wounded critically.  Her baby boy was delivered by emergency C-section and every effort was made to save his life; but after three days he succumbed.

As he was dying, his parents left their hospital beds to hold him for a short while and say goodbye. At that point Shira declared that she would show everyone, she would have other children.  The baby was then buried in the Mount of Olives, at which time he was given his name: Amiad Yisrael, the Nation of Israel is eternal.

Shira, of course, has needed time to heal. There was rehab, and coping with post-traumatic stress. But she faced it all with courage and determination. And in the end she came back to Shaare Zedek hospital, where she had been after the attack, to deliver a healthy and beautiful baby boy!

Mazel tov to Shira, to Amichai, and to all the family.

Their courage and positive outlook serve as inspiration for the nation.

There was also cause for celebration last week at the Olympics in Tokyo. Over the years Israel has won three gold medals, and two of them were secured this summer! The latest winner was gymnast Linoy Ashram, 22, the first woman to bring home the gold for Israel when she won in the women’s rhythmic gymnastics individual all-around competition.

This challenging sport, which combines elements of gymnastics, dance and calisthenics, requires the competitor to perform on a floor with each of four apparatuses – a hoop, a ball, a pair of clubs and a ribbon.

Above, you see Ashram with a ball, and in her stunning performance in the video below, she is using a ribbon.  Note that the music in the background is Hava Nagilla.

One other video to share: the playing of Hatikvah and the Israeli flag being raised.  If you watch closely you will see that Ashram is weeping:

At the closing ceremonies on Sunday, she was selected to carry the flag for the Israeli delegation of 90 competing athletes – the largest delegation Israel has ever sent to the Olympics.

Since 2000, Russians have had a lock on the women’s rhythmic gymnastics individual all-around competition at the Olympics. This year, they expected to walk away with the gold again, and did not, shall we say, display a good sporting attitude on losing to Ashram; she came out 0.150 points ahead of Russia’s three-time champion Dina Averina.  The Russian Olympic Committee said it was going to file a complaint with the International Gymnastics Federation and demand a “probe” into the judging process.

Kvetched the president of the Russian Rhythmic Gymnastics Federation, “Enough, they got tired of Russia. And the judges decided to support this Israeli woman.”

What grabbed me when I read her statement about “this Israeli woman” was that it was indicative of a certain attitude. Not surprisingly, I subsequently read that there were anti-Semitic comments about Ashram in social media, from Russian sources.  Unfortunately, even the good news often has its bad edge, it seems.  But what matters is that Ashram has been unflappable about the Russian attacks and says she could not be happier.  That approach is, itself, cause for pride in Israel.

A victory that is very late in coming, but significant nevertheless. Thanks go to Shurat HaDin, the Israel Law Center, which is tireless in its pursuit of justice for victims of terrorism:

“The Italian cruise ship S.S. Achille Lauro was hijacked by three terrorists from the Palestine Liberation Front (PLF) faction of the PLO on October 7, 1985…the seajacking was part of a larger plot to perpetrate a catastrophic attack in Israel…Once in control of the ship, the terrorists targeted the Jewish passengers, severely beating several of them, including retired New Yorkers Sophie Chaser and Anna Schneider. The terrorists shot and killed Leon Klinghoffer, a 69-year-old American confined to a wheelchair, and then threw him overboard. The entire operation was masterminded by Abu Abbas, the PLF commander. Abbas was a member of the Palestine Liberation Organization Executive Committee…”

The Jerusalem District Court has now ruled that the Palestine Liberation Organization must pay nearly NIS one million to the estates of two of the Israeli victims of this 1985 ship hijacking.

Attorney Nitsana Darshan-Leitner, founder and president of Shurat HaDin, leads the fight against terror financing.  It is critically important to continue to battle on every front.

Interestingly, Shurat HaDin has applied with Israel’s Justice Ministry for the right to distribute Ben & Jerry’s ice cream under the name “Judea and Samaria’s Ben & Jerry’s” – arguing that the company forfeited its rights in that area when it applied BDS.

Nitsana, who doesn’t fool around, is just itching for Benny & Jerry’s to take Shurat HaDin to court on this.

A mock-up of new packaging from Shurat HaDin. (Love it!): 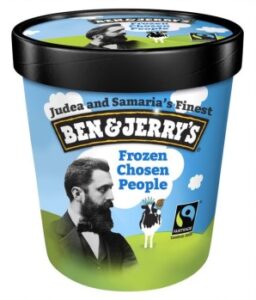 Why do I have the feeling that Unilever is saying, “WHAT have we gotten ourselves into?”

And a word about an Israeli startup called Beewise, which is out to address a serious agricultural problem. About one third of all agricultural products depend on bee pollination, but bees world-wide are dying because of factors such as disease, parasites, pesticides, air pollution and climate change, presenting a serious threat to agriculture.

Beewise seeks to rehabilitate the bee population via an autonomous, solar-powered device called Beehome. It can house up to 40 bee colonies, two million bees, providing upkeep and maintaining their health via AI, computer vision and precision robotics.

Explains Beewise: “…We must never forget that the traditional hives most commonly used in the world today (Langstroth box) were designed by us, humans, about 150 years ago. Most people are so used to them that we mistakenly confuse them with bees’ natural habitat. That is far from being the case. By completely redesigning the beehive we were able to address a lot of the inefficiencies of the commonly used hives and significantly improve bees’ well-being and…longevity. For us, bees come first; our customers come second; and then all the rest.” (Emphasis in the original.)

But it’s not all good news, for sure.  And I do want to touch upon at least one deeply troubling item here:

It is just 20 years since the horrendous terror attack at Sbarro’s a pizza restaurant at the corner of King George and Yafo in downtown Jerusalem. Fifteen people were murdered, including seven children, and two Americans; 130 people were injured.

The attack was perpetrated via the method that was “popular” then: a suicide bomber with explosives strapped to his body detonated himself.

He cannot be prosecuted. But the person who masterminded that attack is still very much alive and actually enjoying the good life.  Ahlam Ahmad al-Tamimi had transported the suicide bomber to Sbarro’s, given him his instructions, and departed the area.

She was subsequently captured and in 2003, was sentenced in an Israeli military tribunal to 16 life terms.  But in 2011, she was released as part of a prisoner exchange when Israel sought the release of Gilad Shalit, held by Hamas.  This, in my opinion, is something that absolutely should not have happened.

A Jordanian national, she was released into Jordan.  There, she gave an interview (translated by MEMRI) indicating she had no remorse: “I do not regret what happened. Absolutely not. This is the path. I dedicated myself to Jihad for the sake of Allah, and Allah granted me success…Do you want me to denounce what I did? That’s out of the question. I would do it again today, and in the same manner.” (https://en.wikipedia.org/wiki/Ahlam_Tamimi)

In Jordan, she has been treated as a celebrity and for some years did a radio show. US calls for her extradition have been denied by the Jordanian government because there is no extradition treaty. But exceptions have occasionally been made and one has the sense that there is reluctance to turn her over because she is a popular figure in Jordan, which tells us a good deal about Jordan.

The only way her extradition might be secured is via political pressure from the US.  The US considers Jordan a close ally, and provides more financial assistance than any other nation. Again, it tells us a good deal about Jordan that, in spite of this, the king thumbs his nose at the request for extradition.

Pressure must be brought to bear on the Biden administration, to leverage pressure on Jordan to achieve that extradition.  At one point President Trump had spoken about withholding funds from Jordan until Tamimi’s release. This never happened, but this is likely the correct approach.

Please, email Biden on this, and, importantly, your senators and congresspersons:

I ask you to also please put the address americansvoteisrael@gmail.com in the BCC line of any correspondence you send to elected officials on this matter.  This is for activists working on this cause who want to track communication.

Arnold Roth and his wife Frimet have labored tirelessly to see justice done in this matter. Their daughter, Malki, was killed in the Sbarro attack at the age of 15.

The Roths founded the Malki Foundation in their daughter’s memory, to help families with disabled kids care for them at home. This tells us who Arnold and Frimet Roth are.

From Israel: “Twisting, This Way and That!!”

From Israel: “Dangers: Within and Without”