Baruch Dayan HaEmet. I begin by noting with sadness the passing of Esther Pollard, here in Jerusalem. She stood by her husband Jonathan through many incredibly tough years. A year ago they were finally permitted by the US government to make aliyah. A couple of weeks ago, Esther contracted Covid; on Monday, weakened by her battle with cancer, she succumbed in Hadassah Hospital.

May the Almighty give Jonathan strength in his time of mourning.

Now as I move to the issue of “settler violence” I urge you to read this carefully, save it, and share it as broadly as you can:

Now we see a new charge: “settler violence” and the failure of the Israeli government to deal with it.

This one is a bit different from the other charges, for the primary charge is not directed at all the Jews of Israel. It is directed at “settlers”: those Israeli Jews who live in areas over the 1967 armistice line (which doesn’t actually exist any longer) in Judea & Samaria. “Settler” – a perfectly honorable word – is being turned into an epithet.

We’re hearing a lot about it these days – from various elected officials and the Israeli media, and from sources outside of Israel, including – wouldn’t you know – from the UN. “Settler violence,” we are being told, is a growing and serious problem.

What I am finding as I research this is:

[] Failure to confirm that alleged attacks really happened as reported

[] Failure to put alleged attacks by “settlers” into context

[] Provocation – deliberate stirring up of a situation

This posting provides an over-view of the situation. Obviously, I cannot examine every instance of a “settler violence” accusation; that would require a book. But I want to begin with one recent accusation that addresses the matter of context.

In late December or early January it made news that students of the Homesh Yeshiva threw stones directly outside or within the perimeter of the neighboring Arab village of Burqa. I am having troubling finding news sources, because they refer to “settlers” and not specifically Homesh students. In one report, windows in a new house were broken. I have seen no documentation of injury to the Arabs of Burqa by the students of Homesh – no concussions or eye injuries, etc.

Now, I am definitely not someone who endorses stone throwing. And I recognize that I would be expected to condemn such acts by the yeshiva students of Homesh, if indeed they committed them. But I feel the need here to consider the background situation. The yeshiva students of Homesh were grieving, having suffered the loss of one of their own, Yehuda Dimentman (below with his wife and son), in an unprovoked drive-by shooting. Grieving and likely enraged.

But there was not a hint of a suggestion that they were planning a retaliatory shooting of a local Arab, or a knifing. They may have thrown stones.

And so what should we be talking about: “settler violence” or how to stop the murderous attacks by Palestinian Arabs?

This comes to 18 attacks against Jews in Judea & Samaria per day!

Compared to 2020, the year 2021 showed a 38% increase in stone-throwing incidents, a 36% increase in Molotov cocktail attacks, and twice as many stabbings.

Over and over, my friends, in my postings I have made a point of noting the praiseworthy behavior of Jews in Judea & Samaria when coping with the murder of one of their own. They don’t seek vengeance, they want to build in the memory of the person who was killed.

The Jews of Judea & Samaria are in the main dedicated to Zionist ideals. They are not perfect. Some small number might lash out in frustration on occasion. But they should be saluted for their courage in the face of terror and their commitment to their ideals, not vilified. But they are being vilified.

This past Friday, JPost Editor Yaakov Katz wrote a column called ‘It is time to combat settler violence.”

At first blush it appeared, relatively speaking, that he was fairly moderate in his charges regarding “settler violence.” For he incorporated the point that it was only a small minority of “settlers” that was violent. But then I looked again.

He voiced distress about the lack of enforcement of law in Judea & Samaria (law concerning Jews, that is). And in this context he cited Deputy Minister Yair Golan (Meretz), who “called the Jews who have been trying to illegally resettle the evacuated settlement of Homesh ‘subhuman,’ after the army said that some of them had vandalized nearby Palestinian property.” (Note again: the charge is vandalizing property, not murder or vicious bodily attack.)

Wrote Katz: “Golan – who later apologized – was wrong in his choice of language…On the substance, though, he was not wrong.”

And that’s when I lost it. You know who Golan is? He sent a public message to the Bedouin in the Negev who were rioting by the thousands, subverting law and insisting on their right to illegal housing. He told them not to worry because he and others in the Knesset were with them.

Katz didn’t mind that Golan endorsed violence on the part of the Bedouin. He didn’t demand that Israel apply “rule of law” in the Negev. Only in Judea & Samaria, where Jews are concerned and there are, says Katz, “violent criminals” in some of the Jewish communities.

David Bedein, director of the Center for Near East Policy Research, then put out an open letter to Yaakov Katz, addressing some of the more pertinent issues in his column. You can see the full letter here:

Bedein posed a number of questions to Katz in order to make the point that matters are not always as they seem. When there is an apparent attack by “Jewish settlers” it is necessary to determine who these alleged “settlers” are and where they have come from:

“Have you noticed that the riots of masked settlers often take place in the presence of security forces, who supply pictures of masked rioters to the media, to foreign diplomats and to NGOs that are funded by the New Israel Fund, always with the caption: ‘masked settlers’.”

“I have used my press credentials…to ask Israel police intelligence why they do not arrest these masked rioters when the police and the IDF witness the act of violence, to which they have no response.

“Have you ever asked the IDF and the GSS to explain why these masked men are not arrested?”

“ISM is a well-organized anarchist group who use clever infiltration such as such as wearing Tzitzit [ritual fringes]…flowing from their shirts to gain entry and access to Jewish communities in Judea and Samaria, while befriending pro-Arab NGOs.

“Have you ever asked anyone in the police or GSS about whether some or all of the masked rioters are indeed members of The ISM or any other anarchist group?”

In the fall of 2019, Rabbis for Human Rights (HRH) went to help Arabs harvest olives outside of the community of Yitzhar in Samaria – as they regularly assist with the Arab olive harvest.

Note: RHR – whose membership is comprised of rabbis, primarily progressive, humanist, and at least one “secular rabbi” – is identified by NGO Monitor as a partner of Ecumenical Accompaniment Programme in Palestine and Israel, which “promotes BDS campaigns and utilizes demonizing rhetoric accusing Israel of ‘apartheid,’ ‘collective punishment,’ and ‘war crimes’.”

On the occasion I recall, although there may be many similar instances, the members of RHR who were there claimed that a group of Jewish settlers charged down from Yitzhar and began attacking them. The Jews, they said, then set fire to the olive grove.

Checking further, I learned from an impeccable source that it was the Arabs who had set the grove on fire in order to implicate the Jewish “settlers.” There are many documented incidents of damage done to Arab property that appeared to have been done by Jews, when in fact it was Arabs who were responsible.

Various members of RHR individually put out information about what had transpired on social media platforms – primarily Facebook. It was obvious that there was no coordination. One said that the entire olive grove had been burned down. A subsequent message observed that they – RHR – would have to return the following week to help complete the harvest. There were messages, as well, about alleged injury to an elderly rabbi that did not hold up either.

The bottom line here is that many believed what the RHR had charged regarding violent Jews. Why not believe rabbis out to be helpful? Only because I asked questions, and monitored the situation, did I find the holes in the story.

I have learned now that it is documented that on occasion there have been Jews – Jews without honor or a shred of integrity – who have confessed to attacking Arabs for a price. Direct provocation: Done to discredit “Jewish settlers.”

There is a cardinal lesson here. View criticism of Israel with a jaundiced eye and ask a good many questions before making judgement or joining accusations.

On the other hand, be active in publicizing and discrediting harmful distortions.

Most often the story is far more complex than what the media will tell you. And in any event the media are very frequently tilted against Israel.

In addition, I think what we sometimes see among basically decent people is a rush to judgement: Hey, I’m a Jew/a supporter of Israel, but I must be ready to criticize where criticism is called for. If settlers are acting violently against innocent Palestinian Arabs, I must take a stand.

Never in modern history has there been an international vendetta against Israel such as what we are seeing now. It defies rational explanation. The UN Human Right Council Commission of Inquiry, directed at proving that Israel does not have legitimacy, is the tip of the iceberg.

In addition to the UN action, we now have Amnesty International getting into the act with a newly- released report: “Israel’s Apartheid Against Palestinians: Cruel System of Domination and Crime Against Humanity.” NGO Monitor, which calls the report anti-Semitic, says Amnesty International distorts international law and promotes BDS.

I have learned that the EU (an enemy of Israel) has paid the anti-Israel NGO Breaking the Silence a very substantial sum to raise public awareness of “settler violence.”

NGO Monitor reports that Breaking the Silence was “active in promoting ‘war crimes’ charges against Israel. These charges were based on anonymous and unverifiable hearsay ‘testimonies’.”

The EU had previously gone on record as assessing Breaking the Silence as not reliable. But it but was prepared to call upon them to do this job – presumably because the EU thought they could do it well.

So it’s not necessarily the case that there is “more settler violence,” as many sources have concluded, but rather that the issue is being more vigorously promoted in public awareness. It is just one more weapon.

What we do see more of – as I have documented above – is violence directed AGAINST settlers. Voices must be raised against this.

For a different view of Israel, see this, which comes to us from @emilyschrader: 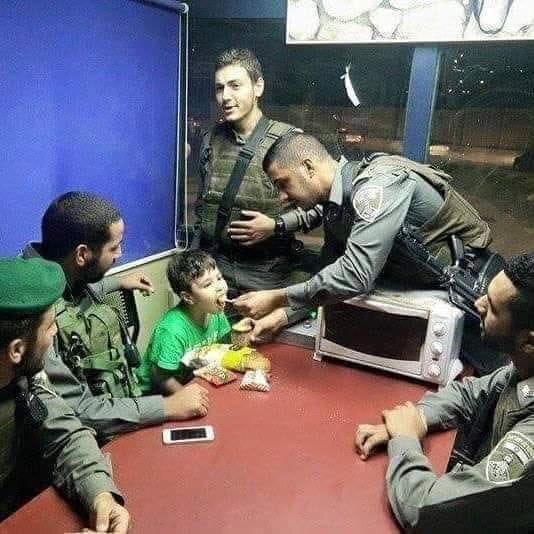 “A 3-year-old Palestinian [Arab] couldn’t find his parents, so he decided to go to the checkpoint and ask the Israeli soldiers for help. The soldiers went out and searched for the boy’s parents, and in the meantime they fed and took care of him.”

From Israel: “The Thread Has Snapped, and Now?”

From Israel: “There Is No Other Way!!”