I want to begin by wishing blessings for the New Year to all my readers who observe Rosh Hashana: The blessings of inner peace, spiritual growth, good health, love and companionship, and secure livelihood.

Please, after you pray for yourselves, pray for the Jewish People and the State of Israel with special intensity.  May the Almighty give us strength for the hard times, the wisdom to make the right decisions, and, ultimately, security and peace.  May He hold us in His hands.

I put aside other news I had wanted to feature, to report on this first:

Eyal, Gilad and Naftali are gone.  We cannot bring them back. But now justice has been done:

The two men from the Hevron area – Marwan Kawasmeh and Amer Abu Eisha – who had abducted and then murdered them were located early this morning.  In the course of an attempt to arrest them, a gun fight ensued, and they were killed.

It was the Shin Bet that located their hideout.  Hamas suspects who were believed to be sheltering them had been arrested and questioned.  The operation itself was carried out by the IDF and, Yamam, a special unit of the Border Police.

Other members of the Kawasmeh family have been arrested for involvement in the kidnapping/murder.  The mastermind, Mahmoud Kawasmeh, had been released in the Shalit prisoner exchange (a very clear reason to NEVER release a terrorist in an exchange again).  Operating from Gaza, he proceeded with Hamas instructions and cash; he is still at large.

With a few exceptions, even if it takes time, in the end we get the perpetrators of heinous crimes against innocent Israelis.  Here, it has brought a sense of relief.  That this has happened immediately before the new year is being taken in some quarters as a sign, please God, that we may see better times in the new year.

Paula Stern, writing as “a soldier’s mother,” commented on this. She says it so beautifully that I wanted to share (emphasis added):

”There is no more we can do for the three boys, other than to hold on to the love and the unity that in their deaths was born. But in their memory, our government can pledge that no one will ever think Jewish blood is cheap again. We promised we would hunt them down…and we did. For this ending, there is a new beginning – a new year.

”May the memory of Gilad, Eyal and Naftali always be blessed; may their families know no more sorrow, and more, may they know our gratitude. In their grace, with their faith, they led us through what was, without question, the worst moments of their lives. May they go from strength to strength with our love.”

Now Israel must – absolutely must! – respond with a similar degree of determination in dealing with another sort of problem being generated by Palestinian Arabs.  This is a critical situation and one that I am eager to bring to your attention:

Since the summer we are seeing increased Arab violence and vandalism in the eastern parts of Jerusalem.

In the main, the perpetrators are Arabs with Jerusalem residency cards, not citizens of Israel. (Note: these Arabs have the opportunity to acquire citizenship, but prefer the residency papers because they provide many of the same perks – health care, etc. – but are more “politically correct” from their perspective than Israeli citizenship.)

There have always been two hotspots with regard to this situation.

One – at the very heart of what this is all about – is Har Habayit, the Temple Mount.  You’ve heard it from me, and I will come back to it again and again:  Jews are not allowed to pray on the Mount even though it is the holiest site in Judaism, because this causes Arabs who are up there to riot.  Perish the thought that they should riot.  But what is happening now is that Jews are being increasingly harassed on the Mount by Arabs.

I shared this video in the spring, showing the obscene harassment of children by Arabs on the Mount:

There have been many other incidents since then.

The other hotspot is the cemetery on Har HaZeitim, the Mount of Olives. This is the oldest and largest Jewish cemetery in the world.  An integral part of our ancient heritage in the land, with 150,000 graves, it is still in use. 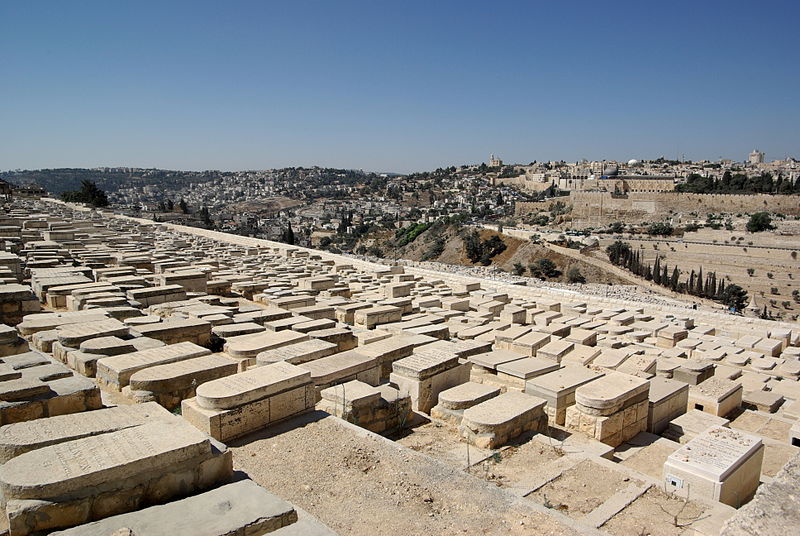 Here, we are dealing with two problems.  One is the desecration of graves and the other is threats upon those attending funerals on the Mount or visiting graves:  Arabs throw “stones” that are sometimes chunks of concrete or almost boulders – creating a serious risk.

There has been much done in recent years to improve the situation in the cemetery but of late the attacks have grown worse.  Just months ago Tova Richler, an American, missed her own father’s funeral on Har HaZeitim because she was so traumatized by an attack upon her as she was on the road adjacent to the cemetery that she could not continue.

And then there’s more: Rioting and rock-throwing, Molotov cocktails, attacks and vandalism in and near largely Arab neighborhoods in eastern Jerusalem.

In Wadi Joz, an Israeli family was besieged by Arabs throwing rocks at their van when they stopped at a traffic light; three members of the family were hurt.

In Shufat, enormous vandalism has taken place.  The Light Rail goes through Shufat and I’m reading – depending on the source – that some 30% to 50% of the Rail cars are out of commission because of this vandalism. This is mind-boggling.

Last week, a bus carrying Jewish children from the Ma’aleh HaZeitim neighborhood (which is on the Mount of Olives and adjacent to Arab villages) was attacked by masked Arabs throwing stones.

I could continue with further examples, but it is not necessary.  Everyone reading this should be thoroughly outraged by now.

The question is what will be done about this.  For it is not only (only??) a matter of risk to Jews in Jerusalem, there is the over-riding issue of Israeli sovereignty in all of Jerusalem.

What has been done to date is – on the very face of it – sorely insufficient.  Some hundreds of Arabs have been arrested. But I have it on very good authority that there is a revolving door and many are released without being prosecuted.

We cannot afford to operate out of fear, and yet this is what seems to be happening: Fear that if we send in the police in sufficient numbers to control the rock-throwers with sufficient force, somehow something will go wrong and some Arab will be severely injured or killed. Then there will be more rioting. Or the world will carry on about how we “treat” the Arabs.  The US or the EU will demand an “inquiry,” and reprimand us.

“I want to qualify this decisively: a heavy and uncompromising hand should be applied against all those who employ violence of any kind…”

Don’t tell us, show us.  It is time for action at a municipal and a national level on this.  Without fear of repercussions, with firm belief in our rights in our land.

I will be returning to this.

Please see a piece by David Weinberg on this issue:

And then one by Nadav Shragai:

Both writers allude to what is happening as an intifada.  But each has a different perspective.

Shragai says that this is not spontaneous, but organized (emphasis added):

“In each of the villages [Arab neighborhoods] of east Jerusalem, there is at least one dominant player on the ground. In A-Tor, it’s Fatah. In Issawiya‎, it’s the Democratic Front for the Liberation of Palestine and the Popular Front for the Liberation of Palestine. In Jabal Mukaber, it’s Hamas. In the Shuafat refugee camp, both Fatah and Hamas are in charge. Somebody — and it is still unclear who — is subsidizing the thousands of packs of fireworks that are being launched at a dizzying pace by Palestinians in Jerusalem.

Each bundle of fireworks, which costs hundreds of shekels, isn’t being paid for by the rioters themselves. The rioters’ legal fees are covered by the Palestinian Authority. Hamas websites are calling this phenomenon by its real name: “the third intifada.” There are almost no lone wolves. The countless disturbances are being carried out in groups.”

All the more reason, then, for a strong hand.  This truly is a battle for Jerusalem.

“A critical element for regaining control of the entire city has to be enforcement of civic law. Somehow, in the Arab neighborhoods of the city, building codes and noise pollution bylaws don’t apply. The Arab residents know how to take national insurance payments from the government of Israel and to enjoy excellent health care privileges in the city’s clinics and hospitals, but they know nothing of municipal taxes, building permits, or yielding to stop signs.

“This has to change. Part of regaining security control of the city is disciplining the Arab public to be law-abiding residents in all spheres.

“The bottom line is that to hold on to a united Jerusalem, Israel must act forcefully to restore its full and active jurisdiction in all parts of the holy city. It must wield a big baton against Arab insurgents that are threatening the stability of the city. And there is no better time to act than now.”