From Israel: Seeking the Good Stuff

There is lots of “good stuff” going on here. It’s just that sometimes the “bad stuff”—when it is of considerable import and must be shared – takes precedence.

Prime Minister Narendra Modi of India arrived here in Israel on yesterday afternoon for a three-day stay.  I think Modi’s embrace of Prime Minister Netanyahu, who welcomed him at the airport, set the tone for the visit. It has been referred to as groundbreaking. 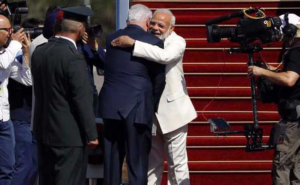 The visit marks history because it is the first time a sitting Indian prime minister has come here.  And what makes it even more unusual, if not remarkable, is that Modi chose not to do what most heads of state do when they are trying to appear “balanced”: that is, visit Ramallah.

For his part, Netanyahu cleared his calendar so that he could accompany the Indian prime minister on most of his stops around the country.

Also extraordinary: Modi and Netanyahu collaborated on an op-ed that appeared in the Times of India on the day of Modi’s arrival.  It says, in part (emphasis added):

“The natural partnership between India and Israel, formally elevated 25 years ago to full diplomatic relations, has grown stronger from year to year. The deep connection between our peoples reflects our many similarities in spirit, if not in size…

“India and Israel are walking hand in hand into the future as partners. India is a growing economic powerhouse with a large market and talent pool. Israel is a world leader in high technology and innovation. The combination of India’s and Israel’s human resources and ingenuity will provide more effective and more affordable solutions for us in diverse fields that are priorities for both our governments: agriculture, water, health, environment, education and security.

“This unique blend of complementary capabilities has forged strong ties between India and Israel, particularly in the field of technology…These ties go beyond technological exchange and reflect a long-term developmental partnership.” 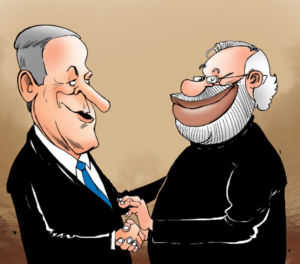 A key focus of Modi’s visit is securing Israeli expertise with regard to agriculture and water. A memorandum of understand has been signed in this regard.  All in all, seven bilateral agreements will have been signed by the time he leaves.

Modi brought with him a delegation of 100 officials and representatives of major Indian corporations; a project is in the works to encourage hi-tech cooperation.

“This is a new kind of diplomacy. We’ve identified the areas in which each country has a relative advantage and can help the other, and now cooperation is the name of the game.”

The USS George H.W. Bush, the largest warship/aircraft carrier in the world, docked outside of Haifa port at the end of last week.  (It was too big to enter the port.)  Israel provided security.

This was the first time an aircraft carrier visited Israel in 17 years. Admiral Michelle J. Howard, commander of the US Naval Forces Europe-Africa, stated that the visit marked “a special moment” between Israel and the United States. 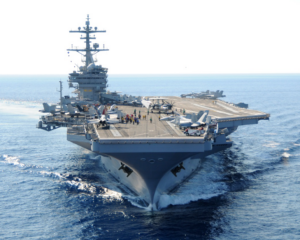 There was proper ceremony surrounding its presence in Israel’s waters, with Prime Minister Netanyahu – the first sitting head of state to visit the carrier – boarding on Monday. 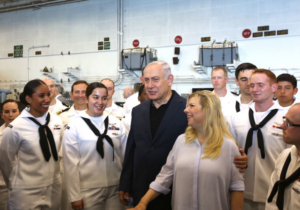 “There is a tremendous network of shared intelligence [between the US and Israel]. We are very tightly linked with our colleagues and partners and allies from the IDF and have been for very many years.” (Emphasis added)

The crew of over 5,000 was granted leave to tour and to celebrate the Fourth of July in Israel.

The warship, which – incredibly! – carries some 75 aircraft, has been a key player in the US battle against ISIS.  Its aircraft have carried out more than 1,600 sorties over Syria and Iraq, all of which have required a great deal of that intelligence sharing with Israel.  It departed today.

UNESCO is at it again.  It seems they cannot go for an extended period without another resolution hostile to Israel.

On Tuesday, UNESCO’s World Heritage Committee, which is meeting in Krakow, Poland, voted that:

“legislative and administrative measures and actions taken by Israel, the occupying power, which have altered or purport to alter the character and status of the Holy City of Jerusalem, and in particular, the ‘basic law’ on Jerusalem, are null and void and must be rescinded forthwith.”

This passed with a minority vote: of the 21 members of the Committee, 10 voted for the resolution, eight abstained and three – Burkina Faso, the Philippines and Jamaica – opposed it.

The resolution lacks any legal impact and will be ignored by Israel; our foreign ministry called it “pathetic.”

But they’re not done yet.  The big issue, still to be voted upon, has to do with the Machpela – the Cave of the Patriarchs in Hevron.  I will come back to this.

My friends, my last posting about the Kotel dispute was extensive and heartfelt.  And I thought I was done.  In fact, when some readers sent me additional material, I indicated that I wouldn’t be revisiting this – I’d be moving on to other issues.

And yet I feel that I must revisit it.  For the situation continues to rub, as articles are still appearing that lament the disservice to liberal Jews, who allegedly will not have an egalitarian section at the Kotel.

But, as I very clearly pointed out last time, they do have such a section now.

In fact, there is something very beautiful about that section, because it contains an elevated platform in an area where great stones lie strewn about.  Those stones are well over 2,000 years old, tossed down by the Romans during the destruction of the Temple. 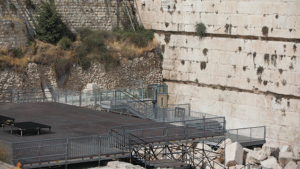 When I first saw that, I thought it particularly moving.  But you have to care about the destruction of the Temple to be moved.

So what is going on?  Those voicing discontent are likely lamenting the fact that the entrance to that egalitarian section will not – at least for the foreseeable future – be joined to the entrance to the traditional section, as had been promised.  This is, as I had intimated, a political power struggle.  Moving the location of the entrance is not about creating a more spiritual or uplifting environment for prayer.

Please be aware of this, and avoid being taken in by distorted arguments.

Were the entrance to the egalitarian section joined to the traditional entrance, there is no doubt in my mind that there are women who would enter already garbed in tallit and tfillin.  Would they be sensitive to the feelings of those, traditional in outlook (not necessarily ultra-Orthodox at all), who might be genuinely distressed by what they were seeing?

That’s another one of my rhetorical questions.  If they had sensitivity to the traditionally observant, they would don their tallit and tfillin at the prayer site.

I invoke this hypothetical situation because it has been my observation over time that those fighting for the progressive position tend to be deliberately “in your face.”  On occasion they have shown themselves prepared to cause a stir at the Kotel, if it brought them publicity.

For me, all of this is relevant.

I end by citing briefly from a piece in today’s JPost by Rabbis Pesach Lerner and Yaakov Menken:

“…Following the reunification of Jerusalem in 1967, traditional Jews immediately flocked to the holy site and requested suitable facilities for prayer.  Today thousand (and often tens of thousands) stream to the site daily, at all time in all seasons, pouring out their hearts at the site they regard as the holiest place Jews may go today….

“There is no similar interest in a site for mixed prayer.  The first reason for this is theological…Within recent years, Reform leaders have declared that the Temple Mount is irrelevant save for its ‘historic significance’ and explicitly disavowed any interest in restoration of Jewish worship at the site….

“The truth is, no one uses this [the egalitarian] site except on an occasional basis.  Neither American liberal movement has even once filled the site to capacity, yet they demand a new, larger facility as if there were a real need.”

This whole issue, with all of the righteous indignation being expressed, wears thin.  It is a source of sadness.  Not only here, but in Heaven.