Yesterday, on its FaceBook page, the IDF put up the following message:

“We recommend that no Hamas operatives, whether low level or senior leaders, show their faces above ground in the days ahead.”

A great message.  I am reading that Hamas and assorted other terrorist leaders are not to be seen.

So we are waging the battle that is understood in all reasonable quarters to be necessary.

“We are in the midst of an attack that will continue and grow. There is no hourglass. We received the green light from the Prime Minister and the Minster of Defense.  If I were a senior Hamas activist–I would look for a place to hide.

“…All options that allow us to cause serious damage to Hamas and the other terrorist organizations are on the table.”

Well put, and a warning about potential “collateral damage.”  This is always the dilemma for the IDF, because the terrorists hide their weapons and often do the launching in the midst of civilian areas.  They figure they will win one way or the other: either we won’t hit or we hit and risk international condemnation.

The IDF is doing everything possible to minimize those civilian casualties.  Today leaflets were dispersed in several areas of Gaza, warning residents to stay away from the operatives and facilities of Hamas and other terror organizations, as they may pose a threat to their safety.  Additionally, over 20,000 phone calls have been made to residents to warn them to vacate areas that are likely to be hit soon.

Now I ask: What other nation in the world would do this?  Please, do Israel a favor and publicize this fact, via letters to the editor, talk shows, discussions with friends, etc.

~~~~~~~~~~
It would be impossible to exaggerate the incredible intelligence required, and the level of cooperation necessary between the Shin Bet and the IDF, in order to pull off the two-pronged attack that took place yesterday.  It represents a stunning beginning to this battle.

Maj. Gen. (res.) Eitan Ben-Eliyahu, former commander of the Air Force, estimated on the news last night that the Air Force probably had something like 20 seconds for successfully executing the strike against Jaabari.

Israel also successfully located the sites of the long-range Fajr missiles, capable of hitting Tel Aviv, and took most of those out as well.

It may take a while for us to act, but when we do… watch out!  This, this is the IDF the world needs to see.

This does not mean that it will not be difficult for Israel during the course of Operation Pillar of Defense.  Since that operation began late yesterday, over 130 rockets have been launched at Israel — and by the time you read this, it will be more.  A barrage of rockets was aimed at Be’ersheva; as well as at Ashkelon; Yavne; Ofakim — where a school building was hit; Ashdod — where a home was hit; Eshkol — where three soldiers were injured by mortar shells; Sderot, etc. etc.  And this will continue.

What is more, by 5:00 PM a rocket had landed in Rishon Letzion, which is farther north, below Tel Aviv.  And then the sirens went off in Tel Aviv and two rockets landed in an open field.

The painful news is that there was a direct hit in Kiryat Malachi, which led to deaths of three people, serious injury to two additional adults, moderate injury to one boy, and light injury to two babies (one of whom is pictured here). 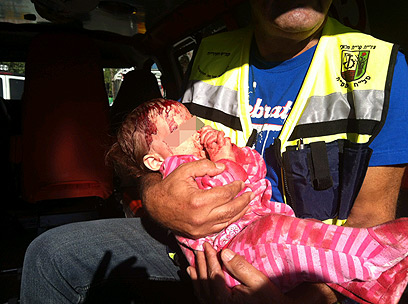 One of the dead is Mira Sharef, who was a Chabad Lubavitch emissary in India.  She and her family had come to Israel to participate in a memorial for the victims of the terror attack on the Chabad House in Mumbai four years ago.

Sharef, was pregnant; her husband and children were injured.

The IDF reserves are being mobilized, although it is not yet clear what will happen with regard to a ground operation.  Certain units are being moved south.  And we are continuing to hit multiple sites in Gaza from the air — with some 200 plus sites already hit.

In a press conference last night, Defense Minister Barak laid out four goals for this operation:

1. Strengthening our deterrence
2. To inflict serious damage on the rocket launching network
3. To deliver a painful blow for Hamas and the other terrorist organizations
4. To minimize damage to our home front

“There is no ‘quick-fix’ solution,” he said. “…But we will achieve these aforementioned goals throughout the course of this operation.”

The clear delineation of goals is considered to be of great importance. For otherwise, the IDF cannot determine when it’s time to stop because the goals have been achieved, and when it is necessary to continue.

Please note, taking down of Hamas entirely is not one of the goals.  Actually, there may be solid reason not to eliminate Hamas right now: There are more radical Islamists groups such as al-Qaeda operating in Gaza today.  Creating chaos or a vacuum that allows such groups to come to the fore would be no gain.

At the call of Palestinian Arabs, Egyptians and others, the Security Council met late last night to discuss what is going on in Gaza.  It disbanded with no conclusion.

Israel’s ambassador to the UN, Ron Prosor, reminded those assembled that he had registered concerns multiple times about the rockets being fired into Israel from Gaza but there was never a response.

Rest assured, there will be international diplomatic efforts afoot in no time to “restore quiet” to the region — which essentially means demanding that Israel call a halt.

There has been reasonably wide scale support of Israel’s “right to defend itself.”  But it often comes with a proviso about not escalating matters unduly or causing unnecessary civilian casualties, or whatever.  In other words:

Yes, Israel, you have a right to defend yourself, but there should be considerable constraints levied with regard to how you do this.  Preferably, you shouldn’t kill anyone.

Yes, yes, Hamas started it with its rockets. But the region doesn’t really heat up until Israel responds.  Things would be quieter if Israel restrained itself.

Canada issued a statement of support for Israel. And the US also voiced support. This came from Obama, Clinton, and Rice at the UN.

But Clinton was one of those who found it necessary to add a proviso: “We support Israel’s right to defend itself, and we encourage Israel to continue to take every effort to avoid civilian casualties.”

The EU’s Catherine Ashton made a totally ludicrous statement: “There is no place for violence in the Middle East. It is only through resumed negotiations that the legitimate aspirations of both Palestinians and Israelis will be met, through a two-state solution.”

Would someone please tell her that Israel is (theoretically, at least) supposed to be negotiating with the PA in Judea and Samaria about a “two state solution” and that this has nothing to do with Gaza or with Hamas, a terrorist entity with whom Israel will not negotiate and which is in favor of destroying Israel, not establishing a state along side the Jewish state.

How pathetic can it get?

On Monday, Maj. Gen. (res.) Yaakov Amidror, Israeli National Security Advisor, was in Washington meeting with his American counterpart. Official word then had it that they were discussing the situations in Gaza and Syria.  Well, yes, but it retrospect it becomes clear that Amidror was sent to give heads up to the Obama administration on intended Israeli action in Gaza.  What we began last night was no surprise at the White House.

Earlier this week Netanyahu addressed ambassadors in Israel from foreign nations, making Israel’s case for self-defense. Today he called Obama to express appreciation for his support. Talking points are going out to Israel’s emissaries in various parts of the world, providing background information on what Israel has dealt with and what her rights are.

Egypt has recalled its ambassador to Israel for consultations.

Sec. of State Clinton, who has been on the road, was at the Egyptian presidential palace, and apparently an appeal was made to her for the US to intervene.  (I see nothing about a response on this from her.) President Morsi is doing some sort of balancing act — siding with Palestinian Arabs but trying to appear balanced so he can negotiate a cease fire.  He seems not to have lashed out verbally at Israel as he might have been expected to do.

Shabbat comes in very early now. Not sure there will be time to post again until after Shabbat.