Jerusalem.  And today we are celebrating Yom Yerushalayim — Jerusalem Day — the anniversary of the liberation by Israeli troops of eastern (historic Jewish) Jerusalem, in 1967.

May we never forget the blessing that has been restored to us.  This is a time for prayers of gratitude for the gift of this city, which truly is the soul of the Jewish people.

The Jerusalem Day parade leads people through the streets of the city and into the Old City for dancing with flags at the Kotel:

In celebration of the unification of Jerusalem:

On the 28th of Iyar, the third day of the Six Day War, when Lt. Gen. Motta Gur. IDF Chief of Staff — and the paratroopers he led in the capture of the Old City — reached the Temple Mount, he sent out a message: 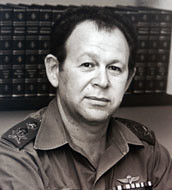 You can hear an historic recording of this event, which includes prayers by Rabbi Shlomo Goren, IDF Chief Rabbi — including prayers for those soldiers who fell in taking the city and a Shehechayanu, prayer of thanksgiving for reaching that day — and shofar blasts. A translated transcript is provided:

Today my prayer is that every Jew should take to heart the meaning of “Har Habayit b’yadenu! “

In the 3,000 years since King David first made Jerusalem his capital, the only time it was divided was during the 19 years that Jordan controlled eastern Jerusalem following the War of Independence.

When Israel liberated that part of the city, Jerusalem was reunited — never, ever to be divided again.

The myth is that “east” Jerusalem is “Arab.”  But this only appeared to be the case because Jordan rendered it Judenrein — not only banishing all Jews, but destroying synagogues and desecrating cemeteries.  The reality is that the very heart of ancient Jewish heritage is in the eastern part of the city.

In fact, the notion that the Palestinian Arabs have a legitimate claim to any part of Jerusalem is equally nonsense.  And let it be clearly understood:  They say they want the eastern part of the city for their capital.  But a serious analysis of statements made by the Palestinian Authority makes it clear that they intend to have all of the city.

We made a grievous error, in turning over the daily administration of the Temple Mount to the Muslim Wakf after we had liberated it. Let there be no more mistakes.

To surrender the very heart of Jewish heritage would be to seriously weaken our national resolve, and to rob us of our deepest purpose. And don’t imagine the Arabs are not aware of this.

Under no circumstances may Jerusalem be divided.

Any so-called Jewish leader or thinker or writer, whether here in Israel or outside, who proposes such a division — imagining it to be somehow necessary either in the interests of “peace” or to satisfy international demands — does a serious disservice to Am Yisrael and the State of Israel.  Such a move would serve only to weaken the Jewish people and to subvert the cause of true peace.

Almost immediately after the city was reunited, a law was passed for the protection of holy places; it reads:

It must be noted that only under Israeli sovereignty will Christian holy places in Jerusalem be guarded.

In July 1980, the Knesset passed the Jerusalem Law, declaring, “Jerusalem, complete and united, is the capital of Israel.”  Eastern Jerusalem is indivisibly part of the capital.

If you have never visited Jerusalem, I urge you to do so.  There is no way to truly value her in your heart without knowing her. When you come, be sure to take a tour of the ancient Jewish sites in eastern Jerusalem.

Of course, the Kotel, and the tunnel adjacent, and the nearby archeological gardens. And go up on the Mount — an important thing to do — with a guide.

Not to be missed, as well, is Ir David — the City of David, outside the city walls. This is the original ancient city, and archeologists regularly uncover new evidence of life there:

But it doesn’t end with these sites. A guide can show you old Jewish neighborhoods, and much more.

If I forget thee, O Jerusalem, let my right hand lose its cunning; let my tongue cleave to the roof of my mouth, if I do not set Jerusalem above my greatest joy.

Celebrations were held last night at the Mercaz Harav Kook Yeshiva in Jerusalem.  One of those who spoke was Defense Minister Moshe Ya’alon, who said:

“We build Jerusalem physically and spiritually. It is the duty of our generation to protect Jerusalem, keep it, develop it and build it. One does not divide one’s soul.” (Emphasis added)

“In recent days we hear about initiatives from the Saudis and from America. Some say openly that they are in favor of splitting Jerusalem. I have an argument with them, and I will never give in when it comes to this argument! But there are also these ‘invisible divisors’ – those who say they are against the division of Jerusalem, but they are in favor of a Palestinian state. These ‘invisible divisors’ are against the splitting of Jerusalem, but they freeze construction in our capital city.

“These invisible divisors do not tell us that they will cause us to give up the Temple Mount and the Old City – which are the heart of the Jewish people – and a heart is indivisible. And I ask all these invisible divisors: Excuse me, but where exactly will be the capital of the Palestinian state be? In Jericho? In Bethlehem? In Berlin?

How I wish that on this day, there would be nothing to fill this post but rejoicing about Jerusalem.  But wishing does not make it so.

I mention here matters of concern, to which I will return for further discussion.  The very first was alluded to by Bennett, above, when he spoke about “‘invisible divisors’ [who] freeze construction in our capital city.”

It has come from a multiplicity of sources that our prime minister is instituting some sort of building freeze past the Green Line. None of this is confirmed in its details, but the fact that something is going on seems very likely — and is deeply disconcerting, indeed, infuriating, if so.

Part of the problem in verifying this information is that we’re being told that Netanyahu is giving instructions not to put out tenders for construction (invitations for contractors to bid on jobs). This means that construction already begun will continue: there will not be a freeze on this.  Not putting out tenders would mean that in the future there would not be any new construction contracted.

Today Army Radio reported that Netanyahu had instructed House Minister Uri Ariel (Habayit Hayehudi) regarding the tenders for construction projects in certain Judea and Samaria communities.  When asked about this, Ariel is reported to have responded that he does not talk about private discussions between himself and the prime minister.  This is hardly a denial. I consider Ariel one of the good guys, and I ask, what is going on?

Deputy Defense Minister Danny Danon was subsequently quoted by Army Radio as saying that he was unaware of any silent freeze on housing:

“The Prime Minister clearly said that he is willing to negotiate, but without preconditions, and a silent freeze is a precondition.”

Yea, yea. But what the prime minister says and what he does are not always the same thing, are they?

Then PLO chief negotiator Saeb Erekat told Maan, the Palestinian Arab news agency, that the PLO had not been informed of any change in “Israel’s colonial plans.”

But Justice Minister Livni is scheduled to meet with Secretary of State Kerry in Rome today.

The situation to our north is also deeply worrisome:

Three shells from Syria have hit in the Golan in the course of 24 hours.  It is believed that these were strays from the on-going civil war and were not deliberately aimed at Israel.  But Minister of Defense Ya’alon has made it clear, once again, that the IDF has a policy of immediately responding to such shelling whenever the source can be identified.

Israel, he said, is not “interfering in the Syrian civil war, but we’ve warned what our interests are, and we have called it ‘red lines,’ whether it’s transferring quality weapons to a terrorist organization or violating our sovereignty along the border.

“…We will act to protect the security of Israel,” he warned, and any Syrian cross-fire will be answered.  Forces in the north are under orders to return fire without seeking approval.  “Should they identify the source of fire, they will destroy it.”

He continues to make noise about the attacks on Iranian weaponry, without taking direct action — that is not the problem.  Rather, Assad is considering permitting Palestinian Arabs in Syria to attack in the Golan.  Khalid Abd al-Majid, secretary-general of the Palestinian Popular Struggle Front, has said that his faction will be meeting with Syrian authorities about this.

This might set a precedent for allowing other radical groups — stronger or better armed than the Palestinian Front — to enter the Israeli Golan.  Assad has scrupulously guarded against this possibility until now. But should his policy change, the IDF would be immediately and necessarily more involved.

Peacekeepers from a Philippine battalion of the U.N. Disengagement Observer Force, were seized near al Jamlah, by Yarmouk Martyrs Brigade, part of the Free Syrian Army — clearly not from the Army’s secular arm.

The US and Russia are now said to be advancing an international conference to address the situation in Syria.  I’m sure the speeches at a conference will have a huge effect.

It is good that Prime Minister Netanyahu went to China, primarily, as I read it, to forge an enhanced trade relationship. But…

While he was there, so was the PA’s Abbas.  And the Chinese greeted him with a “four point peace plan” based on the ’67 lines, and the capital in eastern Jerusalem.  So what else is new?

A Turkish negotiating contingent was just here to finalize arrangements for compensation that Israel will provide with regard to the Mavi Marmari incident.  Reports are that it went well and that — surprise! — after this is achieved there may be an exchange of ambassadors.

The diplomatic/security situation requires a closer relationship between Israel and Turkey. But it remains pro forma for Turkish diplomats to attack Israel.  Erdogan — participating in a very large club –just issued criticism of Israel’s alleged attack on Iranian weapons in Syria.  Such hypocrisy, when Iranian weapons in Syria make him very uncomfortable.

Steven Hawking, world renown British theoretical physicist, has just demonstrated just how stupid someone exceeding brilliant can be:  According to the Guardian today, he has decided not to attend a conference to be hosted by President Shimon Peres here in Jerusalem, as a protest of the way Israel treats the Palestinians.  He was to headline the conference, scheduled for next month, but pulled out on the unanimous advice of his British academic associates.

I would venture to say he knows next to nothing about the political/security realities here, and I point my finger at the British academic community, whose position comes as no surprise.  The Guardian says Hawkings has been bombarded with an intense campaign by backers of the boycott against Israel.  Regrettably, he serves as their unwitting tool.