When last I wrote two days ago, I expected Lieberman to close on a coalition agreement with Likud within hours.  Instead it has taken days.  But as of this morning at 11 AM, the agreement was signed and it was a done deal. 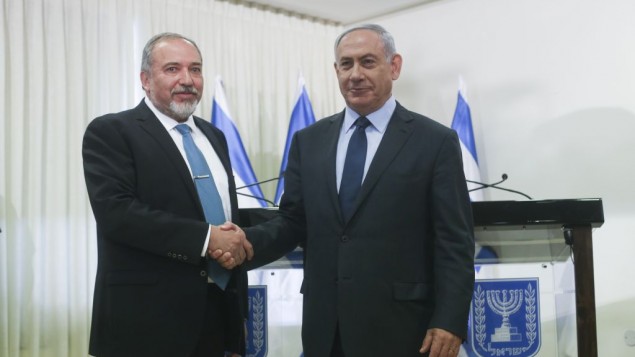 The holdup was caused by Lieberman’s demand that there be increased pension benefits for Russian retirees.  The concern was primarily for those who came to Israel from Russia already past working age (so that they did not have the opportunity to accrue Israeli pensions of substance) but without Russian pensions; as the Israeli pensions they do receive are inadequate, they remain below the poverty line. Most seniors below the poverty line, are, I believe, of Russian origins. The resolution came via an understanding that pensions would be increased across the board – to the tune of at least $360 million – and not just for Russians, which would be inequitable.

Apparently Lieberman, anxious to end the negotiations and get on with it, was flexible in the end.  This was after typical negotiation hardball of the other day, with him declaring talks were at a standstill.

As part of the agreement, MK Sofa Landver of Yisrael Beitenu will become immigrant absorption minister, a position she held from 2009 to 2015.

Moshe Kahlon (Kulanu, pictured) was involved in the negotiations in his role as Minister of Finance, while Yariv Levin served as Likud negotiator.

Now we must pray that Lieberman remains true to the tough right wing stance he has been embracing.

He will not be sworn in as Defense Minister until early next week because the Knesset must first approve his appointment and the Knesset will not be in session on Thursday because it is Lag B’Omer.

Hopefully there will not be a further hold-up, as head of Bayit Yehudi Naftali Bennett had threatened to withhold approval until his own demand was met.

He has been seeking a military secretary whose responsibility would be to keep the various members of the Security Cabinet well informed in critical security situations and facilitate visits to military zones.  He has protested that the Security Cabinet has not been sufficiently involved in major decisions, and I believe he is quite correct in terms of how matters have transpired, especially during the Gaza War of 2014.  (We’re going to be hearing more about this.)

What is not clear is that his proposal is necessary as a corrective – other avenues may be in place, if they are utilized properly and there is awareness of the problem.  It seems to me that a good part of resolving this is a genuine commitment on the part of the prime minister and defense minister to bring in the Cabinet on security decisions.

Today, I am seeing no further mention of this issue.

As the situation requires this, I have been focusing almost exclusively of late on internal Israeli political matters.  And we are likely not yet done.

We are all familiar with the saying that is reported apocryphally to be a Chinese curse: “May you live in interesting times.”  Indeed we do.  Never boring here.

But I do want to turn to other issues, as well here – starting with a couple of good news items.

Unit 9900 – an extraordinary elite IDF intelligence unit – is composed of high functioning adults with autism, who serve on a volunteer basis.

“…they must have rare powers of concentration, along with strong spatial intelligence and visual perception, to decipher what they see. Their interpretations of the images help the IDF plan combat missions, sometimes changing strategy based on newly deciphered images.

“Research has shown that the visual perception of people on the autism spectrum is often different…than those not on the spectrum…autistic individuals can excel at approaching complex visual images objectively,’ focusing only on the ‘raw data,’ without preconceived notions of how things are supposed to be.”

At the very same time that this service bolsters Israel’s security, it provides an invaluable sense of self-worth to those who participate.

According to a Ministry of Absorption document that will facilitate the process, it is expected that by the end of this year hundreds of people from the Bnei Menashe community in India will be brought to Israel, where they will undergo conversion to Judaism and receive Israeli identity cards.  This process will be facilitated by the organization Shavei Yisrael, founded and headed by Michael Freund; it will over-see the community’s acclimatization, including conversion and Hebrew studies, and assist in their in absorption into local communities.

The Bnei Menashe do not qualify for aliyah under the Law of Return and are not recognized as formally Jewish according to Jewish Law, however, they “say their oral history of 2,700 years describes their escape from slavery in Assyria to Media/Persia. From there they moved to what is now Afghanistan and then to Hindu Kush, Tibet and then, in around 240 BCE, to Kaifeng – eventually settling in the Himalayas, where they tried to preserve their heritage. They practice many Jewish rituals.”

While Freund was working in the prime ministers office as (1996-97) he “received a letter from the Bnei Menashe, who told him they were descendants of the tribe of Menashe, one of the Ten Lost Tribes of Israel, and appealed to him to help them return to their ‘Promised Land.’”

There are already 2,000 members of the community here; they have been arriving sporadically since 2006, after some years of controversy regarding their origins. 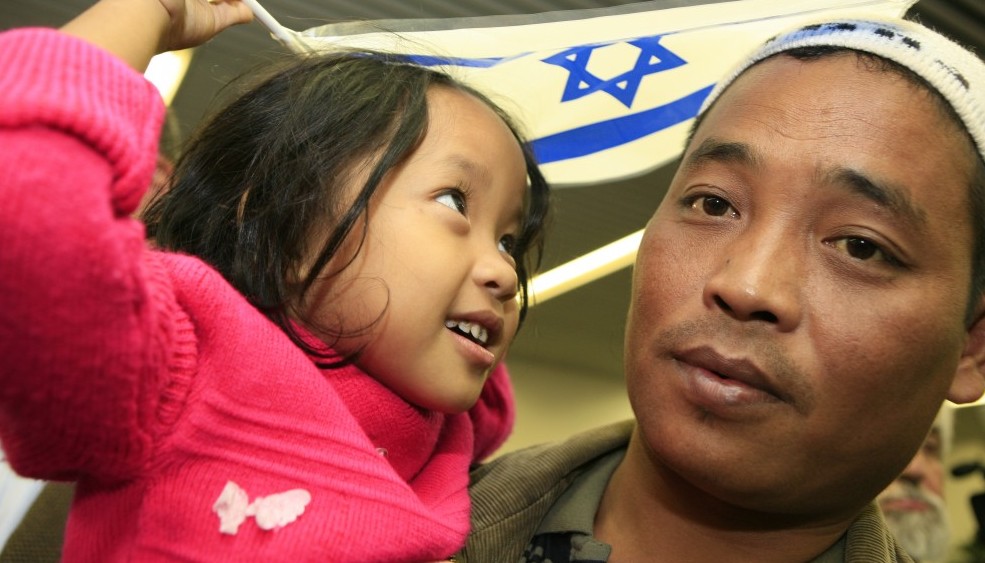 Danny Danon, Israeli Ambassador to the UN, has done battle with the UN and won.  The Israel Mission to the UN and Stand with US, an American organization advocating for Israel, jointly mounted an exhibit on Israel – that was to provide information about Zionism, Jerusalem and Arab Israelis, that was to be shown at UN headquarters in NY.  At first the UN censored the entire exhibit, and then said that the unit on Zionism could be shown, but not the units on the historical Jewish connection to Jerusalem or Israel’s treatment of its Arab citizens.

Danon held his ground, and now the entire exhibit is on display in an area that can be seen by diplomats and visitors.

See here for pictures of the elements of the exhibit (scroll down):

Laugh of the week: French Prime Minister Manuel Valls, who was just here, said that Israel should have faith in France’s peace plan.

Netanyahu’s response was clear: Israel rejects France’s plan because it does not provide an incentive to the Palestinian Arabs to compromise.

“In fact,” said Netanyahu, “the Palestinian prime minister, [Rami] Hamdallah, let slip the other day his hope for an imposed timetable, rather than a negotiated peace.”

Netanyahu subsequently proposed an alternative to the French plan:

“If you really want to help launch peace, then help us launch direct negotiations with Mahmoud Abbas.

“I’m ready to clear my schedule and fly to Paris tomorrow. Well, I think tomorrow we’re expanding the government, but the day after tomorrow.”

“Every difficult issue will be on the table,” Netanyahu told Valls, who said he would bring the proposal to President Francois Hollande.

It took no time at all for PA officials to reject this: “Netanyahu is trying to buy time… but this time he will not escape the international community,” declared  Hamdallah.

This is Netanyahu’s point precisely – that the PA is counting on coercion by the international community rather than working face-to-face for an agreement.

Is there a gain for Israel in this tactic of our prime minister?  With his eager suggestion (that includes a stomach-turning offer to put everything, which means also Jerusalem, on the table), has he at all demonstrated to the world that the PA and not Israel is obstructionist?  Or – as I suspect – does the world continue to see Israel as it wishes?  Will the world remember only that the Israeli prime minister offered to discuss the status of Jerusalem? (Rhetorical question.)

When does it become time for a different tactic?  One that relies heavily on documented information broadcast world-wide about PA support for terrorists (including their convoluted method for continuing to pay those in Israeli prison), continued incitement and all the rest?  How about saying that it’s time for the international community, if it is REALLY interested in peace in the region, to start to make serious demands of the PA to demonstrate peaceful behavior?

How many times do we have to show how “peaceful” we are?

I wrote recently about the bind of Israeli security officials who are called upon to act with compassion with regard to the needs of the populace of Gaza, and then get burned when good will gestures are utilized by Hamas.

When I wrote last, it was with regard to Gazan fisherman who brought in weaponry as well as fish.  Now there is a similar issue concerning cement.  Cement is one of those materials that is “dual use.”  It can be utilized for building houses, badly needed by people in Gaza, and by Hamas for building tunnels.

For six weeks, no cement has been allowed into Gaza by Israel, because it was uncovered (what a surprise!) that it was being diverted.  COGAT (the Coordinator of Government Activities in the the Territories, which works under the Ministry of Defense) said at the time that some quantity of cement was being taken by Imad al-Baz, deputy director of Hamas’s Economic Ministry.

Now with the announcement that cement will be let in again, certain stipulations – worked out in conjunction with the UN – have been put in place: Al-Baz has been dismissed and there will be more Palestinian inspectors on the Gaza side of the Keren Shalom crossing.

Now really…does anyone actually believe that this will solve the problem and that all of the cement will now go where it is supposed to?

Israeli authorities are either shockingly naïve (which I don’t believe) or are simply trying to cover their tracks.  The pressure on Israel to allow in material for the poor civilians to have housing is strong.  Somehow the problem, once again, becomes Israel’s fault.  Not the fault of Egypt, which has closed crossings and tunnels between Gaza and the Sinai. And Hamas, well, it builds tunnels and it is just being Hamas.

There is talk about an island in the Mediterranean beyond the Gaza coast that would have a port, so that nothing would have to go into Gaza via Israel.  That, clearly, presents its own serious problems, but the talk is an indication that Israeli authorities are weary of the status quo.

I’ve put up this song before, but once again, in this time of turmoil, it feels appropriate.

All of the world is a narrow bridge but the main thing is not to be afraid.

There are many versions; I’m sharing the same one I did previously, because I think the production, with children, is special.