With regard to the establishment of a government, I do not remember the situation ever being quite as unclear and in flux as it is now.

Part of the problem is that ministry responsibilities have not been precisely delineated – that is, there is overlap among various ministries.  Makes it tougher to understand who is accountable for what, and tends to generate tensions between those heading those ministries.

In addition, there are ministries in which responsibilities are shared internally or even farmed out to persons outside the ministry in question.  This is the case, for example, with Silvan Shalom, who is not in the Foreign Ministry and yet has been given responsibilities that might be expected to be within the jurisdiction of that ministry, such as strategic dialogue with the US.

And, to top it all off, there are MKs who have been given more than one ministry, although we are seeing shifts in that situation.

What I want to do here is provide an update on the situation since my last posting. But be forewarned: none of this is carved in stone and there may yet be other “adjustments.”

Last I wrote, I said that Gilad Erdan (pictured below), who is second on the Likud list, would not be taking a portfolio:  He had hoped for Public Security – which was in the end given to Yariv Levin – but only in conjunction with Interior – a position Erdan had held, but which was given to Shalom – because the two ministries work together.  He said that what he was offered by Netanyahu didn’t provide him with the tools to do his job effectively.  The problems that ensued here were a reflection of tensions between Netanyahu and Erdan, which have now been smoothed over. 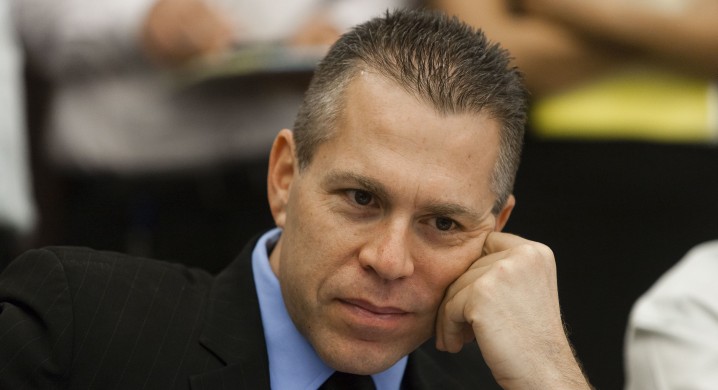 The word today is that Erdan will be Minister of Public Security after all.  And no, he will not be given Interior, but the reports are that he will be given a generous budget and possibly the Ministry of Strategic Affairs, which had been given to Ze’ev Elkin, along with Immigration.

Public Security is the statewide enforcement agency responsible for police, the prison system, rescue system, etc.  There are no independent local police departments – everything is overseen at a national level.  In light of terrorist acts inside of Israel and decisions that must be made regarding how to respond to them, this is a position of considerable import. An enhanced budget for police work seems to me an excellent thing.

Interior is the agency responsible for local government, citizenship and residency, identity cards, and student and entry visas.  Erdan had felt that coordination between local governments (municipal, etc.) and the services of Public Security was appropriate.

Erdan should have a place in the (inner) Security Cabinet now, as I understand it because of his involvement with Strategic Affairs – which is critical.

Reports are that – because of the limit on the number of ministers who can be appointed – Benny Begin will have to resign his position as Minister-without-Portfolio.

And there is yet one more piece of news regarding the government: Dore Gold, president of the Jerusalem Center of Public Affairs, will be taking a leave of absence from that position in order to serve as Director-General of the Ministry of Foreign Affairs.

Dr. Dore Gold – a long time advisor to Netanyahu and former Israeli Ambassador to the UN – is a good man.

A ministry routinely has a director-general, who oversees the operation, in addition to the minister him or herself.  Gold, it must be said, is a notably well-known personage to fill that role.  There are ways in which this may be good, because he has considerable prestige and depth of strategic understanding.  But I see something else happening as well: Tzipi Hotovely is Deputy Foreign Minister, and, as Netanyahu is retaining that ministry for himself, there are ways in which it might have been said that she was de facto Foreign Minister.  We’ve already seen, however, that certain responsibilities that might have been hers were assigned to others.

What I suspect here is that the presence of Gold in the Ministry may further undercut her autonomy and latitude to function.  This has to be watched.  What is certainly the case is that Gold will provide reports to the prime minister on what is happening vis-à-vis Hotovely.

What I close with here, is a marvelous statement last week by Hotovely – for Israeli diplomats and Foreign Ministry staff  – that has caused more than a bit of nervousness in certain government quarters, even as it has brought a smile to the faces of some of us (emphasis added):

“The international community deals with considerations of justice and morality. We need to return to the basic truth of our right to this land.”

Hotovely then quoted the late journalist Uri Elitzur, who said that for the last 40 years, while the Palestinians were demanding “their” lands, Israel’s has been that: “We have strategic interests and security concerns.”

Those arguments, she said, are the arguments of a robber.

“If I wear your coat because I’m cold, and I can prove pragmatically and analytically that it really is cold for me, the world will ask a primitive and analytic question: Who does the coat belong to? In this context, it is important to say that this coat is ours, this country is ours, all of it. We didn’t come here to apologize for that.”

Hotovely said the world understands Israel’s security needs, but arguments based on justice and morality always trump those dealing with security concerns.

Bravo to Deputy Minister Hotovely.  That took courage when the prime minister says we must keep the land for security reasons.