Early elections, that is.

The prospect has gone past the rumor stage, as Coalition Chairman Ze’ev Elkins (Likud), with the approval of most parties in both the coalition and the opposition, has just submitted a bill to dissolve the Knesset on Wednesday.  It will be approved by the Ministerial Legislative Committee on Sunday, expediting the process, and it is expected to come up for a preliminary vote as early as Monday.

This is news that is less than an hour old as I write.  Earlier today Knesset Speaker Ruby Rivlin had announced that different versions of such a bill would be submitted on Monday by Labor and Meretz.  What we’re seeing is that Likud and the ruling coalition is not only in favor, it is taking the lead.  Originally it was said that the motion would not be submitted until Netanyahu had completed his week of shiva on Sunday, but Likud is moving even faster than this — although votes won’t take place until after the prime minister’s initial mourning period for his father is over.

The Knesset has to be dissolved before there can be elections — right now elections are set for October 22, 2013.  Once the Knesset  — Israel’s 18th — is dissolved, a recess will be declared; 25 or more MKs can call it into session, however, to attend to legislative matters.

This coalition, headed by a politically astute Netanyahu, had for an extended period of time seemed exceptionally stable, so that predictions were that it might last for its complete term.   It is his political savvy that has motivated him now to sanction early elections — so that he might take advantage of his current strength.  He, of course, fully anticipates that he will be returned to the head of the ruling coalition, and thus to the office of prime minister, after elections.  And if, indeed, that does turn out to be the course of events, he anticipates that he will be riding on even greater strength.

I had cited a (rumored) prospective date for elections of August 4.  Turns out that it will likely be later than this — with Likud said to favor September 4.  The idea here is to move before Shaul Mofaz, new head of Kadima, fully has his act together, and before Yair Lapid (below), who left his position as a TV news anchor to go into politics, fully consolidates his new party.  Whether he presents a real challenge of any sort, or is, as I strongly suspect, simply a flash-in-the-pan novice with a pretty face and a TV reputation remains to be seen. 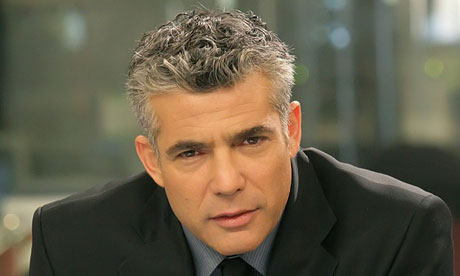 At the latest, elections are likely to take place before the Jewish High Holiday season, which this year begins mid-October.   I’ve heard thoughts that completing our electoral process before the US election is also a consideration.

Ehud Barak announced today that his party, Independence, which he formed in January 2011 when breaking away from Labor, would run on its own in the coming election — not jointly with any other party. There is considerable question as to whether this party can garner enough mandates to pass the threshold for entering the Knesset.  What is significant here is that for a time there was talk of Netanyahu arranging for Barak to have a place on the Likud list that would ensure him a seat in the Knesset.  There was, however, tremendous opposition to this on the part of many in Likud, and this notion has apparently been abandoned.

(A note of explanation: parties, not individuals, run for the Knesset. These parties compile lists; the number of people on the list, in descending order, who end up with seats in the Knesset is determined by the percentage of votes the party receives.  Those high up on a Likud list will be assured of Knesset seats.)

It must be kept in mind, however, that someone who is not in the Knesset can still be appointed as a minister in the government; failure to achieve a Knesset seat would not mean that Barak could not still be Defense Minister in a new government.

All this, and more, is yet to be determined as the new political drama plays out.

I will mention here just a couple of articles that merit attention, and then move to get this out:

The first is by Khaled Abu Toameh, who consistently tells it straight.  In “Pro-Palestinian or Anti-Israel?” he writes:
“Pro-Palestinian groups and individuals in the US and Europe are doing Palestinians injustice by devoting all their energies only against Israel.

“There is a feeling in the West Bank and Gaza Strip that most of these groups and individuals are more interested in campaigning against Israel than helping the Palestinians.

“Being pro-Palestinian does not necessarily mean that one also has to be anti-Israel.

“…Those who care about the Palestinians should come to the Gaza Strip and work toward promoting human rights under Hamas — of children, women, and journalists.

“It would help immensely if hundreds of pro-Palestinian activists came to the West Bank and Gaza Strip to teach Palestinian children English and expose them to the benefits of democracy and Western values, such as equal justice under law, free speech and a free press, and financial transparency and accountability

“It would also help immensely if these activists came to the West Bank and Gaza Strip to offer advice on, and help in building, proper government institutions, and in combating administrative and financial corruption.

“But as far as many of the pro-Palestinian activists in the West are concerned, the interests of the Palestinians are not as important as hating Israel.”

And then, there is the astute Fouad Ajami, writing in the Wall Street Journal, “Can Obama Run on His Foreign Policy Record?”

“…this administration has done its best to take the vital matter of America’s place and interest in the foreign world off the board. The strategic retreats, the concessions made to Iran and Syria, the lack of faith in liberty’s place in the order of nations have been hidden and brushed aside. (Emphasis added)

“…He heads into November with that complacent view of things. Always the cool, cerebral man unfazed by history’s turbulence and pain.  The joke was on those foreign lands, in Paris and Berlin and Cairo, who embraced him as a new kind of American leader.

“He had present himself as a cosmopolitan man — the un-George W. Bush. But the cosmopolitanism was just a veneer. Underneath the affectation of worldliness, there lay a calculating politician with superficial knowledge. They have caught on in Karachi and Cairo, where the star of 2008-2009 has come down to earth. And they’ve caught on in Tehran and Damascus, where tyranny has had little to fear from the standard-bearer of American power. (Emphasis added)