I waited until the official presidential election results in Egypt were announced before doing this post.  Word has just come out from the Supreme Presidential Electoral Commission that, in the presidential election run-off, the Muslim Brotherhood candidate, Mohamed Morsi (or Mursi), has garnered 51.7 % of the vote, defeating former general Ahmed Shafik, who was prime minister under Mubarak.

Morsi, it should be noted, is a US-educated engineer, and spent time in jail during Mubarak’s regime.

This is the first time in 60 years that the president of Egypt will not have come out of the military.

In Tahrir Square, where tens of thousands of Islamists had been waiting impatiently for the results to be announced, a cry of Allahu Akbar (“God is great”) went up. 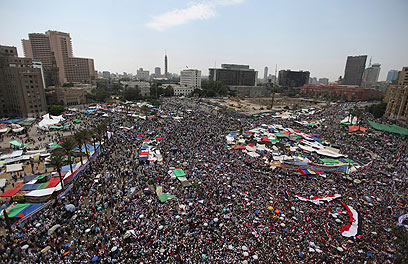 Egypt is still badly divided and fraught with tensions, however, and it remains to be seen how a variety of factors will play themselves out with regard to Morsi’s leadership:

[] What sort of government he will form.

[] How much control the military will retain.

[] What his relationship with the US will be.

[] Whether he will work to retain the peace treaty with Israel.

[] Whether he will seek to regain and sustain control of the Sinai.

[] What his relationship with an ecstatic Hamas and other terrorist groups will be.
~~~~~~~~~~

That Egyptian Islamists are jubilant at the moment is not a fact that warms the hearts of Israelis.  This is what Dore Gold wrote recently:

“…on May 1, 2012, an Egyptian cleric, Sawfat Higazi, who shared the stage with Morsi announced: ‘we can see how the dream of the Islamic Caliphate is being realized, Allah willing, by Dr. Mohamed Morsi and his brothers, his supporters, and his political party.’ He added ‘Our capital shall not be Cairo, Mecca, or Medina. It shall be Jerusalem, Allah willing our cry shall be: “Millions of martyrs march toward Jerusalem.”‘”

Morsi may end up making Mubarak’s “cold peace” look warm: he has made statements indicating that he will retain the peace treaty with Israel, but that he will not meet with Israeli leaders, and will make the “Palestinian issue” a priority.

He has also gone on record as saying he wants a larger military force in the Sinai.  The rationale here would be the need for that force in order to gain control of the area. But this would contravene the peace treaty — which very deliberately structured the Sinai as a non-militarized area between Egypt and Israel — and would present a threat to Israel should matters deteriorate.

Obama has courted the Brotherhood in a variety of contexts.

(See, for example, Jihad Watch on this here: http://www.jihadwatch.org/2012/01/obama-administration-holds-talks-with-muslim-brotherhood-speeds-pace-of-aid-to-egypt.html.

And so it’s a reasonable bet that he will reach out to the new Egyptian president now.

In fact, it’s even worse than this.  According to the Gold piece cited above:

“…spokesmen for the U.S. State Department and the Pentagon decided [just days ago] to press the Egyptian Army to relinquish the governing role it is seeking to carve out for itself.”

Obama had a hand in the situation that led to the election of a member of the Brotherhood to the Egyptian presidency.  We need yet more destructive meddling?

There have long been tensions between Egypt and the Saudis.  The current situation exacerbates this, as neither Saudi Arabia nor the Gulf States are comfortable with the turn of events in Egypt.

And that leads to other information that I’m picking up, strictly unofficially, regarding enormous Saudi discontent with Obama.

There are several issues I would like to simply touch upon here, with the understanding that most if not all require close watching and likely further comment:

There was a continued barrage of rocket and mortar attacks from Gaza over Shabbat and into last night.  These included Grad rockets that were stopped by Iron Dome installations.

Presumably a “cease fire” was arranged via Egypt, but, after some hours of quiet, it was broken again  late in the day today.  Netanyahu made an announcement about how quiet will be met with quiet, but if we continue to attack we will respond with force.  This is all so terribly deja vu.

Of course, the responses by the IAF, such as they may be, are insufficient to really stop what’s happening.  Routinely, when we’ve been in this situation — which is totally unacceptable to Israeli civilians in the south — I’ve called for an appropriately harsh response.

This time, I have not gone in this direction, simply because I understand that we may be gearing up for something a great deal bigger and so cannot afford to draw on resources here now.  I will not second-guess this situation.

Deputy Prime Minister Mofaz ended up meeting with President Obama during his visit to Washington last week.  There had been no official visit scheduled. It was, rather, one of those carefully choreographed “spontaneous”  meetings in which “the president dropped by.”  Mofaz, who was meeting officially with US National Security Advisor Tom Donilon, assured an undoubtedly delighted president that with the new coalition here in Israel (now including Kadima), there was a new window of opportunity for peace negotiations.

“A new window of opportunity.” What a hackneyed and over-blown political phrase.

I ask again the question I posed the other day:  Is Mofaz blowing in the wind, or has something been cooked up?

When thinking about what might be done — Heaven forbid! — to entice Abbas to the table, please consider this greatly unsettling item, which I picked up from IMRA (with commentary):

“As a goodwill gesture to the Palestinian Authority (PA) and Russian President Vladimir Putin, who arrives here [Israel] June 25, military officers have proposed that Israel approve a long-delayed transfer of some 50 Russian armored troop carriers to Ramallah.
“Moscow donated the used vehicles several years ago to augment the Palestine Security Forces’ ability to maintain order in the West Bank, but they have been languishing on the Jordanian side of the border since 2010 pending Israeli technology transfer approval.”

Bolstering PA military capacity is a VERY bad idea and generates risks for Israel.  There is a history of members of PA security forces turning their weapons on Israel.

I’m seeing a variety of commentaries, all somewhat speculative, regarding both the enormous likelihood of an Israeli attack on Iran, and the possibility of US military support in this regard.

As I said, speculative. But worth a mention.

The scuttlebutt — and this has been my own unofficial speculation — is that if we do hit, it will be before the US election.  This is merely a question of logic: when facing the electorate, Obama would be constrained in his response to Israeli military action; after the election, if — may it not happen — Obama were to be re-elected, the dynamic would be different.

Lastly, I mention here the issue of the huge cache of non-conventional weapons (chemical and gas) that Syrian president Assad possess.  As the situation in Syria becomes more and more unstable, the concern is that these weapons might fall into the hands of a terrorist group, most notably Hezbollah. The situation is being watch closely, both by international forces (including the US) and by Israel.

Either the US or Israel is very likely to act on this, should Assad be on the verge of falling — either securing the area around the cache with military or hitting the relevant sites.

This post, with its battery of very grim reports, begs for an up-beat ending. And so some good news from http://theverygoodnewsisrael.blogspot.co.il .  There truly is a great deal that is “very good.” A brief sampling:

[] Israeli men have the 3rd longest life expectancy.  Only men in Switzerland and Iceland live longer.  How about that?

[] Israel leads the world in water technology. In 2015 when water taps in Israel are turned on, 75% of the water will come from desalination plants. Today, already 80% of water used in agriculture is recycled wastewater.

[] Mosab Yousef — the son of Hamas’s founder, who had a radical change of heart — spoke to thousands of Druze soldiers during Druze Soldier Day in Tiberias.  “It is time that the neighbors will learn from Israel what the value and holiness of life is.”

[] A new paper, co-authored by Ph.D. student Noam Josef and Dr. Nadav Shashar of Ben Gurion University’s Department of Life Sciences, on how the octopus makes itself invisible, suggests that octopi focus on a limited selection of nearby objects in order to determine their disguise.  See this incredible YouTube video: http://www.youtube.com/watch?v=JJq-wAUmkeg&feature=player_embedded .