Golani Staff-Sergeant Dvir Emanuelof (22), who died of his wounds from a mortar attack in Gaza, was laid to rest in the Mount Herzl Military Cemetery in Jerusalem last night. Thousands attended.

It is being reported that he told his mother, “Ima, I have to fight.”

I salute him, as does all the nation.

See here for a video clip of reservists off to serve. It does us proud.

Livni has met with representatives of all the major humanitarian organizations providing relief in Gaza to determine precisely what needs are. Crossings were closed yesterday, with the beginning of the ground incursion, but humanitarian supplies will be going in again today.

Our four brigades in Gaza have successfully surrounded Gaza City and divided the Strip in two. What this does is cut off the flow of men, weapons, and supplies to the north, and interfere with Hamas’s command-and-control facility.

Now our operation is being expanded as we go after the military wing of Hamas, Izz al-Din Al Qassam Battalions — both men and infrastructure. This fighting force still retains considerable strength, and were it to emerge at the end of the war with much of its fighting power intact, it would not only have capacity to hit us yet another day, it would also provide Hamas leadership with the rationale for declaring that we didn’t, and couldn’t, defeat them.

Thus this is a critical operation. But it is also a dangerous one.

According to Palestinian sources, our troops are on the outskirts of Beit Lahiya, Jabaliya, Saja’iya, and al-Attara. Homes, where gunmen, supplies and tunnel exits are hidden, are being surrounded, shot at, and, as appropriate, entered.

The heart of nation is with the soldiers conducting this necessary battle.

It certainly appears that a good deal has been learned since Jenin, where our men were ambushed in small alleys. I read of one operation in which holes were shot in the sides of houses before they were approached. Troops in certain circumstances are accompanied by dogs from a K9 unit that can sniff out booby traps; soldiers move around to avoid becoming stationary targets; troops in the dark use night-goggles and camouflage their faces. Attack helicopters hover overhead when appropriate, accompanied by drones, and release flares to confuse shoulder-launched heat-seeking anti-aircraft missiles. Artillery units shell heavily to support troops on the ground.

According to YNet, another target of our operations is Hamas’s fortified defensive system that exists both below and above ground. Action on razing this system will come in stages, as the IDF is working to secure additional intelligence.

A senior IDF officer has indicated that our troops are prepared to enter urban areas if this becomes necessary: “This is what the troops have trained for and are designated to do — to fight in densely-populated areas,” the senior officer said.

Over the past year, all of the troops that have been deployed in Gaza or may be deployed there, have received training at the IDF’s Ground Forces Command Urban Training Center near Tze’elim.

“We built models for them of places inside Gaza. There are places that replicate city outskirts, the casba marketplaces and over-populated refugee camps.”

Defense Minister Barak gave a briefing to the Knesset Foreign Affairs and Defense Committee today, in which he said the operation is “being held as planned”:

“Gaza City is partially besieged and the forces have reached the ground targets we set for them…Hamas has suffered a very heavy blow, but we have yet to reach the goals we set for ourselves, so the operation continues.”

He indicated that armored, engineering and artillery corps were taking part in the ground operation, supported by the Navy, Air Force and special units.

Yesterday, Prime Minister Olmert had phone conversations regarding a cease-fire with Tony Blair, the Quartet’s Middle East envoy; German Chancellor Angela Merkel; and Russian President Dmitry Medvedev.
According to the Prime Minister’s Office, Olmert presented them with Israel’s demands for a truce: The end of all projectile fire on Israel, the end of all terror acts, international monitoring of Gaza and the complete disarmament of Hamas.

Olmert, we are told, emphasized that Israel will continue its operation in Gaza until its conditions are met.

Reuters is reporting that an Israeli demand with regard to monitoring by international forces has to do with the Philadelphi Corridor and insuring that no further smuggling is going on. Israel wants fortifications along the stretch of the Corridor, with monitors that are heavily armed and equipped to search out and destroy tunnels that may be re-dug.

“The war in Lebanon ended in a diplomatic arrangement, but today we are in a different place. The objectives today are military. We went in to strike against terrorism, and to impair the capabilities and motivation of Hamas. My position in favor of a long-range goal of toppling Hamas is known; this is not a one-time operation… For this situation to end in a diplomatic arrangement with Hamas would be contrary to our strategic goals; our diplomatic activity concentrates on weakening Hamas and striking it, as I described… Anything that weakens Hamas is good from our standpoint.”

Today she said to visiting foreign ministers (mentioned below) that Israel intends to “change the equation in the region” as the days of “Hamas firing rockets and Israel showing restraint” are over. She indicated that there was no constructive place for international observers yet, as Israel needed time to complete the military operation.

“Complete” — this indicates she is seeing international involvement as a follow-up to, and not a substitute for, our victory.

The northern border with Lebanon is being closely monitored in event of attack from Hezbollah there. UNIFIL and the Lebanese army have raised an alert with regard to this possibility.

Barak has indicated that we would be prepared to fight on both fronts at one. In fact, some of the thousands of reservists who have been called up, but have not yet been sent into Gaza, are being held back and prepared for this eventuality.

But the Lebanese Information Minister Tarek Mitari said today that Lebanon has no intention of being dragged into a war with Israel over Gaza and believes this is Hezbollah’s position as well.

A closer look, however, indicates something else. Our intelligence sources indicate that numerous Hamas leaders are still hiding in hospitals.

And it has been announced from Hamas’s political wing in Damascus that a Hamas delegation — headed by Imad al-Alami and Mohammad Nasr — will be visiting Cairo next Monday to discuss Israeli “aggression,” opening of border crossings, and lifting of the blockade. As if Egypt can negotiate a ceasefire with Israel to make this possible now.

Perhaps most significantly, even though it was mentioned last, the mission will be discussing an Egyptian proposal for reconciliation with Fatah. This is what they had refused to do previously. This is a bid for increased legitimacy and for tempering the relationship with Egypt.

It is unlikely that there will be any permanent alliance between Hamas and Fatah. As Martin Kramer, of the Adelson Institute for Strategic Studies, says, “Hamas assumes (probably correctly) that its Palestinian opponents fed Israel with much of the intelligence it needed to wage precision warfare against Hamas. There is likely to be a vicious settling of scores as soon as a cease-fire is in place, if not before.”

Rockets are continuing to fall on Israel. Yesterday 50 were launched and today by late afternoon there had been over 30. This includes Grads that wounded nine people in Ashkelon. Rockets have hit several other locales as well, including Ashdod, Sderot, and Yavne.

It has been revealed that a Grad rocket shot into a Beersheva kindergarten at the end of December contained ball bearings to increase injuries. Thank Heaven, the decision had been made to close the schools, so no one was present.

It is feared that Rishon LeTzion and Rehovot, both over the 40 km. line — which represents the farthest that any rockets have reached thus far from Gaza, may be vulnerable to attack. They are preparing bomb shelters.

A report from the London Times indicates that there is Israeli concern that Hamas may have acquired Iranian-made Fajr-3 missiles, which have an even greater range.

Hamas has made claims about having kidnapped some of our soldiers, but the IDF is denying this.

Hamas has shot a number of Fatah-affiliated people in Gaza in the leg, to “insure” that they don’t fight on behalf of Israel. (A mere hint of what Kramer has suggested will be coming.) It has been revealed, however, that Al Aksa Brigades, a terrorist arm of Fatah, is fighting against Israel in Gaza.

The stream of international visitors who are here to push for cease-fire has begun. The European delegation consists of Czech Foreign Minister Karel Schwarzenberg, who heads the group, French Foreign Minister Bernard Kouchner, Swedish Foreign Minister Carl Bildt, European Union foreign policy chief Javier Solana and Commissioner Benita Ferrero-Waldner. Some of the visitors will be going to Egypt and Ramallah as well. A report on this — including an expansion of Livni’s comments — will follow tomorrow.

Here I would like to mention French President Nicolas Sarkozy, who is coming on his own. Sarkozy was one of the first to criticize Israel when this war started, calling our actions “disproportionate.”

But he has told a Lebanese paper that “Hamas is largely responsible for the suffering of the Palestinians in Gaza.” 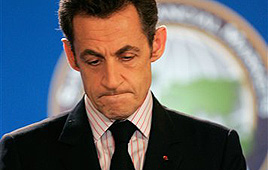 Speaking of things French, there is this good news: Yesterday there was a pro-Israel rally of 12,000 persons in Paris. Paris! 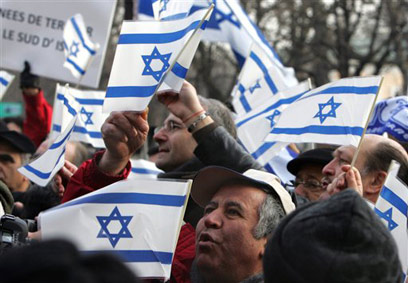 While in Harlem, New York City, Bishop Carlton Brown of the Bethel Gospel Assembly led a pro-Israel prayer service for 1,000 worshippers. All of NY’s TV stations covered this.

Listed here for your information are a number of scheduled pro-Israel rallies to take place in the US, sponsored by StandWithUs. Listed by time:

You don’t have to stop here! Go to Current Postings, starting with this one and going back. You can post a response, send this by e-mail to a friend.

“Should the next minister of education opt not to revoke this decision, the end result would be that the Israeli school system would strive to convince Israeli Jews that the arguments rejecting Israel’s very existence are legitimate.”

I think at some point it would be appropriate to ask some very hard questions about how Jewish Israelis could have arrived at this self-hating place.

Another plus for Netanyahu, who promotes re-vamping of the school system and the teaching of Zionism.

Some weeks ago there was a report about a huge natural gas pocket discovered off the coast of Haifa that was sufficient to provide all of Israel’s needs for 15 years. It has now been announced that the find is actually 60% larger than had been anticipated.

The implications are enormous.

Yesterday, at long last, we had some real winter weather with torrential rain andwind. This is a blessing and it is to be hoped a harbinger of more blessings to come.