All is quiet in the north now. There are those who think it’s just a matter of time until we are attacked again, and that we are certainly closer to major hostilities than we were before this most recent attack.  That something major is coming down the road, at some point, is clear.  But I would not rush to assume that we are now closer to it.

Hezbollah sent a message via Gen. Luciano Portolano, commander of UN forces in Lebanon (UNIFL), overnight, indicating that they are not seeking an escalation of tensions.

As was expected, Hezbollah declared that it considered this an “eye for an eye” regarding our hit on their people in the convoy in the Golan.  Their honor, dignity, whatever, has ostensibly been salvaged with the death of two of our soldiers, and for now they are content.

Among political analysts there are two schools of thought regarding Hezbollah’s current situation.  One says that this radical terror group, in fighting for Assad in Syria, has been depleted (hundreds of their fighters killed) and drained – and thus is in no mood to take on Israel now.  The other says that whatever the stresses of fighting have been for Hezbollah, the experience has honed their battle skills so that they are better equipped to confront Israel than they were before.

I am not certain that the two are necessarily mutually exclusive.  They might decide to wait before advancing a major confrontation, but might ultimately be more dangerous opponents than they would have been if not for the Syrian battles.

Maj. Gen. (ret.) Yaakov Amidror, former national security advisor, says that the last thing Hezbollah needs now is to open a second front: “The chances (of an escalation) are very slim, almost none,”

Other matters, as well, must be factored into predictions regarding Hezbollah actions in the coming days and months:

There is, as I have mentioned, great dissatisfaction inside of Lebanon with what Hezbollah is doing.  See more about the mounting criticism here:

And there are also apparently financial difficulties for Hezbollah.  It “may be on the cusp of a financial crisis”:

And, most significantly, there is Iran.  If Hezbollah were to take on Israel in a major confrontation, it would be at the bidding of Iran; Many analysts believe that Iran would be reluctant to “waste” Hezbollah on this now, when it is not yet time.  Hezbollah is being “saved” for the moment when Israel might decide to attack Iran.  (More about Iran below.)

Then, of course, on the other side, there is the reluctance of Israel’s leaders to engage in a major confrontation with Hezbollah now (the proclamations of Foreign Minister Lieberman regarding the need to do more notwithstanding). We are in an election campaign, and a war now would not serve Netanyahu’s electoral aspirations.  The death and damage that would ensue would cause many to turn against him – whether fairly or not.

But let me add, lest the above be read improperly: while our leaders may not wish to go the route of war now, our military is prepared and on the alert, and would respond if necessary. The IDF is actually on high alert in the north, and has begun searching for tunnels Hezbollah may have been excavated a la Hamas.

What I must say is that I wish never, ever again to see pictures such as these below here in Israel, or to have to share them.  These were taken at the funeral of Maj. Yochai Kalangel, 25, who was killed by Hezbollah.  He was buried in the military cemetery at Har Herzl earlier today.  Perhaps some can look at these photos without a wrenching of the heart or a tear in the eye, but I cannot.  Nor can many others here.  The pain is palpable.

The woman is Kalangel’s widow, who has a one year old child.  I am assuming the man is his father, who said at the funeral that “Where you should have buried me, I bury you.”

St.-Sgt. Dor Haim Nini, 20, from Shtulim, was buried in his home village later in the day today.  Yesterday, his girlfriend, Sahar, posted a picture of the two of them on Facebook, and wrote “good morning my love.” Nini saw it, “liked” the photo and wrote, “you are my life. I love you.” Hours later, he had been killed.

Good people, good soldiers cut down in their young lives.  I never want to have to share such photos or stories again.  But as surely as I am sitting at my keyboard now, I know I will have to.

It is worth mentioning that the US stance on this was supportive.  Jan Psaki, State Department spokeswoman, said: “We support Israel’s legitimate right to self-defense.” She added that Washington condemned the attack.

This statement lacked the absolute “evenhandedness” that so often mars comments from State; apparently it’s politically correct to criticize  Hezbollah.

Netanyahu, in the last couple of days, has pointed a finger at Iran, as being ultimately responsible for the Hezbollah attack.

“Iran is the one which is responsible for arming, organizing, funding and deploying terrorists on Israel’s northern and southern borders.” (Emphasis added)

In another statement yesterday, the prime minister said, “For some time, Iran – via Hezbollah – has been trying to establish an additional terrorist front against us from the Golan Heights.” (Emphasis added)

And I think with this we come full circle.  We attacked the convoy in the Golan because intelligence suggested a good possibility that high level military personnel were present in order to advance plans for establishing a base there that might even include rocket launching equipment.

Now there is talk in some quarters about the need for stronger Israeli action against the killing of our soldiers in the attack launched from Lebanon – the claim is that this is necessary for deterrence.  But as I see it, our deterrence was advanced most powerfully via the attack on the convoy in the Golan.  Hezbollah seeks that base in order to be able to attack Israel without involving Lebanon.   But Hezbollah and Iran have been warned that we are on to their intentions and will not permit this.

On the subject of Iran, I share here two articles.

“In his State of the Union address, President Obama forcefully announced he would not accept ‘a nuclear-armed Iran.’ This reflects his view that the only objectionable element of Iran’s behavior would be acquisition and possible use of such weapons. This is conveniently narrow.

“While the ability to produce nuclear weapons quickly and in secret – if it hasn’t already done so – is important, Iran pursues a wide variety of long-term Shiite religious and Persian imperial goals in the Middle East and Africa, and in the Western Hemisphere…

“…With his focus solely on nuclear weapons, President Obama has missed perhaps the last, best opportunity to stymie the mullahs.

And then, Khaled Abu Toameh, “How Iran is Circling the Gulf and Israel” (emphasis added):

“…Relations between Iran and Hamas had become strained after Hamas’s refusal to support the regime of Iran’s client, Syria’s Bashar Assad, in his fight against the Syrian opposition forces.

“Iran and Hamas need each other badly. Iran wants Hamas because it does not have many Sunni allies left in the region. An alliance with Hamas would enable Iran to rid itself of charges that it is leading a Shiite camp fighting against the Sunnis.

“Hamas, for its part, is desperate for any outside support, especially in wake of its increased isolation in the Palestinian and international arenas…

“Hamas leaders say they have taken a ‘strategic’ decision to restore their ties with Iran. Ismail Haniyeh, the former prime minister of the Hamas government in the Gaza Strip, announced recently that his movement is working toward establishing “open relations” with Iran…

“The Hamas-Iran rapprochement is yet another sign of Tehran’s effort to use its allies in the Middle East to destroy Israel. Hamas leaders are now hoping that Iran will resume not only its financial aid to their movement, but the supply of weapons as well.

“Iran is not interested in the reconstruction of the Gaza Strip or providing shelter to thousands of Palestinian families who lost their homes during the last war. The only thing Iran is interested in there is turning Hamas into another Iranian-backed army that would be used to attack Israel. This is all happening at a time when the Obama Administration is busy preparing for another round of talks with Iran over its nuclear program. It is obvious by now that Tehran is using these negotiations to divert attention from its efforts to deepen its involvement in the Middle East, with the hope of taking over the oil fields and eliminating Israel.”

This is stuff to make the blood run cold.  And it is with this that I stop my political reporting tonight.  Who knows what’s coming down? Who cares?

I think part of what enrages me so much is the on-going hullabaloo about Netanyahu’s plans to speak to Congress when Obama doesn’t want him to.  Here in Israel, the left is carrying on because this may give him an electoral advantage.

The bottom line is that where Iran is concerned, people should eagerly embrace an opportunity to hear what Netanyahu has to say.  And we Israelis should hold our heads high, for we have a leader who gets it right – and has something to say to the Congress.

Dear friends, I urge you to share Khaled Abu Toameh’s article broadly – and most specifically with your senators and congresspersons.  This is a matter that must be brought to the attention of those who can make a difference.

Let’s close with something upbeat.  Because we must hold on to what can sustain us:

Yesterday, I saw for the first time that the almond trees (the very first to blossom) are in bloom. This means that – while winter weather, hopefully, will return to bring us more rain – spring is around the corner.  Something to lift the spirits.  (Yes, I know, parts of N. America are buried in snow – but allow your spirits to be lifted, at least in this regard, vicariously.) 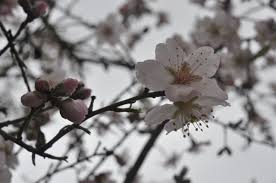