Newt Gingrich, surprising a whole lot of people, ran away with the Republican primary election in S. Carolina yesterday.  He  has garnered at least 23 of S. Carolina’s 25 delegates to the Republican convention. 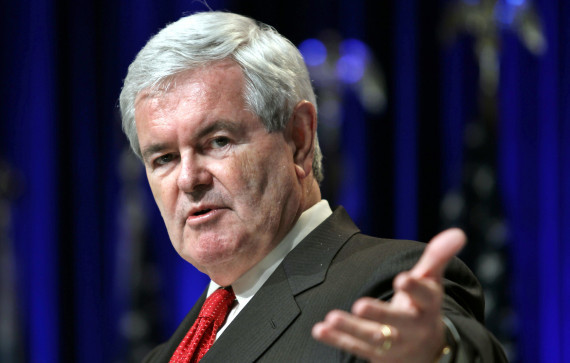 Analysts attribute this win to Gingrich’s feisty delivery at the two S.  Carolina debates — in Myrtle Beach and Charleston.  He’s focused, articulate, and unafraid of confronting facts that are politically incorrect.

During his speech to supporters last night, he declared:
“The centerpiece of this campaign, I believe, is American exceptionalism versus the radicalism of Saul Alinsky [the founder of modern techniques in community organizing, who wrote ‘Rules for Radicals’].

“If Barack Obama can get re-elected after this disaster, just think how radical he would be in a second term…

“President Obama is a president so weak that he makes Jimmy Carter look strong.”

With regard to energy independence, he said:

“I want America to become so energy independent that no American president ever again bows to the Saudi king.”

Remember that?  No one in America should forget. With regard to Obama’s decision on Keystone [which involved his rejecting an offer made by Canada to bring an oil line into the US, after which China expressed an interest], he observed:

“An American president who can create a Chinese-Canadian partnership is truly a danger to this country.”

The NY Sun put out an editorial today about Gingrich’s S. Carolina win — “Gingrich’s Synthesis” — that is worth reading:

“Newt Gingrich is on his game, to judge not only by his victory in South Carolina but the remarkable speech he delivered when the vote was in. It seemed as if he’d waited for months to get the whole country’s attention, and when he had it last night he laid out a full vision…

“…What struck us as so shrewd in Mr. Gingrich’s display last night was not his ability to divide but to synthesize [drawing on ideas of others and giving credit]…”

What he has done with this approach, says the Sun, “is a mark of leadership.”

“It certainly puts Mr. Gingrich in a good position going in to Florida. We say that not as an endorsement, rather as merely an observation…The synthesis of ideas Mr. Gingrich unfurled in the Palmetto State suggests we are in for one of the great nominating contests of our time.”

http://www.nysun.com/editorials/gingrichs-synthesis/87667/  (And thanks to Chana G. for calling my attention to this.)

I have made no secret of the fact that I favor Gingrich as the Republican candidate because (whatever others perceive) I see him as having an excellent chance to not only beat Obama — the first order of business — but also to be a very fine president:  He is exceedingly sharp and has a solid command of the issues; I was excited some long while ago when he made statements about Islamists and terrorism that told me he really knows what’s what.  He has a solid record behind him.  And he’s a fighter (in the positive sense) with staying power.

However this campaign may ultimately resolve itself, today I find that I am energized and more hopeful.  The next hurdle is the Florida primary on January 31.

I will, however, also sustain my AABO (almost anyone but Obama) position, which means that — whatever my personal preference — I will gladly and without qualification support Santorum or Romney should one of them get the Republican nod.  Obama is such a nightmare that defeating him must take precedence over a great many other considerations.  He is on his way to fighting a dirty campaign — seriously misrepresenting his devotion to Israel.  And I will shortly return to this important theme to consider it in greater detail.

Here, I want to note simply that Obama continues to insist that he is a huge supporter of Israeli security.  Let’s pass, just for the moment, on issues such as his wanting to push Israel to the ’67  line (with perhaps 2% adjustment), when this is clearly not in Israel’s best interest from a security perspective…

Last night I heard journalist/commentator Caroline Glick speak here in Jerusalem.  The point she made was that with regard to Obama’s Middle East policy, everything he has done has been wrong and has weakened the US.  It has been my position, consistently, that a weakened US also weakens Israel’s security — and I will continue to maintain this argument in countering his claims.  But it goes beyond this to a weakening of Western interests.

Some of Glick’s comments on Obama:

With new anti-American forces that have emerged with the so-called “Arab Spring,” the US national interests have been hurt in a fundamental way.

“Everything the US is doing is inimical to its own interests and empowers its enemies.” Examples:

The US has intervened on behalf of the Muslim Brotherhood in Egypt since 2009: When Obama addressed the “Muslim world,” in his speech at Cairo University (a Brotherhood stronghold), he was embracing the Muslim Brotherhood vision of a pan-Arab world [i.e, united by Islam — via a caliphate].  This was a rejection of Arab nationalism and constituted a direct hit on Mubarak’s national legitimacy.  Subsequently, Obama played a primary role in transferring power in Egypt from an ally (Mubarak) to an enemy (the Muslim Brotherhood).

The US has how embraced Turkey, which is moving into the Islamist camp, as its most solid ally in the Middle East.

Obama refused to support the Green Movement in Iran, which was seeking to overthrow the Islamist regime, even as they begged for assistance.

Obama, however, embraced the Gadaffi opposition, even though Gadaffi was not a significant threat and the opposition was strongly influenced by the Muslim Brotherhood.

“Obama has made clear that if you are confrontational to the US, he will support you, while if you show a pro-US tendency, he will betray you.”

Under Obama, the US is actively supporting forces that want to destroy the US — is, for example, negotiating with the Taliban.

Is the picture beginning to emerge for you?

A power outage today slowed me down significantly.  All else will wait for another day…