From Israel: “When the Impossible Smacks Us in the Face!!”

It is 18 years since my aliyah.  Had someone told me back then that in less than 20 years there would be a plague of anti-Semitism in the US, I would have responded: “In America?  No way!  Impossible!”

But I would have been wrong. 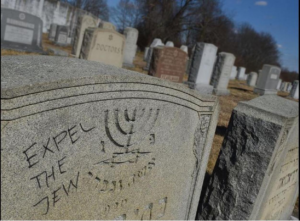 Jew hatred is the oldest persistent hatred in the world.  It is perennial: It seems to disappear and then appears again, frequently in a different guise. It cannot be explained rationally, for it is not rational.

If we try to explain it, not only do we go far afield in terms of understanding it, we run the risk of making ourselves somehow culpable. It becomes a matter of what we have done, or how we have behaved.

Yehuda Bauer, a scholar of the Holocaust, believes that anti-Semitism remains latent until it is triggered, usually during a crisis. His thesis makes sense: the world is in the throes of enormous turmoil today, and we are seeing a concomitant emergence of vicious anti-Semitism.

Wherever we look today, we find it. We are all aware of the incidents of anti-Semitic violence of major proportions that have occurred over the course of the past 15 months: the shocking and murderous attacks on synagogues in Poway, CA and in Pittsburgh, PA; the massacre at a kosher market in Jersey City, NJ; and, most recently, the attack at a rabbi’s home in Monsey, NY, when an intruder burst in with a machete and knifed five people, one of whom may never regain consciousness.

But these are “only” the most blatant and explosive examples of a phenomenon that is wide-spread.

The anti-Semitism on US college campuses has been prevalent and growing for some time. By way of example: At Indiana University, a group of some 11 members of Pi Kappa Phi made anti-Semitic slurs and violently attacked and beat three members of the traditional Jewish fraternity, causing them concussions.

Campus anti-Semitism is frequently cloaked in anti-Zionist sentiments with Israel demonized; an environment is created that makes Jewish supporters of Israel feel intimidated. 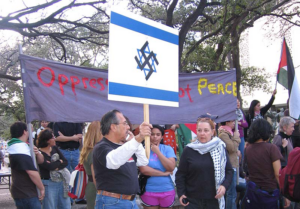 “Anti-Semitic harassment on college campuses aimed at pro-Israel students jumped by 70 percent in the past year, the highest levels ever seen, according to a new study showing that the endorsement of anti-Israel causes by students and professors has created an unsafe environment for Jewish students.” (Emphasis added)

Students for Justice in Palestine (SJP) and Jewish Voices for Peace (JVP) are active on many campuses, promoting BDS.

At Rutgers University, an article in the student newspaper, The Daily Targum, demonized Israel and encouraged students “to rise up” against Zionists:

“Zionism has been the foundation upon which systems of dispossession, ethnic cleansing and apartheid have been built… Now is not the time to back down in response to people who hold obsolete and oppressive ideologies [such as Zionism]. Now is the time to rise up, like humanity has never done before, and leave no one behind.” (Emphasis added, see all documentation at Amchainitiative.org.)

In addition to all of this, there has been an ugly spate of physical attacks on Jews in New York City and environs.  It is a pogrom in slow motion and growing in intensity: attacks first occasionally, then perhaps weekly, and now almost daily.

According to Eyewitness News there has been a 53% increase in anti-Semitic hate crimes in New York City over the course of this year.  See this video to get a sense of what is happening:

In New York, those being attacked are ultra-Orthodox or Haredi Jews, readily distinguishable because of their dress; their attackers are almost exclusively Black, as were the terrorists who perpetrated the Jersey City attack, and the terrorist with the machete in Monsey.

So what is going on?

Dov Hikind, former NY Assemblyman and founder of Americans Against Anti-Semitism, says “Anti-Semitism is out of control. What we see now is systematic day-in, day-out horrible things happening.” 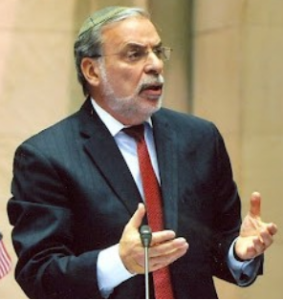 Hikind maintains – and I concur – that there has been an atmosphere in the United States of legitimizing anti-Semitic rhetoric:

“When we permit the Farrakhans of the world to get away with their hate, when we have a responsible [person] say about Farrakhan who is the vilest anti-Semite…when people say, ‘well, I disagree with the things he says, but he’s done a lot of good stuff,’ that’s a disaster.”

For the record, Louis Farrakhan has called Judaism a “gutter religion” and referred to Jews as “termites.” And that quote (probably an accurate paraphrase) was from co-chair of the Women’s March, Tamika Mallory; she refused to disavow her close relationship with Farrakhan, and actually called him “the greatest of all time” because of his positive effect on the Black community. She thus conferred upon him continued legitimacy and let it be known that his Jew hatred can be overlooked.

Hikind further claims that Sen. Bernie Sanders., I-Vt., and Reps. Rashida Tlaib, D-Mich., Ilhan Omar, D-Minn., and Alexandria Ocasio-Cortez, D-N.Y., have been complicit in anti-Semitism. We’re talking about the US Congress. Ilhan Omar has been blatant with such anti-Semitic tropes as her comment about “Benjamins.” What makes the picture worse, is that the Democratic-controlled House was remiss in not calling her out on this with clarity.  Rest assured, that reluctance did not go unnoticed in the broader community.

I don’t know if it originated with him, but Seth Frantzman of the JPost has used the very apt term “inconvenient anti-Semitism” to refer to anti-Semitism that it is not politically correct or politically expedient to identify. This would apply to the reluctance in Congress to criticize Omar– who is not only a woman of color, but a refugee from Somalia. And it certainly applies to reluctance to grapple with the very real problem of anti-Semitism within the Black American community.

White supremists and members of the KKK must be called out; their malign influence, where it exists, should not be ignored.  But their numbers and their effect on society are small compared to what is taking place on the left. While Donald Trump, for his part, is not careful: he has on occasion used language that could all too easily be misinterpreted. But I see no evidence that he is anti-Semitic. In fact, if we are going to speak about presidential attitudes, we might consider the readiness of Barack Obama, while a Senator, to pose in a picture with Farrakhan.  That was at a meeting of the Black Congressional Caucus 15 years ago.  Is it necessary to say more? 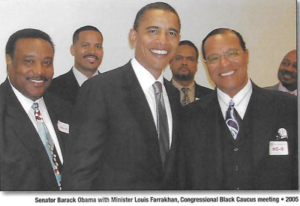 One of the things that is greatly disturbing about this situation is the weak response of the broader Jewish community.  I read about how Jews are “saddened” or “disturbed” by news of anti-Semitic attacks.  Saddened?  How about outraged, or furious?  How about Jews indicating that they simply will not tolerate this?

I fear that what we are seeing is a manifestation of a breakdown in the concept of Am Yisrael: a Jewish people, unified, standing one for all, with Jews acknowledging that they are responsible one for the other. I seriously doubt that the secular Jew, or Reform Jew, sees the ultra-Orthodox Jew as his brother.

According to a study done by the American Jewish Committee in October, almost one in three American Jews prefer not to wear anything that would identify them as Jewish, such as a kippah or a Star of David necklace.  They would hide their Jewish identity in order to be safe.  But what about those Jewish men with black hats or large black kippot, or Jewish women with their hair covered?  The Jews whose identity is out there? Is the secular or Reform Jew outraged about what happens to them?

In point of fact, Jews on the far left sometimes embrace a skewed perception of reality that diminishes the importance of what other Jews are dealing with:

The rabbi is calling for the Jewish community to end its “silence” about “the continued legacy of slavery.” Jews, so often “proudly on the front lines of social justice causes” must now awaken from their apathy about reparations.

“…we can now understand that [our grandparents, who had to overcome poverty and discrimination] and many of us also benefited from, and continue to benefit from, the same white privilege that allows for the continued discrimination against black Americans.” (Emphasis added)

This tone-deaf approach is jaw-dropping.  “White privilege” is a leftist buzz word applied to Jews as accusation, without accuracy.

That he should draw on this now, when anti-Semitism is on the rise, beggars comprehension.

My appeal, then, is for every Jew who gets it – and we see that tragically some do not – to stand up now in a display of unity and speak out.  All of America must understand that Jews will no longer tolerate the current situation.

Anti-Semitism must be called out, regardless of its source. There should be marches and demonstrations in large numbers, social media should be utilized vigorously and continuously to address the situation.  There should be expressions of Jewish pride and concern – coupled with a very clear message that what happens to one Jew is of concern to all.

There will be a Solidarity March this Sunday, at 11 A.M., entitled “No Hate, No Fear.” The March will begin at Foley Square in Lower Manhattan and will go across the Brooklyn Bridge to Columbus Park.

“Proud, united and strong.  We stand up and stand together.” 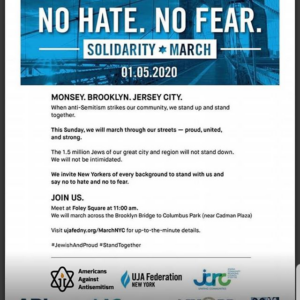 Jewish assertiveness should be expressed in a myriad of ways:  Jewish communal leaders who don’t act with strength – and many have not – should be replaced; public officials should be publicly held accountable to do the maximum.  Private “shmira” (patrol) groups to enhance safety on the streets should be formed. There are calls to bring back the Jewish Defense League: 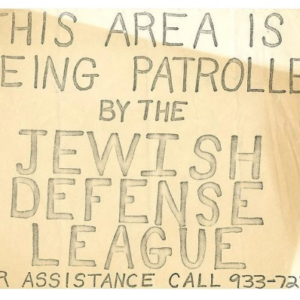 Legal firearms should be acquired and carried and self-defense methods should be taught broadly.  Those who would attack Jews must know that there will be repercussions. 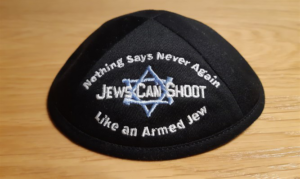 Instead of hiding, Jews must be visible in the most positive sense, standing proud and unapologetic.

And the message of Martin Luther King, who abhorred anti-Semitism, should be invoked. 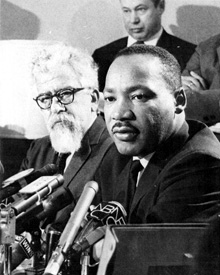 In this way, and countless others – drawing on shared values and shared experiences – can a rift with the Black community perhaps begin to mend.

A tall order?  Very!  But the situation cannot persist as it is. The turnaround must begin somewhere.

And who knows?  Perhaps in this time of difficulty, a sense of Jewish unity and Jewish pride can be recovered.