From Israel: Wait a Minute

Beginning with a housekeeping message: Unfortunately, the email address associated with my postings, arlene@arlenefromisrael.info went down last week because of a glitch.

While the email is functioning again, please know that all communication in my inbox has been lost.  If you responded to a recent post of mine, and believe that response to be important, or were posing a question, please, feel free to send again.

In certain places in the world, weather changes so swiftly that it’s not uncommon to hear the comment, “Don’t like the weather? Wait a minute…”

That is how certain events pertaining to Israel seem now:  Don’t like the news?  No problem.  It will probably change momentarily. Keeping track is difficult.

When last I wrote, Vice President Pence had suggested in a speech that the US embassy might be moved to Jerusalem very soon.  Apparently leaks suggesting the same followed this, and in short order it was making major news here in Israel that the embassy was going to be moved.

From the White House, however, came a swift message telling us that this assumption was premature.

Ah, but then information surfaced regarding an alternate plan: to recognize Jerusalem (or western Jerusalem) as part of Israel without moving the embassy. I have information on this that confirms Washington is giving this alternate approach serious consideration.

Some news sources suggest that this is a “weaker” stance than actually moving the embassy.  But this is not the case:  the whole point of having the US embassy in Jerusalem would be because Jerusalem had been recognized as being part of Israel – otherwise it makes no sense. The ikar, the heart of the matter, is recognizing Israeli Jerusalem.  Reports do not make clear whether ALL of Jerusalem would be so recognized or just “western” Jerusalem.

But yesterday, Jared Kushner was interviewed by Haim Saban at the Saban Forum in Washington and indicated that Trump was “still looking at the issues” and had not yet made a decision about the embassy.

You can see his interview, regarding his work on the “peace process” here. 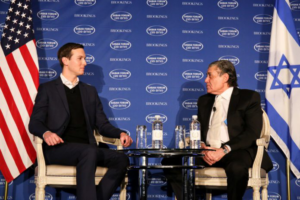 As would be fully expected, officials of the Palestinian Authority/PLO and leaders in Arab states have reacted with hostility to the possibility of US recognition of Jewish Jerusalem.

A Palestinian Authority delegation in Washington has warned the Trump administration that any recognition of Jerusalem as belonging to Israel will halt the “peace process.”  Abbas himself has reached out to leaders in Turkey, Saudi Arabia, Qatar, France, Egypt, Tunisia, Jordan and Kuwait, asking them to intervene with Trump to prevent moving the embassy or declaring Jerusalem Israeli.

Jordan and the Arab League have warned of the potential for violence.  Turkey has warned of a “major catastrophe.”

Threats aside, many analysts believe that a change in US policy on Jerusalem would evince a brief barrage of angry verbal protests and little more. For many of the Arab nations (this is not true of the Turks), self-interest lies first with not crossing Trump in the face-down with Iran, not with worrying about a Palestinian state with Jerusalem as its capital.

And so, hang in there, folks.  Sources indicate that Trump will be making key decisions by Wednesday.

With regard to the Palestinian Authority (Fatah), I note here that, as expected, the unity agreement with Hamas is not going well.  The PA was scheduled to fully assume administrative responsibility for Gaza on December 1, but this has not occurred.

The PA says it is impossible because they have not been permitted to take charge of security (read: Hamas will not surrender its arsenal of weapons).  Hamas wants to know what their problem is, because control of the crossings has been turned over to the PA.  Hamas counter-charges that the PA is still not releasing funds as had been agreed when the deal was signed, for such services as electricity (read: Fatah is holding this over their heads as a bargaining chip).

But wait!  There IS something the PA and Hamas agree upon: a “day of rage” because of what Trump may be deciding with regard to Jerusalem.  It has been announced.

I regret that it has taken me time to write about the issue of PA textbooks, but a new Algemeiner article provides an excellent opportunity for me to do so.

Last year, the PA instituted a “full reform” of its textbooks, grades 1 – 11.  Recently, the Institute for Monitoring Peace and Cultural Tolerance in School Education (IMPACT-se) did a review of the new textbooks released the PA for this academic year.

Findings were that the textbooks are “significantly more radical” than their predecessors. The texts “groom young Palestinians to sacrifice themselves to martyrdom,” promote the idea of a mass “return” to Israel, and “feature a radical Islamist…worldview.” Israeli land is often identified as “Palestinian.”

In September, a similar study was done by Dr. Arnon Groiss — whose report was published in cooperation with the Simon Wiesenthal Center, Center for Near East Policy Research and Middle East Forum.  The findings of the IMPACT-se study now echo Dr. Groiss’s earlier findings.

“Based on what is now being taught, for the next generation of Palestinian kids, there is no Israel, it doesn’t exist.  There’s absolutely nothing in these books that sets the stage for any breakthrough that would bring true peace between the two peoples.”

Those who expect peace to breakout any moment now are forewarned.

When does it end?

On Thursday, 19 year old soldier Ron Yitzhak Kukia was knifed to death by a terrorist near a mall in Arad, in southern Israel. 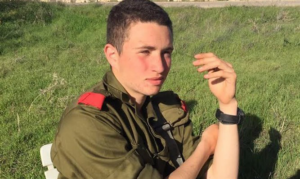 Again, the grief of a loving family and fellow soldiers.

The terrorist had escaped. Today there are reports of two suspects from the Negev in custody, one of whom has implicated himself.

On the very same day, there was another incident.  Infuriating, terrifying, it ended better than it might have.

A group of some 25 young people, having celebrated the bar mitzvah of one of them, went off to do a hike in the Shomron (Samaria), leaving from the Jewish community of Migdalim.  It had been approved by the IDF and the youngsters were accompanied by two adult guards – fathers of participants – who carried guns.

Suddenly they were accosted by a lynch mob consisting of dozens – one estimate placed the number at 100 – of Arabs from the nearby village of Qusra, who began pelting them with rocks.  The group managed to take shelter in a cave.

One of the fathers had his gun grabbed from him.  The other father shot, wounding one Arab and killing another, a local Palestinian Arab farmer who was participating in the mob.

The IDF was called to the scene and rescued the Jews from the cave.

There were clashes between Jews and Arabs in Qusra following this incident. The Arab version of events is that the member of the village who was shot dead was an innocent man working in his field, when a Jewish “settler” shot him dead.  A mob then descended upon the young people in response to this murder of an innocent.

Questions are being raised in the Jewish community regarding the alleged need to “investigate” why the guard found it necessary to shoot.  This is a sensitive issue because Jews are often put on the defensive for using force to protect themselves against Arab threats, and in some instances hesitate to use their weapons for fear of being charged with assault or manslaughter, sometimes with regrettable results.  In this case, the guards were held on suspicion of negligent manslaughter and then released.

“…the use of a weapon for self-defense is a moral value that is defended by every democracy.

“My thanks and recognition to the armed escort who saved the hikers from a clear and present danger to their lives.”