From Israel: “Trudging Through Tough Times!!”

Oh, and these are tough times.

But Purim begins Monday night (and a day later in Jerusalem, where Shushan Purim is celebrated).  And so, today children went to school in their Purim costumes, and I happened to be running an errand when they were coming out of school.

All those happy faces! All those creative costumes! I watched them and felt a lightness in my heart I hadn’t felt in days: They are our future and our hope.

Purim tells the story of how the Jews of Persia were saved through the hidden hand of the Almighty.  So now we must pray that Hashem will save us again from the ugliness we are dealing with these days.  It’s a different kind of risk, an internal risk, but a risk none the less.

To all celebrating, I extend a heartfelt wish for a Purim Sameach!  Be glad, and stand strong. 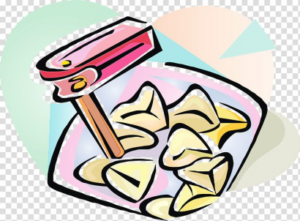 The ugliness I refer to is political in nature.  Since I last wrote, it has, if anything, exacerbated here in Israel (I cannot address the parallel political ugliness in the US now – though I likely will in time).

We are still in flux, without resolution.  What I simply wanted to do here is touch on a few basics of the situation as it is unfolding: to clarify, where clarification is possible.  I will not be writing again until after Purim.

As close as we came, the right wing bloc apparently did not achieve the 61 mandates needed to form a governing coalition. That much I made clear last time. Although I mention here that the Likud is seeking a full recount.

But the fact that the right wing bloc did not win does not mean that the center-left bloc did. The numbers make it obvious: 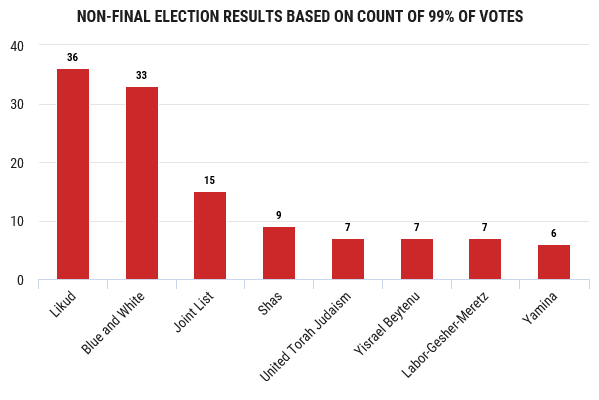 Blue & White with Labor-Gesher-Meretz is only 40 mandates.  Even if Leiberman’s Yisrael Beitenu joins them (I’m coming to that), it is 47, far removed from what is necessary.

Clearly, clearly the will of the electorate is to the right of this.

And yet Gantz is crowing about a “victory.” 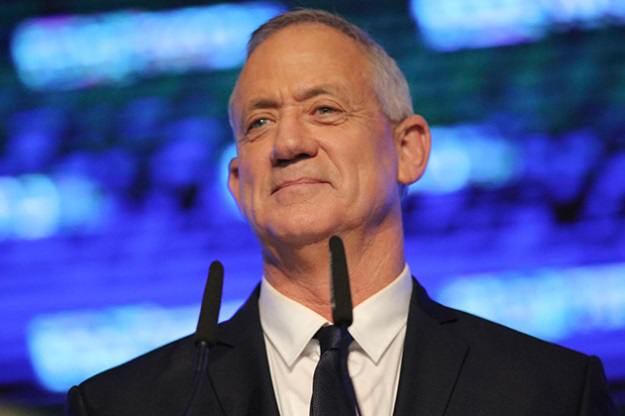 The only way for Gantz and company to achieve control is via involvement of the Arab parties of the Joint List.

There are two ways for this to happen: Either via the Joint List overtly joining a coalition or by supporting a minority coalition from the opposition (by not blocking the operation of the coalition and not trying to bring the government down).

It is the latter possibility that is now apparently under discussion.

And I take a moment here to clarify why all of this is horrendous.  There are those who charge that opposing active involvement by the Arabs is racist. But this is not the case!

Opposition to them is not based on the fact that they are not Jews.  We have had a number of Druze serving in the Knesset representing different parties, including Likud. Ayoob Kara, served in a couple of ministerial positions within the Likud, and was heard to say, “I am more Zionist than the Jews.”  And that is the point here.  The Druze are loyal to Israel as a Jewish state.

The major portion of the Joint List, by contrast, is anti-Zionist and seeking to replace Israel as a Jewish state with an Israel that is “for all its citizens,” meaning the Jewish character of the state would be no more. Time and time again, members of the Joint List parties have supported our enemies.

Joint List chair Ayman Odeh is on record as having praised head of Hezbollah Hassan Nasrallah, saying he “presented a unique resistance model.” Said Odeh, Nasrallah was “the head of the movement against the Israeli occupation and who defeated it in 2000 and proved himself an example of professionalism and sacrifice in 2006.” 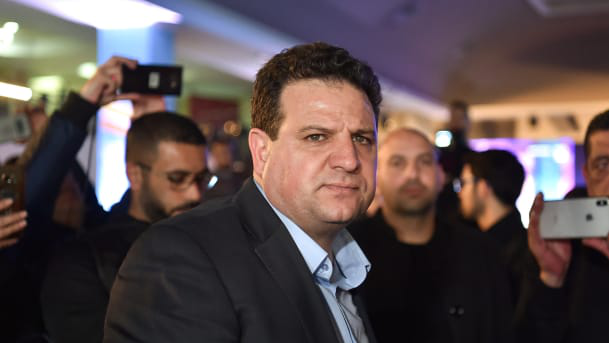 And Ahmed Tibi?  We must not ever forget that he was an advisor to the terrorist Arafat and undoubtedly was involved in supporting or advising on terrorism and related acts intended to weaken Israel.

In 2011, when he was already a member of the Knesset, Tibi spoke at a memorial for Arafat in Ramallah, and accompanied Abbas to the UN to submit a bid for Palestinian statehood. 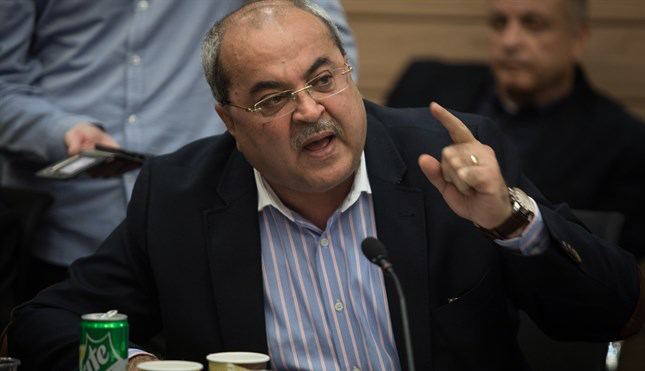 It is to the everlasting shame of Gantz and company that they may be prepared to involve themselves with the United List, even passively, in order to bring a defeat to Bibi.  But as I write Gantz is bragging about the fact that Netanyahu has lost and he is already forming his “government.” He says the details, which are sensitive, cannot yet be revealed.

It will be a “stable” government, he declares.

But you can rest assured that the Arabs will have their price for helping Gantz.   No application of sovereignty in Judea and Samaria, no attacks on Gaza. They have already stipulated this and more, involving, for example, lifting of regulations against illegal building (which I will return to as relevant).

And now the prime minister is saying, See! Did I not warn about this? 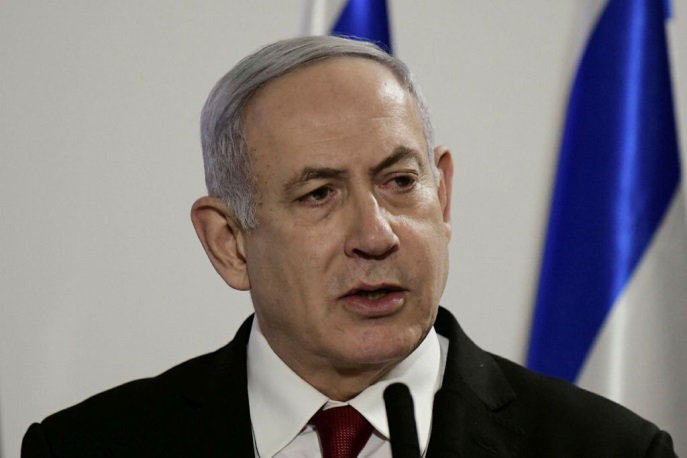 Indeed he did.  But people thought he was exaggerating.

All of this is still only talk.  Lieberman is declaring that he hates Netanyahu with such a passion that even on Yom Kippur he would not forgive him.  His problem now?  Apparently there was some information leaked about possible improprieties with regard to taxes or other related issues concerning his family that prompted the opening of an investigation recently.  Lieberman insists this was vengeance instigated directly by Netanyahu; Netanyahu is not only vehemently denying that this is the case, he is prepared to sue the media source that claimed it was.

Lieberman, who had always insisted that he would not work with the Arabs is now indicating his inclination to support Gantz with this particular formulation.  He may think better of it before this becomes reality.

Or perhaps Moshe Ya’alon, who represents the most right-leaning faction of Blue & White, will be too repulsed by this scenario to go ahead. Uri Heitner, who was a major supporter of Ya’alon when he formed his Telem party, has now written: “Bogie Ya’alon announced that he is ready for a minority government supported from the outside by the Joint anti-Israel Arab List, this is a violation of his promise to the voter.” (Emphasis added)

“Today, I tell Bogie Ya’alon that if I have to choose between my loyalty to him and my loyalty to our path, I remain loyal to the path. If Bogie veered from the path – I’m not with him.” 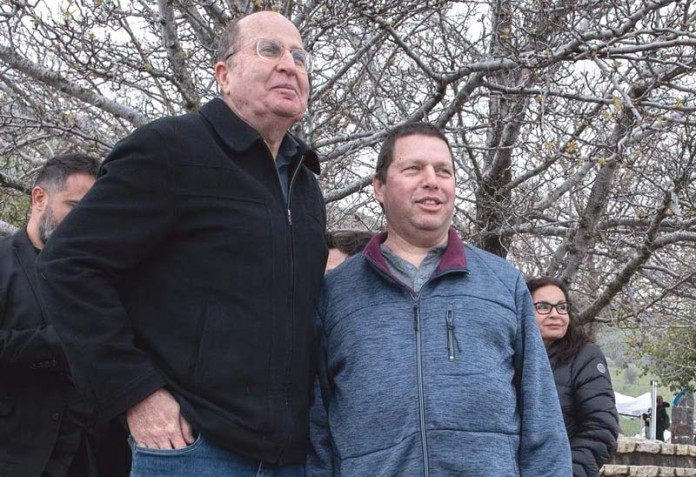 At this moment in time, readiness to take Bibi down seems to take precedence over other considerations.

Yet Bibi is determined not to go down so fast.

And as for me, my friends, it grieves me to contemplate this scenario, and grieves me again to write about it.

On a brighter side, there are those in the Likud who see something good coming from this and refuse to be overwhelmed by the current situation (emphasis added):

“Let Gantz attempt to govern through his minority government, wholly reliant on keeping both the Arab parties and the right-wingers of Telem and Yisrael Beytenu all rowing in the same direction, this faction in Likud is now arguing. Let Gantz try to pass budgets, assign ministries, fight a bout with Hamas in Gaza and survive a no-confidence vote, all while satisfying the diametrically opposed agendas of his erstwhile allies.

“And when he fails, when the underlying claim at the heart of Blue and White — that it is a viable and stable alternative to Likud rule — is revealed as the mirage that it is, Likud will be there, swooping in on a not-too-distant election day to reclaim the throne for another decade of unassailable political dominance.”

There is likely much truth to this scenario, as Gantz does not have a solid party with a meaningful platform and unified perspective. He has a diverse group that is interested only in dumping Bibi.

Bibi, for his part, intends to do all he can to drive wedges between these various components of Gantz’s group.  And what is certain is that Gantz is no match for Bibi.

The only concern is how much damage this group might do in a short interval before they fall apart.

But that’s jumping ahead.  President Rivlin must still meet with all factions and ask whom each one would support. From that starting point, he is supposed to make his decision as to who gets the mandate to form a coalition first.

As to the legislation that Gantz is threatening to advance to prevent an indicted Netanyahu from continuing in his position (apparently a major goal of that minority coalition he hopes to form), there are doubts being raised as to whether this would ever go through.

It has been pointed out by the Legal Forum for Israel that among the flaws of this legislation would be the fact that it would put inappropriate power in the hands of the Attorney General: he might find a reason for indicting a prime minister as a means of eliminating him or her from the political scene.