From Israel: Riding the Waves 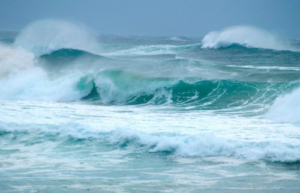 When I was a kid (a million years ago), I loved to ride the waves.  I would move out to meet an incoming wave and coast up on its front surface to its foaming crest, an exhilarating experience.  I would then drop down its back surface as the wave broke forward.  Doing this, I never got smacked by the force of the wave.

Today, this suddenly seemed to me an apt metaphor for what we deal with day in and day out: There are situations that are ugly: low points.  But there are also crests that we can ride. The trick is to navigate between the two.

There has been some alarm about the fact that the PA’s Mahmoud Abbas will be meeting with President Trump in the White House on May 3; Abbas was invited in the course of a phone call Trump placed to Abbas last week.

In many quarters there is the feeling that Abbas, who incites violence and pays salaries to convicted terrorists in Israeli prisons, does not merit the courtesy of such an invitation.  As well, there is concern that this may indicate a sort of even-handedness on Trump’s part that does not augur well for Israel – a worry that, “here we go again” with regard to being pressed on a “two state solution.”

While I am not thrilled by the invite to Abbas, neither am I unduly concerned.  At a bare minimum I have a wait-and-see attitude.

A careful look at the statement by Trump’s press secretary, Sean Spicer, when announcing the visit, helps explain why:

“They will use the visit to reaffirm the commitment of both the United States and the Palestinian leadership to pursuing and ultimately concluding a conflict-ending settlement between the Palestinians and Israel.” (Emphasis added) 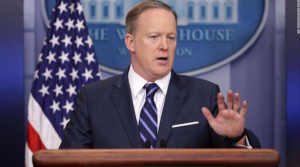 Observe that the term “two state solution” does not appear. That, my friends, is most assuredly not an accident.

We do not know what the president expects, nor do we know how he will press Abbas.  For years, I’ve been writing about the need for someone in the international community to hold Abbas’s feet to the fire.  It is possible that Trump is the man to do it.

I found the term “conflict-ending” to be interesting, as well, because what Abbas will never do is formally end the Palestinian Arab conflict with Israel. He’d be dead in the blink of an eye if he signed off on that. Literally.

It was reported just yesterday that (emphasis added):

“As Abbas and his advisors prepare for the May 3 meeting with Trump, thousands of Palestinians gathered in Ramallah to call on Arab armies to ‘liberate Palestine, from the (Jordan) river to the (Mediterranean) sea.’ The Palestinians also called for replacing Israel with an Islamic Caliphate.”

Then we have a number of news items that indicate that Trump just might have Israel’s back:

At a Security Council meeting on April 20, US Ambassador to the UN, Nikki Haley, who is serving as president of the Council for the month, made the following statement. It reflects a position she has taken repeatedly now:

“Every month the Security Council convenes a meeting on the Middle East…this debate is our opportunity to talk about the Middle East as a whole. Regrettably, these monthly meetings routinely turn into Israel-bashing sessions…It’s a formula that is absurdly biased against one country. It’s a formula that is painfully narrow in its description of the conflicts in the region.” (Emphasis added) 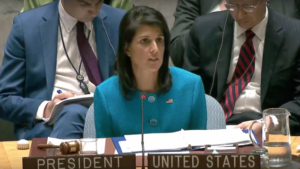 On the same day, Secretary of State Rex Tillerson included the following in a statement about Iran delivered from the State Department (emphasis added):

“Iran is the world’s leading state sponsor of terrorism and is responsible for intensifying multiple conflicts and undermining US interests in countries such as Syria, Yemen, Iraq and Lebanon, and continuing to support attacks against Israel.  Iran maintains a longstanding hostility towards Israel, providing weapons, training, and funding to Hamas and other Palestinian terrorist organizations.” 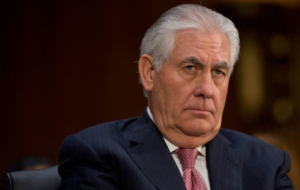 Last October, UNESCO passed a resolution denying that Jews or Christians had any connection to the holy sites in Jerusalem.  Donald Trump, who was not yet president, castigated this action.

Now UNESCO is set for an encore: Next Monday there will be a vote on a resolution that denies Jews have any connection to the Machpela, the Tomb of the Patriarchs (pictured), in Hevron, or to Rachel’s Tomb (Kever Rachel) in Bethlehem. 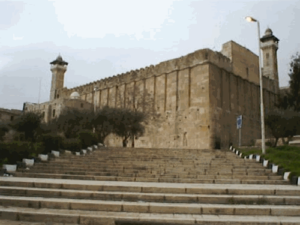 “The Trump administration has reportedly ordered US ambassadors in UNESCO member states to initiate meetings with their host countries’ foreign ministries in a bid to defeat” this anti-Israel resolution.

Then, likely the best news of all, announced on Wednesday:

President Trump will be coming to Israel in late May, and will be staying over one night.

Unofficial sources now suggest that the president will be arriving on May 22nd.  David Friedman, the new US Ambassador to Israel, is due to arrive the week before.

On the eve of May 23rd and May 24th, Yom Yerushalayim (Jerusalem Day) will be joyously celebrated here in Israel, marking 50 years of the reunification of Jerusalem. 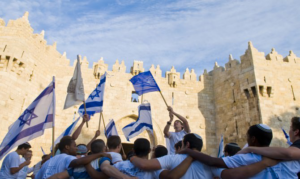 While nothing has been announced officially, it would be difficult not to attribute some very pro-Israel motives to the timing of the visit.

Actually, several rumors have come to me.  Some are very dire in their prediction of what the president will be doing here to “kick off a peace process,” after having met with Abbas.

But I have also heard some informed speculation – which seems more plausible to me in light of all of the above – that is extremely positive. Would the president come as we are about to celebrate the reunification of Jerusalem if he did not himself endorse a united Jerusalem?

In due course we will know.

The advance team from the Trump administration arrived here today to begin making arrangements for the visit.

There is a great deal more to write about, which is why I will be posting again soon.