Events have moved along with such speed in the last two days that it has been difficult to keep my head from spinning.

However, it is not just difficult, it is impossible, to track these events without feeling pain. Distress. Anger.

Before I go into Shabbat I feel it is essential to provide an update on this on-going situation. We are hardly done yet.

By Tuesday night, not only had the metal detectors that had been placed at the gates to the Temple Mount been taken down, so had the cameras.

In spite of this, on Wednesday, the PA and the Waqf were declaring the situation was not satisfactory, and they would still refuse to go up on the Temple Mount, would still foment “protests,” with another day of rage to come on Friday (which is today).

Then, yesterday morning, they announced that it was “OK” to go up on the Mount. Briefly, I was bewildered as to what had caused the shift. Then, when I found my answer, I was no longer bewildered, I was heartsick.

The demand was that things go back to the way they had been before the metal detectors went up on July 14. But – shock and horror! – scaffolding that the cameras had been mounted on was still standing at the gates. When the scaffolding had been removed, the situation was declared “clean.”

This is it? This is where we are? To be so “super accommodating” to the demands of those who are rioting and the leaders who incite them?

For me to even write this is difficult.

There was celebrating in the Arab street because they had “won.” They had bested Israel with their demands. 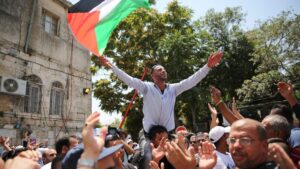 So, I thought, they will go up to the Mount with their rejoicing, and we will have a respite, a short period of quiet. Undoubtedly these concessions had taught them lessons – regarding the fact that violence against us works – that would come back to haunt us big time. But for a bit, it would be quiet.

I was wrong. Immediately below you see a picture taken on the Temple Mount yesterday. They went up to their place of sanctity, the place that is sacred to them – or so they tell the world – and they rioted, attacking Israeli police. 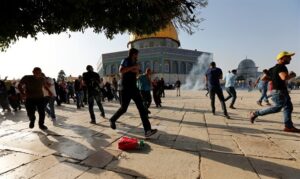 A group of Arab hooligans who had barricaded themselves in the Al Aqsa Mosque overnight were removed by police. Rioters displayed a Palestinian flag on top of the Mosque. No flags are permitted on the Mount and police pulled it down.

Today Israeli security forces are attempting to control the situation. Only women and men over 50 are being permitted to go up on the Mount. Those young men who cannot go up are praying in the streets near the Mount and the situation is tense across eastern Jerusalem and beyond.

There was rioting in the Jerusalem neighborhood of Wadi Joz, with security forces quickly responding with stun guns. Mobs attacked Israeli troops in Hevron and Beit Lechem as well.

The obvious first lesson to be learned from this is that in dealing with the Arab Muslim world, displays of weakness invite violence.

What appears to Western eyes to be conciliation is to Arab Muslim eyes a sign of weakness and an invitation to be more violent. How could our government have failed to internalize this by now?? Give them your hand and they’ll rip your arm off. And after the arm is off, they’ll come for the body.

That is what we are seeing. Every demand is followed by yet another. At this point I would guess that they are “offended” by the presence of Israeli police on and near the Mount, because it is “theirs.”

Please see this important article by David Weinberg, “What Status Quo on the Temple Mount?” The Arabs are screaming about return to the “status quo,” but Weinberg demonstrates that the status quo that once stood has been violated time and again by radical Muslims who turned what was supposed to be a place of prayer into a place of violent confrontation. They have “conducted vast and illegal construction projects on the Mount and beneath it, willfully destroying centuries of Jewish archaeological treasures.”

I will be returning to the huge issue of rights and status quo on the Temple Mount.

But there is even more to the story than this.

A key element of what is happening is the incitement. These mobs are not spontaneously rioting. They have been spurred on, taught to believe that Allah approves, and that they are being dishonored by the Jewish presence.

My information is that Fatah is a key instigator in the violence. Fatah, the party of Mahmoud Abbas.

This too requires a more detailed analysis than is possible immediately prior to Shabbat. There are issues of internal Palestinian Arab dissension, and a fight between Jordan and the PA for control of the Waqf. Abbas, at the moment, is feeling isolated and threatened, especially as Hamas is embracing Mohammad Dahlan, his hated rival. Erdogan of Turkey has been stirring the pot, as well. A new intifada serves the purposes of these people. A way to garner respect in the Muslim world is via challenging or besting Israel. And Temple Mount issues are helpful in fomenting unrest because then the political goals are couched in volatile religious terms.

King Abdullah of Jordan is most definitely among those fomenting trouble. I hear again and again about how Israel and the US “need” Abdullah, as jihadists would assume control if he were knocked off his throne. I am reminded in discussions about the “value” of Jordan to Israel and the agreements we have with the Jordanians.

But I’ve never observed that Abdullah sees this as a two-way street: that he understands the need to temper his words because he also needs Israel, big-time. He attacks us every chance he gets. There is no balance at all in his public position.

The next lesson, which should have been learned a very long time ago, is that Israel has no partner for peace.

Forgive my lack of diplomacy when I describe my response to the words of Trump’s envoy Jason Greenblatt, who is here now. He leaned hard on Netanyahu to take down those metal detectors in order to “calm” matters i.e., he is complicit in the weakening of our government.

After it was done, he praised Israel for this action and spoke about how we need to quiet things down so we can get back to the business of pursuing peace. That made me want to gag.

There is no indication at all that he has even an inkling of the fact that we cannot deal with Abbas. If he knows, he doesn’t care and will pursue matters anyway, which is even worse.

In the end, I cannot change Greenblatt, or Trump, or Jared Kushner (to whom I am NOT related).

I want to see our own prime minister stand up and say:

JUST A COTTON-PICKING MINUTE. WE WILL NOT, CANNOT, MUST NOT MAKE DEALS WITH THESE PEOPLE. WE MUST FIRST DEFEAT THEM.

As Shabbat comes closer, I can dream about this, and pray for it.

May the Almighty grant strength to the People of Israel.

What I ask each of you, once again, is to share this, and tell the truth in every possible venue.