The father of six, the youngest only eight months old, the eldest aged 10.  A rabbi, a mohel (ritual circumciser) and a volunteer paramedic first responder with Magen David Adom.

This was Raziel Shevach, age 35.  He was murdered by Palestinian Arab terrorists on Tuesday night, in a drive-by shooting on Rte. 60, outside Havat Gilad in the Shomron. 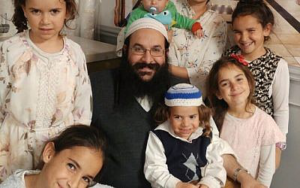 A good man, a sterling man from all accounts.  Gone because of an act of hatred.  Of course this is an obscenity.
~~~~~~~~~~
Havat Gilad was established in 2002 in memory of Gilad Zar, security coordinator of the Shomron Regional Council, who was killed in a terror attack.

It is there that Rabbi Shevach was buried today.  His wife, Yael, explained that he had told her if anything ever happened to him, he wanted to be buried in this place that he loved. 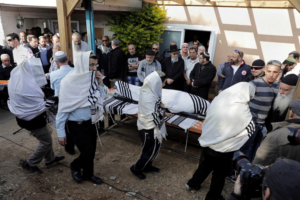 Many hundreds attended his funeral.

Minister of Agriculture Uri Ariel (Habayit Hayehudi) told those gathered that: “There is no one that can stop the redemption of the people of Israel.” He could not be more correct.  In the face of adversity, we are strong.
~~~~~~~~~~
When Education Minister Naftali Bennett (Habayit Hayehudi chair) came forward to speak, he called for cessation of all payments to families of terrorists.

Then he called for Havat Gilad to be fully authorized as a mainstream community in Israel.  (The houses in this community were built without permits: already this morning Defense Minister Avigdor Lieberman, Yisrael Beitenu chair,was speaking about action to accomplish full authorization.)

Before Bennett could continue, cries went up from the gathered crowd: “Revenge!  Revenge!”  The voices gained volume until they constituted a unified angry shout.

Bennett stopped his talk, and instead told the crowd:

You can see it all here:

He then returned to the microphone for one additional moment, to caution that no private weapons should be utilized in revenge: all actions must be taken by the IDF or the government.

Vigilant actions against Arabs would be a very serious mistake.  Yet I sense a shift in the national mood.  We are beyond weary of having to cry “Again?!” and then “Again?!” each time the news breaks of an innocent Jewish life taken by an Arab terrorist.
~~~~~~~~~~
I pray that the government will be strong in taking all possible actions.

Last night, head of the Shomron Regional Council, Yossi Dagan, called on the government to approve the necessary security measures to protect the residents of Judea and Samaria.
~~~~~~~~~~
And with all the talk about stopping payments to terrorists in prison and their families, more must be done.

Just yesterday, Minister Lieberman reported to the Knesset Foreign Affairs and Defense Committee that the Palestinian Authority paid terrorists and their families over $347 million last year, according to its own records.

The PA pays terrorists who are sentenced to three to five years in prison $580 per month, which is an average Palestinian salary.  Terrorists sentenced to 20 years or more (which means their terrorist crimes were more severe), receive five times that amount for the rest of their lives. There are bonuses—for being an Israeli citizen, or being married, or having children.

http://www.jpost.com/Arab-Israeli-Conflict/Palestinian-Authority-paid-terrorists-nearly-350-million-in-2017-533227
~~~~~~~~~~
Lieberman is promoting legislation—based on a proposal by MK Elazar Stern (Yesh Atid) —to deduct the amount that the PA pays terrorists and their families from taxes and tariffs Israel collects for the PA.Said Lieberman (emphasis added):

“The PA pays over a billion shekels a year to terrorists and their families, thus encouraging and perpetuating terrorism.

“The minute the amount of the payment is decided according to the severity of the crime and the length of the sentence – in other words, whoever murders and is sentenced to life in prison gets much more – that is funding terrorist attacks against Israeli citizens. There is nothing that better illustrates the PA’s support for terrorism. We must stop this.”

May this go through without getting watered down because of political considerations!
~~~~~~~~~~
This was the comment today by US Ambassador to Israel David Friedman (emphasis added):

“An Israeli father of six was killed last night in cold blood by Palestinian terrorists. Hamas praises the killers and PA laws will provide them financial rewards.

“Look no further to why there is no peace. Praying for the bereaved Shevach family.”

And I say, bless David Friedman. 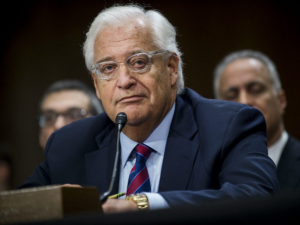 Yes, certainly Hamas praised the attack.  But Palestinian Media Watch reports that Fatah did as well.  On the official Fatah Facebook today was this:

“The Nablus operation in numbers:

“The full duration of the operation: 30 seconds

“The distance between the cars: 20 meters

“The number of bullets that were fired: 22

“The one who carried out the operation was skilled and experienced, and escaped the site

“The result: a killed settler”

What I want to know is how Fatah knew how many bullets were fired, or what the distance between the cars was.
~~~~~~~~~~
As I write, the perpetrators have not yet been caught.  But I know the IDF will get them.

I had no intention of posting today, but recognized soon enough that I had to.  I ask, please, that you share this information broadly.

There is much else I want to write about, but it will wait until my next posting. There will, as well, likely be follow-up on some of the issues raised here.
~~~~~~~~~~
© Arlene Kushner. This material is produced by independent journalist Arlene Kushner. Permission is granted for it to be reproduced only with proper attribution.