I had not planned to post again so soon, but when a crisis arises, there is no time to delay.  I write now to inform my readers of the realities on the ground.  I ask that you, in turn, share this in order to inform others.

The situation that I describe below is unfolding from moment to moment: Thus, certain particulars may have changed by the time you read this. But the precipitating and underlying factors stand.

At about dawn today, Tuesday, November 12, Israel succeeded in taking out Baha Abu al-Ata, commander of Islamic Jihad’s Al Quds Brigade for northern Gaza (pictured to the right below). 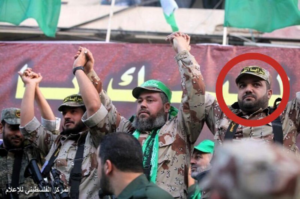 “It can be assumed that the Gaza-ruling Hamas is not looking for an escalation of violence, though it appears fellow terror group Islamic Jihad is doing everything possible to set the area ablaze, with Hamas standing by and allowing it to do so for fear of public criticism were it to intervene.

“Some in Israel have been quick to attribute the unruliness of Islamic Jihad in recent months to Iran’s influence over the organization. Such influence is indeed long-standing and ongoing — but the situation is more complicated, involving a number of personal and political motives, and not necessarily ‘commands’ from Tehran…

“The growing trend of escalation by Islamic Jihad is being led by the figure thought to be the head of its military wing in northern Gaza, Baha Abu al-Ata.

“Al-Ata is a serious troublemaker in Gaza who no one wants to confront. That includes Hamas leaders Ismail Haniyeh and Yahya Sinwar, who fear him and the possibility of being accused of collaboration if they act against him.

“Even Ziad al-Nakhala, Islamic Jihad’s leader, hasn’t succeeded in dealing with al-Ata, who is acting from a clear personal and organizational agenda.

“Al-Ata holds a particularly extreme stance against Israel and opposes the current ceasefire between it and Gaza-based terror groups.”

Hamas’s Yahya Sinwar is one tough, nasty guy.  That he should have feared Al-Ata tells us a great deal.  Clearly, Al-Ata was a man who had to be eliminated. 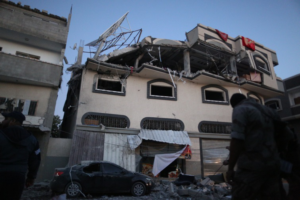 Israeli Intelligence had been tracking him for some time.  It had become his practice to surround himself with children to prevent attack upon his person, i.e. he knew that we would not target him while children were in range.  Then information was acquired regarding a building in Shejaiyah, outside of Gaza city, where he was alone with his wife and could be reached.  So, in a pinpoint strike, we did just that.  Just the room where he was sleeping was hit (to avoid injury to civilians in the building):

This is the first point to be made: the timing of the attack had to do with the opportunity to get someone who badly needed to be got. It was NOT politically motivated, as some are suggesting.

President Ruby Rivlin made his position clear in a statement that was released (emphasis added):

We stand behind the security forces, who have been working for the success of this morning’s operations for a long time. I know that they, and the Israeli government that approved the operation, have Israel’s security, and only that in their minds.

“This is no time for political squabbles, and those who [engage in them] bring no credit to themselves. It is time to stop this immediately.”

Those making charges of political expediency were from Labor, not Blue and White. Gantz, to his credit, voiced support, saying the security of Israel came before politics. He had been updated before the action was taken, and called it “the right decision.”

The announcement of this assassination by the prime minister’s office made clear that Al-Ata was planning imminent attacks.  There was every reason, then, to act with alacrity when the opportunity presented itself.

Said Chief of Staff Aviv Kohavi, “In recent days he was working to perpetrate attacks against Israel. We tried to thwart his efforts in different ways without success and we then recommended a targeted killing.”

What also should be noted is that this was not an operation on which our new Minister of Defense, Naftali Bennett, had signed off.  One analyst, who undoubtedly considered his observation to be cutting edge, sniffed that no sooner had Bennett taken on his position than this happened. But he was wrong:

Bennett had been approved by the Cabinet, but he was not sworn in officially until 11:00 AM today, some five hours after the assassination had taken place.  Ultimately, it was Netanyahu who signed off on this, in his position as Prime Minister and Defense Minister. The action, said the statement from the prime minister’s office, had been recommended by the IDF Chief-of-Staff and ISA (Shin Bet) Director and approved by the Security Cabinet.

The IDF stated that this was a one-time action and did not indicate a return to a policy of targeted assassinations. But I suspect that it will have a deterrent effect on Hamas leaders, none-the-less: When they start looking over their shoulders, they have much less time to plan attacks. Former Chief of Staff Gabi Ashkenazi, also of Blue and White, observed that “Israel sent an important message last night that every terrorist is within its reach, and his life is in danger.”

What ensued after the assassination is precisely what we would have expected – what, in fact, the IDF warned us to expect:  The launching of rockets by Islamic Jihad, likely to continue for several days.

Islamic Jihad Secretary-General Ziad al Nakhaleh, who is based in Lebanon, said that the assassination “crossed all redlines…We are going to war.” ‬‬

As I write, the better part of 200 rockets and missiles have been launched from Gaza; roughly 50% of the projectiles hit empty fields, and of the remaining rockets, 90% were taken out by Iron Dome. The Gaza envelope and the area up to Tel Aviv are on high alert. 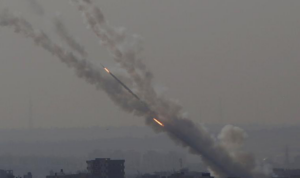 Schools were closed today in the areas being targeted, as were many places of work. People are being advised to stay close to shelters.

Some 40 people have received medical treatment, but I do not believe there were any serious injuries, and there were, thankfully, no fatalities.  There were injuries from shrapnel, and treatment required for shock.  The latter should not be taken lightly: an eight-year-old girl was so panicked she developed a serious heart arrhythmia and required hospitalization. Injuries were incurred by people dashing towards shelters and falling. A mattress factory was hit and went up in flames; one house took a direct hit.

Needless to say, Israel has retaliated, hitting Islamic Jihad terror sites inside of Gaza. At this point, three terrorists have been killed.

At the moment, rocket fire is sporadic, and Egypt is attempting to quiet the situation. But Islamic Jihad is saying the worst is yet to come.

I will close with this note, from an analysis by Raoul Wootliff:

“By design or not, Gaza escalation increases chances of a unity government. (Emphasis added)

“Benny Gantz claims nothing has changed, but he knows an operation limits his options and bolsters Netanyahu, while putting a nail in the coffin of plan B, Arab-backed minority government.”

An interesting and pertinent read:

Gantz is apparently being kept in the loop.