How heartening to see a leader make a bold decision that improves the state of the world.

My friends, I spent hours on Wednesday attempting to find the most effective words to convey my thoughts on President Trump’s decision to take out Soleimani.

There are, I wanted to say, those who embrace the notion that the path of appeasement is the way to temper Iran’s aggression.  These are people – some in high level positions – who continue to fear that with his bold decision the president put the US and Israel at greater risk.

I most strenuously disagree with this thinking, and my explanation of why the president’s action was most appropriate follows below.

But before I had the opportunity to complete my analysis last night, I heard the president’s address to the nation — delivered at 11 AM EST on Wednesday.  If you have not yet seen it, please take the time to do so here:

He was reasonable – he made his case.  And he was unapologetically strong, without being bellicose or speaking in terms that anyone could remotely call war-mongering.  In all, he provided additional clarity for the points I intend to make. 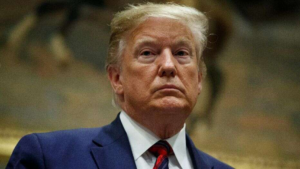 The divide between right wing commentators such as myself and those on the left who think that the nuclear agreement was worth retaining and that it would have been possible to reach a détente with Iran via good will and positive gestures is very large.

Conciliation and good will do not work with entities that have aggressive and expansionist intentions. Good will, however expressed, is read as appeasement – it signals weakness and emboldens the aggressive party.  The classic example here is the Munich agreement with Hitler, but history abounds in other such examples. Good will only works if it is mutual.

Those who would like to believe in the possibility of genuine détente with viciously aggressive entities tend to kid themselves about what is happening.  They write off threats that should be taken seriously (“Death to America!” “Death to Israel”) as mere rhetoric, and close their eyes to the evidence of aggressive acts and weapons stockpiling – the implications of which should be considered most somberly.

I have already written about some of the “activities” of Soleimani, and indicated that the list was only an overview.  The more one knows about how the terror apparatus of the Iranians has functioned, the more aghast one becomes.

The mullahs of Iran—who are radical Islamists—are working towards hegemony in the Middle East. 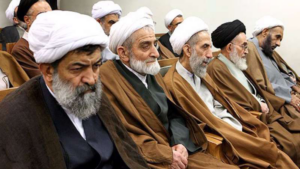 Relying upon the leverage and machinations of the IRGC Quds Force Corps, which was headed for 20 years by Soleimani, they have managed to wrest control in Lebanon, gain significant control in Iraq (where they are working to establish bases for weapons transfer), and have major input in Syria.

Two of their primary goals have been emplacement of the Quds Force directly on the Golan at Israel’s border – from which point attack on Israel would become easier – and establishing a path that leads all the way to the Mediterranean, from Iraq at Iran’s border through Syria and then Lebanon.

With regard to Israel, not only has Soleimani massively armed Hezbollah, he funded the terrorist groups Hamas and Islamic Jihad in Gaza, assisting them in acquiring sophisticated weapons.

Head of the Hamas politburo Ismail Haniyeh (pictured) spoke at the Soleimani funeral, referring to him as the greatest supporter of the Palestinian resistance and the Palestinian struggle for national recognition.

Egypt, which is now furious, had agreed to Haniyeh’s request to leave Gaza via Egypt because he promised not to attend the funeral; then he turned around and did so.  Thus do we see how beholden to Iran Hamas feels. An Egyptian official said that what Haniyeh did was a blow to Egypt’s honor. 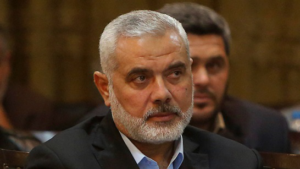 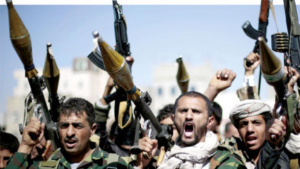 Oh, and then there is Yemen, where the Iranian proxy Houtis (pictured) – aided by Soleimani – have destabilized the country, taken over its capital, and threatened neighboring Saudi Arabia. Iran has supplied the Houtis with ballistic missiles, which have been utilized against Saudi Arabia

This whole scenario is scary as hell, but it is still not the end.  Operations by the Iranian proxy Hezbollah have been detected in South America, Europe, and Africa.  Hezbollah has been entrenched deeply in Latin America for years.

Lastly, and very significantly, there are malign Iranian intentions toward the United States, which is, after all the Big Satan.  Iran has been responsible for the death of hundreds of Americans, civilians and military, in the Mideast.

What will come as a huge shock to many: Iran has been implicated in the planning – not the execution – of 9/11.  This is from Claire M. Lopez.  Vice President for Research & Analysis at the Center for Security Policy, she is a very reliable and knowledgeable source.  Here you can find a brief clip from a longer interview: 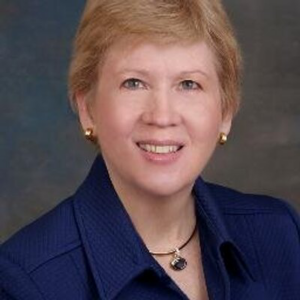 What every American should know—and I am quite sure most do not—is that Iran is working on developing ballistic missiles with a range sufficient to reach the US. The regime already has highly sophisticated armaments and is working on the Shahab-6 and Shahab-7.  These are still in the developmental stage, and estimates of its ranges may not be accurate, but it is anticipated they might reach the eastern shore of the US.

The end goal in developing a ballistic missile to reach America would be to equip it with a nuclear warhead.  Then, from the mullahs’ perspective, there would be no limit on what they could do: they would be unstoppable. Note this well!

The treaty with Iran—the Joint Comprehensive Plan of Action—signed in 2015 by P5 + 1 (the five permanent members of the UN Security Council, China, France, Russia, the United Kingdom, the United States, plus Germany), together with the European Union, was supposed to ensure that Iran did not have the ability to develop nuclear weapons.

It did nothing of the sort.

As I wrote previously, during the course of tracking the negotiations, I became convinced that the treaty was a horror.  It was full of holes, and left out much that should have been included.

All in all, Obama’s position during negotiations left the distinct impression that he was an enabler of Iranian ambitions, rather than a protector of American and western interests – so eager to reach “a deal” that he was unwilling to stand strong when he should have.

There were instances in which he lied to the American public so that they would remain supportive of the project.  And even though there had been appeals to Obama to include clauses prohibiting Iranian support for terror organizations, he rejected them, nor was ballistic missile development prohibited.

Iran agreed to inspections by the International Atomic Energy Commission, but included a clause that prohibited inspections on military sites, which made a farce of the entire agreement.

The greatest failure of the treaty, however, was the inclusion of sunset clauses:  Under the deal, the restrictions on Iran’s centrifuges would go away after 10 years (in 2025) and the limitations on uranium enrichment would disappear five years after that (2030).  Once these restrictions were lifted, Iran would be free to pursue its intentions in developing nuclear weapons.

This then was the legacy of the Obama administration, and this is the situation that Trump inherited when taking office.

Joseph Klein writes about how horrendous that situation was:

“…as a result of the disastrous nuclear deal with Iran, the Obama-Biden administration helped fund Soleimani’s terror campaign not only in Iraq but also in Syria, Lebanon, and elsewhere in the region. The administration became in effect the Iranian regime’s banker. The administration paid a ransom of more than a billion dollars to get some of our hostages back. Many more billions of dollars were made available to the Iranian regime as relief was granted upfront from the harsh sanctions that had helped to constrain the Iranian regime’s terrorist funding. Former Secretary of State John Kerry admitted in 2016 that it was likely that some of the billions of dollars in sanctions relief negotiated as part of the nuclear deal ‘will end up in the hands of the IRGC or other entities, some of which are labeled terrorists.’”

In May 2018, President Trump, in his first serious efforts to constructively deal with the problems of Iran, pulled the US out of the JCPA agreement.

“The Iran deal is defective at its core,” he declared. “If we do nothing we know exactly what will happen.”

Well…yes.  Why have so many refused to see this?

The president also reapplied economic sanctions to Iran.  Those sanctions have weakened Iran considerably – causing riots in the streets of Tehran and other cities, as well unrest elsewhere.

For this alone, the president deserves the gratitude of every American, as Iran’s capacity to do serious damage to America has been diminished.

This leads us, then, to the president’s most recent decisions with regard to Iran.  He decided that enough was enough, and where killing of Americans was concerned it was time to step forward and do something about Soleimani.

As Michael Ledeen wrote two days ago, “To the Mullahs’ astonishment, Trump is not Obama.”

“There is a lot going on, and a lot of confusion, much of it revolving around the notion that ‘war’ between Iran and the United States has become more likely.

“That is misguided. As Eli Lake tweeted, it’s misleading to say that the killing of Soleimani is the opening of a new war…It’s more accurate to say that it opens a new chapter in an ongoing war, a war that Iran declared immediately following the revolution of 1979. “

It’s important to understand this basic fact.  America has been engaged in a war that most Americans, and many American leaders, have not acknowledged.

There can be no certainty of anything.  However, right now, for all of the bellicose threats of its leaders, it does appear that Iran will settle for token revenge. They launched a barrage of missiles at a site in Iraq where American soldiers were located, but top-notch intelligence allowed time for them to move out before the missiles hit. (Inside Iran, the news had it that many Americans had been killed.)

Iran is likely to settle for far less than the proportionate revenge that was threatened.  This is because Iran is currently weak and struggling. Its resources are limited.  What is more, its leaders are afraid of President Trump and know that the American military far stronger than the Iranian.

“For far too long, all the way back to 1979 to be exact,” said the president, “nations have tolerated Iran’s destructive and destabilizing behavior in the Middle East and beyond.

“Those days are over.

“Iran has been the leading sponsor of terrorism, and their pursuit of nuclear weapons threatens the civilized world. We will never let them happen.”

Trump also said that there will be further sanctions levied against Iran, until such time as there is a change in Iran’s behavior.  This is important – for although the recent actions by the president have demoralized and further weakened the Iranian regime, it is still standing, and still capable of wreaking damage.

He is calling upon UK, Germany, France, Russia and China to join in negotiating a new nuclear treaty with Iran that “makes the world a safer and more peaceful place.”

President Trump will not make the correct call in every single instance: no political leader does.  But he is on the right track and I go on record here with praise for him for what he has done, and wishes to do. 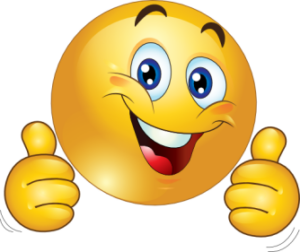 As to the vile Democratic members of Congress who seek to criticize him and restrict him for partisan purposes, when they should be standing behind him, I express only the greatest contempt.  They are shameful.