From Israel: How Crazy Is It?

In brief, this crazy:

On Monday, the IDF identified a tunnel from Gaza that had entered Israel.  It was under active construction, and not simply left over from before 2014.  Beginning in Khan Yunis in southern Gaza, it extended “dozens of meters” into Israel – headed towards Kibbutz Kissufim two kilometers away; there was no opening on the Israeli side.

The IDF had been monitoring the progress of this tunnel for some time, and acted after Israeli sovereignty had been violated.

As Chief of Staff Lt. Gen. Gadi Eisenkot  (shown at a meeting on the issue, second from left below) declared: “Any… violation of Israeli sovereignty will be answered with determination and in a forceful and clear way.” 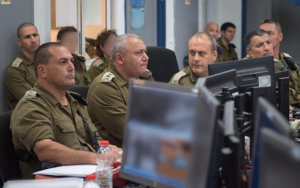 Operating on Israeli soil, the army blew the tunnel up by means of a “controlled demolition” carried out near the fence with Gaza.  On the Gaza side, a number of terrorists who had approached or entered the tunnel died.

Reportedly there were seven dead and some 12 injured; five of the dead were Palestinian Islamic Jihad, including two senior commanders, and two were from the armed wing of Hamas.

The tunnel, it turned out, was an Islamic Jihad project. Khaled al-Batsh, a senior leader of PIJ, explained to attendees at the funeral:

“The purpose of the tunnel was kidnapping [IDF] soldiers in order to free prisoners [from Israeli prisons].”  In due course, he said, they would build another tunnel for the same purpose.

Needless to say, Islamic Jihad was not happy about the situation, both because of the loss of two leaders and of a strategic asset.  Here you see PIJ members at the funeral: 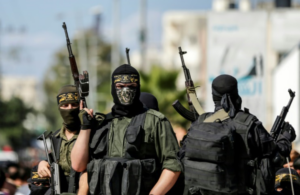 In short order a number of things happened:

On Monday night, IDF Spokesman Brig.-Gen. Ronen Manelis said, “There was no intention to harm any senior officials. The action was in our territory and the people died in their territory.”  He explained that the deaths on the Gaza side resulted from collapse of the tunnel, and smoke and dust inhalation.

My immediate guess was that the deaths were being played down so as to discourage retaliation, which is a very real concern.

Education Minister Naftali Bennett, a member of the Security Cabinet, then publicly criticized the IDF:  “We must not apologize for our success in eliminating terrorists.” 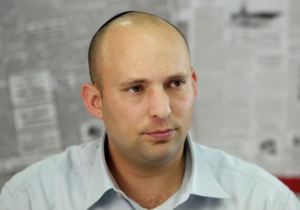 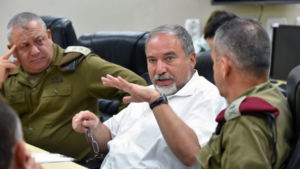 Several MKs also made statements about how excellent the IDF operation had been.

Meanwhile, the IDF clarified that no “apology” was intended – the original briefing had been simply to define the nature of the operation, which was defensive and not offensive in nature.   What had been said was indeed the fact: the IDF had not set out to kill PIJ leaders, but to protect Israelis by eliminating a tunnel.

However, stated an IDF spokesman, they “did not regret” killing the terrorists.

Contentious internal politics aside, what I have just described reflects a tense situation, with some fluctuating parameters.

Every major official in Israel who commented on the situation, including Bennett, added the proviso that what happened should not be interpreted as an “escalation.”  The concern was that this might lead to major hostilities.

And on the other side, because of their “reconciliation” with Fatah, it was actually Hamas that sought to restrain PIJ from retaliating.  There was concern in the Hamas camp that a response from Islamic Jihad might cause a deterioration in the situation that would be counterproductive for them.

And, indeed, on Wednesday, Hamas turned over control of Gaza crossings – Erez and Kerem Shalom into Israel and Rafah into the Sinai – to the Palestinian Authority.

Hamas would no longer be collecting its own “taxes” on goods entering from Israel.

Within a couple of weeks, Egypt should be opening Rafah permanently from its side, providing Gazans with a greater opportunity to leave.  The PA, which will have security responsibility, is committed to preventing a flow of weapons and explosives via Rafah; this has been of considerable concern to Egypt.

All this said and done, there is considerable unease within Israel that the volatile Islamic Jihad cannot be restrained much longer by Hamas, and that retaliation is only a matter of time.

As one IDF officer pointed out, IJ is supported by Iran, which may well push it towards creating disruption.

The PA, for its part, took advantage of the situation to come out swinging against Israel (figuratively), in a manner that is hardly designed to cool the situation.  This is simply the way they always play it.

“…we sent a message of mourning for the martyrs of the crime committed by the occupation forces yesterday in the Gaza Strip, which resulted in the deaths of nine civilians.

“The government strongly condemned this aggression by stressing that the international community, and first and foremost the U.S. administration, must take aggressive measures to force Israel to cease all attacks on our people and to act to provide international protection to the Palestinian people.”

Please note that the leaders of the terrorist organization Islamic Jihad are referred to as “civilians.”

Hamas, for its part, referred to the death of the terrorists as a “grave escalation” by Israel.

In their respective statements, both Lieberman and Netanyahu alluded to the fact that new technology was at work in the discovery of the tunnel.  The defense minister referred to it as, “a significant technological breakthrough that allows us to better deal with the tunnel threat.”

We’ve been hearing for some time about the fact that intensive work was being done on such technology.  If we are now at the point of being able to utilize it – identifying digging being done underground – then this is indeed good news in terms of Israeli security.

Of course, this also represents a source of huge frustration for Islamic Jihad and Hamas.

And there is more that is positive:

I know that the bodies of some of the terrorists who died were retrieved – there was a funeral, and I have seen pictures of at least a couple of those bodies.  But it turns out that not all were retrieved and Hamas is not able to collect those bodies (said to be five in number): Israel bans people in Gaza from coming with 300 meters of Israel’s security perimeter on the border, on the Gaza side.

Hamas put in a request with the International Red Cross, asking that they be permitted to retrieve the bodies.  But, according to Israel National News, Major General Yoav Mordechai, Coordinator of Government Activities in the Territories (COGAT), has indicated that the request will be denied until Hamas provides information on the bodies of Hadar Goldin and Oron Shaul, which they have been holding since 2014.

A good move.  Turns the tables a bit.  As I wrote recently, Hamas was said to be demanding we release all those recidivists who had been rearrested after the Shalit deal in return for information about the bodies.  Just “information.”

But why should we settle for “information” now?  Why not an exchange of bodies – Goldin and Shaul for terrorists who died in the tunnel?

This is what the Goldin and Shaul families are demanding.  The Shaul family points to the irony of the fact that Oren died in a Hamas tunnel.

According to YNet, General Mordechai will be requiring “progress” on the issue before a search in the tunnels can begin.

“Progress” is a vague term that might suggest more than “information.”

In coming days we should have further clarification on this.

There are complaints, from Hamas and far left Israeli NGOs, that what the IDF is doing contravenes international law.  Unmitigated gall, to register this complaint.

Under absolutely no circumstances should our government weaken here in the face of international pressure or suggestions that we are not behaving “humanely.”  We know we are in the right, and must stand strong on this.

What a pleasure to be able to squeeze Hamas.

Yesterday, according to reports, the IAF struck a military installation located in a copper factory in HisyaiHH, a city south of Homs, in Syria.  The Syrian army responded by firing a surface to air missile.

According to Maj. Gen. (ret.) Amos Yadlin – a former IDF Military Intelligence chief and now director of the Institute for National Security Studies – this sent a “resounding message” to regional players, providing proof that Israel was “insisting on red lines against Iran and Hezbollah in Syria.”

He pointed out that the attack occurred at about the same time Russian President Vladimir Putin was visiting Tehran and Hezbollah leader Hassan Nasrallah was meeting with a top Hamas official, Saleh al-Arouri, in Beirut. 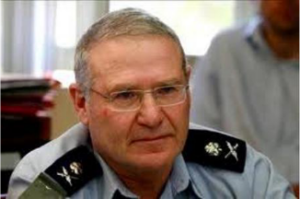