From Israel: Hope Is with the People

“Hope Is with the People”

It’s the people of Israel, more than many of our erstwhile leaders, who seem to be getting it right as we face down Palestinian Arab incitement and violence.

Last week after the decision was made to remove the metal detectors from outside the Temple Mount, Channel 2 did a survey that showed that 77% of Israelis disapproved of that decision.  That’s a very hefty percentage. (The poll drew upon a statistical sample of Israelis – as far as I have been able to determine, it was not only Jews who were polled although perhaps this was implied.  If we factor in the opinions of Arab Israelis, who were far more likely to be opposed, that is very hefty percentage of the Jewish population indeed.)

There is also another figure provided in the survey that I found interesting: When asked about whether the detectors should have been put up, 68% responded positively, 9% fewer than those who disapproved of taking them down. This means that even some people who would have preferred the detectors not go up understood that it would be seen as surrender to remove them: once you’ve done it, stand by it.

This survey – which was widely publicized – is likely to have an effect on statements and decisions made by our prime minister in the near future, as he seeks to show the electorate that he can be tough. 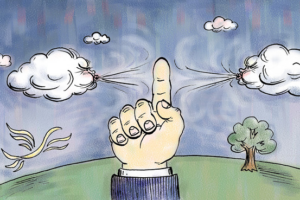 Yesterday, he attended a ceremony for laying the cornerstone for a new neighborhood in Beitar Illit, which is a sizeable ultra-Orthodox community in the Gush Etzion area. “We work vigorously to settle every area of Israel,” he declared. “No government has done more for settlement than mine.” (Emphasis added)

Determination by Israelis to stand strong was seen on Tisha B’Av in at least two instances. 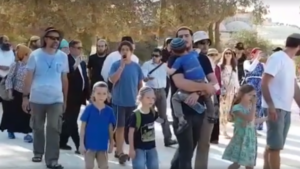 This was a strong statement.

Also strong was the turnout for the 23rd annual Women in Green walk around the walls of the Old City, held on the eve of Tisha B’Av. 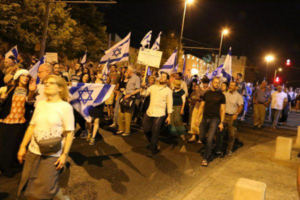 Until the last moment, it was not clear that this event – which would bring participating Jews from across the country through Arab neighborhoods – would take place.  The police had indicated permission might not be granted because of the recent violence in the area.  They are to be saluted for giving the go-ahead and providing necessary security.

Rest assured, these events were well noted, making it difficult for Arabs to claim that the Temple Mount and Jerusalem belong to them.

Although they do keep trying, of course – protesting that the presence of Jews at the Kotel on Tisha B’Av was a “desecration” of a Muslim holy site, the Al-Buraq Wall.
.

I want to revisit the subject of Jordan here, in particular with regard to the behavior of the Jordanians during recent tensions:

King Abdullah forever advances a public stance that is hostile to Israel, in spite of the fact that he would not be on his throne if not for Israel.  What is more, according to terms of the Israeli-Jordan peace treaty, we provide Jordan with very generous quantities of desperately needed water (50 million cubic meters annually). 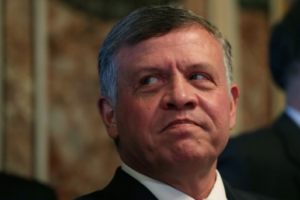 What is maddening, then, is that our prime minister accedes to Jordanian demands a good deal of the time.

Many analysts justify this dynamic. Well, they say, in private Israel has an important cooperative relationship with the king, who is unable to speak favorably about Israel publicly because of the deep antipathy to Israel expressed by his people. Besides, say these analysts, we need Hussein on the throne as a bulwark against jihadists taking over at our border.

But this thinking does not at all address the king’s failure over the years to shift public opinion vis-à-vis Israel.  I would suggest that the anti-Israeli, anti-Jewish attitude of the populace simply suits his purposes on a number of levels – starting with the fact that it turns anger outward and serves as a distraction from internal discontents.

Nor does this rationale remotely consider Abdullah’s obligations to Israel.

In light of this, I found an article by Dr. Mordecai Kedar on this issue – “Israel Needs to be Tougher with Jordan” – to be very refreshing.  And so I share it here:

I will add that his thesis – that if we allow the king to fall we’d see a Palestinian Arab state replace his Hashemite kingdom – seems to me not a sure thing, as there are radical non-Palestinian Arabs present in Jordan who might seize power.  His position, however, is gaining traction.

Abdullah will be paying a visit to Abbas in Ramallah this coming week.  He hasn’t been in PA areas for five years.  This is being interpreted as a message to Israel following the Temple Mount crisis.

The irony here (this whole situation abounds in ironies) is that privately Abdullah far prefers Israel at his border, rather than a Palestinian Arab state.  But it would most definitely not be politically correct for him to say so out loud.

The king has just earmarked $1.5 million in additional funds for the Waqf on the Mount.

A briefing that Jared Kushner gave to Congressional interns on Monday was supposed to be confidential but was leaked in its entirety.  I do not know if it made much press in the US, but had considerable exposure here.

It was deeply disconcerting because it exposed the lack of congruence between Kushner’s reading of the situation here and the role he assumes.

The line from the briefing that made headlines was, “There may be no solution.”  This is a far cry from the bravado of Trump’s statement in the first days of his administration, when he said that solving the Israeli-Palestinian Arab conflict may be easier than people think.

“What do we offer that’s unique?” he asked rhetorically. “I don’t know.”

He and Jason Greenblatt work on this, however, because “it’s one of the problem sets that the president asked us to focus on…”

So, has Jared told his boss that there may be no solution?

Truly disconcerting was Kushner’s description of the Temple Mount crisis, in which the US became heavily involved (emphasis added).

He began by describing the situation and saying that Israel’s action in putting up metal detectors was “not an irrational thing to do. You know when you have—police officers were just killed, and weapons that were used to…”

Then he acknowledged that the Arabs incited:

“…so then what happens is they start inciting it….

“They say look, you know, this is a change to the status quo. The Temple Mount is a [unintelligible] occupation of Israel, and Israel was saying we don’t want anything to do with that, we just want to make sure people are safe….”

So what was the US response?

“So we’re going to work with them…to take down the metal detectors there, and then I think one of the Palestinians’ religious leaders was saying, ‘If you go through the metal detectors, then your prayers don’t count.’ And that is not a very helpful thing to have said. And then there was a lot of rage. And there was an Israeli family that three people killed in their home, which was absolutely terrible. You know, so, ‘I’m going to do this to free the Temple Mount.’

The name of the game here is keeping things quiet, so that there can be movement towards “peace.”

The Trump administration is not hostile to Israel.  Not at all.  But neither does it have Israel’s back.  To recognize that our behavior was appropriate, and that the other side was inciteful and unhelpful, and then to push Israel to cave to that incitement was egregiously wrong-headed.

What Jared and company do not realize is that they haven’t brought peace closer by this action – even though this is what they imagine.

They have, first, given the Arabs the message that incitement and violence work.  And, then, they have given us the message that, when push comes to shove, we cannot trust them to stand with us even if they know we are right.

You will notice, please, that Jared said they signed off with Jordan on this.  King Abdullah is a sacred cow.

It’s the same dynamic: the US is said to need Abdullah on the throne, and thus steps carefully with him without challenging him, the assistance the US provides Jordan – including over $1 billion this year – notwithstanding.