From Israel: Getting to Better

Recent events, both here in Israel and in the larger world, have generated in many of us feelings of distress, turmoil, confusion and anxiety.  There is a whole lot that is wrong, or crazy, or frightening going on.

But as I sat down to write this post, I was able to revise my impression a bit.  If we look carefully, there is a glimmer of hope in several spheres. 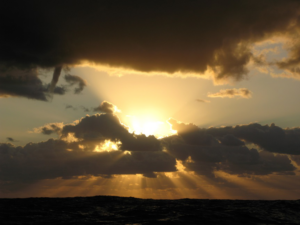 And that is what I want to focus on today: a brief survey of a couple of key situations, with more to follow if and as those situations evolve.

We can start with the fact that a Trump “peace negotiations” team returned to the area.  The rational response to this is that it is nonsense – that no “solution” is forthcoming.  Trump senior advisor Jared Kushner apparently admitted as much not long ago.  Yet, here they were again:

Kushner, special envoy Jason Greenblatt and Deputy National Security Adviser Dina Powell left the US on Sunday, and quietly met with officials from United Arab Emirates, Jordan, Qatar, and Saudi Arabia in the days following. They arrived in Israel Wednesday night, charged with finding a path for talks.

This news evokes a loud groan in many quarters here.

What should be noted, however, is that the groan can be heard from PA areas as well as in Israel.  Actually, PA officials are traumatized.  They had eight years with a president who essentially made their agenda (eastern Jerusalem as capital of a Palestinian state, Israel’s return to the 1949 armistice line, etc.) his own.  This is no longer the case.

The PA’s Mahmoud Abbas said, first, that he doesn’t see how the Trump people can successfully facilitate peace in light of the “chaos” in the American administration.

And then, and more significantly, he laid out his routine demands and made it clear that nothing short of a full Palestinian state would be acceptable.  He has, undoubtedly, heard the increased talk of alternatives to that “two-state solution.”

Actually, Abbas aide Ahmad Majdalani said Kushner had been asked for the US position on the issues of Israeli “settlements” and support for Palestinian Arab independence when he was in the area last June. 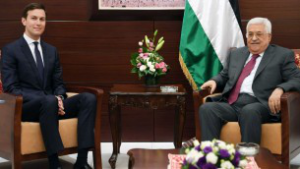 “Since then we didn’t hear from them,” Majdalani said.

“We hope they bring clear answers this time.  If not, then the peace process cannot be resumed because we cannot negotiate from scratch.” (Emphasis added)

Let us hope that Majdalani means it.  For the US answer is that there is no answer:

“We are not going to state what the outcome has to be,” State Department spokeswoman Heather Nauert said. “It has to be workable to both sides. That’s the best view as to not really bias one side over the other, to make sure that they can work through it.” (Emphasis added)

Of course, a question remains:  It is SO obvious that Israel and the PA are not going to agree on terms for a deal that you cannot help but wonder why the US is bothering.  Either this is very, very stupid, or they have a plan to expose the realities.

At any rate, in the short term it does seem that Israel will not be unduly pressured by the US.

Meanwhile, a panicked PA is attempting a number of ploys. One is a veiled threat to dissolve the PA.

I wish I had a shekel for every time that threat has been made.

And this is cute:  The Palestinian Arabs want their own Balfour Declaration, so to speak.

In November we will be celebrating the 100th anniversary of the Balfour Declaration, in which the British government for the first time recognized Palestine as a homeland for the Jewish People.

Of course, the British are trying very hard to have their English cake and eat it too.  They say they are proud of the Declaration; they have refused the PA demand that they renounce it and ignored PA threats to sue them.  But they are also proudly for the “two-state solution,” which undercuts that original Declaration. 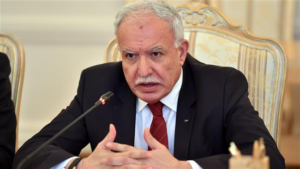 “I call for the current British foreign minister [Boris Johnson] to be famous for giving the Palestinians a promise called the ‘Johnson declaration’ that recognizes a Palestinian state.”

Obviously, this is not going to happen.  But calls by the PA for recognition as a state, without a negotiating process (which means the need to compromise), persist.

The meetings with both sides have been completed.  Here you see Greenblatt, Kushner, Netanyahu, Powell, and US Ambassador to Israel David Friedman after the meeting yesterday. 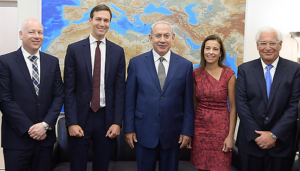 Though not in this picture, Israeli Ambassador to the US Ron Dermer was also present.

“The president is very committed to achieving a solution here that will be able to bring prosperity and peace to all people in this area.” He expressed appreciation for the prime minister’s readiness to engage.  But there is no word of any new initiative or progress.

Netanyahu, in his expected style, replied that that peace, prosperity, security and stability in the area “are within our reach.”

Over in Ramallah, Kushner met with pessimism and disappointment.  There were demonstrations against the presence of the delegation.

Actually, it was worse than that.  See below the anti-Semitic protest sign, with Ivanka, the president’s daughter and a Jew, leading Jared around on a leash.  That’s going to go over well in the White House. 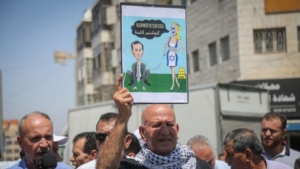 Mahmoud al-Aloul, the second-ranking official in the Fatah movement, said US negotiators were focused on “Israeli lies” about Palestinian incitement to violence.

I will mention this issue only briefly here, with the hope of following up with further details as I secure greater legal clarity.  I find this to be potentially a very encouraging situation:

The Settlement Regulation Law, which passed the Knesset in February, was designed to prevent the demolition of Jewish houses in Judea and Samaria if Arabs claimed the property after the fact.  The Law was applicable to some 4,000 Jewish houses. If the Jewish building had been done in good faith, and with the assistance of various government agencies, monetary compensation would be provided instead of demolishing the house.  This is what is done in Israel within the Green Line and fairly routinely in the western world.

Naturally, there was a challenge to this (I will not deal here with the nature of the challenge, which is a whole other problem). The Court put a hold on part of the law.

Now the government of Israel has submitted a brief to the Court defending the law.  The State says this is the only fair solution for Jews and Palestinian Arabs alike and maintains that halting the evacuation of families from their homes is of the highest priority from national, social, political and human interest perspectives.  What is more, it adheres to international legal standards.

What is exciting here is the nature of the 159-page brief – written by Israeli attorney and author Dr. Harel Arnon (pictured below) – that has been submitted to the Court.

After the Six Day War in 1967, the Israeli government voluntarily assumed responsibility for humanitarian provisions of the Hague and Geneva Conventions.  That is, the government would conduct itself as if it was a belligerent occupier in Judea and Samaria, for humanitarian purposes.   When issues regarding Judea and Samaria came before the High Court, this government position was taken into consideration; thus the Court consistently ruled that Jewish houses on Palestinian property had to be demolished.

Dr. Arnon’s brief now argues that the principle of eminent domain should be applied instead.

That is, Israel’s position viv-a-vis Area C of Judea and Samaria has now shifted.

As it weighs the State position in its rulings, there is a very reasonable chance that the Court will accept this.  This would represent a major development.  But the very fact that the government position has changed itself represents a significant and promising shift in the right direction. 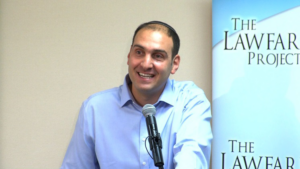 Not only will I follow up on these issues in due course, I hope to look at other situations that offer promise as well, in the days to come.