Bringing us up to date: Tuesday night, after a day of rocket attack from Gaza, all was relatively quiet. Then on Wednesday, serious rocket barrages began again.

At that point, Israel’s response intensified, first with regard to the level of our military response – but in other ways as well.

Minister of Defense Naftali Bennett put out a video in which he declared (emphasis added):

“Over the past 24 hours the Jihad Islamic terrorists shot over 250 rockets and missiles on Israelis.
On our families. On our children.”

“But these terrorists are not only out to kill Israelis. In fact, they’re killing their own people in Gaza. At the cost of every rocket they shoot, they could have built another Gazan classroom.

“Israeli security forces will hunt down every terrorist, until our children are secure and safe…”

Any terrorist that attempts to harm us during the day will not survive the night, Bennett warned. 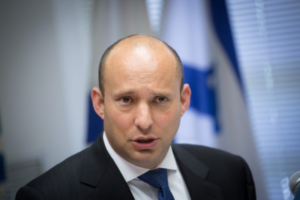 At the same time, Prime Minister Netanyahu told the heads of local councils in the south, by phone:

“We are changing the balance of things…

“The heads of terror organizations, the commanders and terrorists, know that they are on our radar, and that any moment we might act against [them] in any area.  This is a message they understand well.

“We decided to increase our deterrence via new means which they did not imagine. We carried out a surgical type of action. Every terror leader, every commander, knows that we can reach him personally. They fire from a civilian population and hide behind civilians. Now we broke the equation when we eliminated Baha Abu Al-Ata when he was hiding.” (Emphasis added) 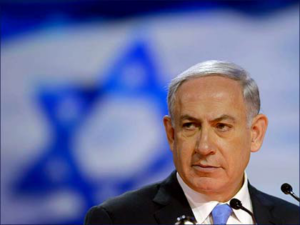 These were not just words.  Imagine: Al-Ata thought he was in hiding, but we not only tracked him down, we managed to take him out with such laser-like precision that we hit the bedroom where he was sleeping and left the rest of the building standing.  Pretty unsettling for the commanders of the terrorist forces in Gaza.

And there was more:

According to Al-Hayat, a London-based paper of record for the Arab world, on Wednesday, Israel conveyed a massage to Ziyad al-Nakhalah – head of Islamic Jihad based in Damascus – that if the rocket fire did not stop, he would be next on the list of targeted assassinations. This message went to United Nations Mideast Envoy Nickolay Mladenov (pictured), who relayed it to Egyptian officials, asking that it be conveyed to Islamic Jihad.

Mladenov was in Cairo, working with the Egyptians to achieve a ceasefire. 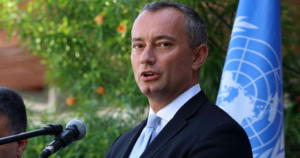 Al-Nakhalah had reason to take this seriously.  According to the Syrian news agency SANA, on Tuesday (the same day that Al-Ata was assassinated), there had been “hostile targeting” by several missiles of a residential building near the Lebanese Embassy in Damascus.  This residential building was the home of Islamic Jihad senior official Akram Ajuri, said to be al-Nakhalah’s right hand man. 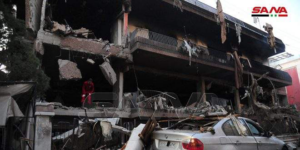 Ajuri was apparently assassinated in this attack, although some reports indicated he was wounded but not dead or that his son was killed.  Whatever the case, he had been located and targeted, and the fact that his residence was in Damascus and not Gaza had not meant that he was beyond Israel’s reach.

Al-Nakhalah got the message.  Islamic Jihad had been declaring that it was not prepared for a ceasefire.  But before the day was out on Wednesday, he had gone to Cairo to participate in ceasefire discussions.

At 5:30 AM today, Thursday, it was announced that an informal ceasefire had gone into effect. Later in the morning there was a volley of five rockets from Gaza, and the situation remains tenuous: early this evening Iron Dome took out another rocket aimed towards a populated region.

According to an Egyptian official, the agreement stipulates that Islamic Jihad will cease firing of rockets and “maintain peace” during demonstrations at the Gaza fence, while Israel must stop hostilities and “ensure a ceasefire” during those demonstrations, i.e., not shoot at demonstrators (although I have absolutely no doubt that any demonstrator attempting to enter Israel or throwing firebombs at soldiers would be dealt with appropriately).

Al-Nakhalah indicated in a statement that Israel has promised that there will be no more targeted assassinations (his chief concern), but I have seen nothing of the sort in any of the statements from Israeli officials.

To the contrary, Defense Minister Bennett has declared that the “new rules of the game are clear: the IDF will operate with full freedom and no limitations.”

He indicated that, while a ceasefire has been announced and the Homefront Command is lifting restrictions in the south and center of the country, “at this point, it’s not over yet. Only the acts in the field will determine the end.”  The public is cautioned to remain alert.

As far as Israel is concerned, nothing has been given away.

Stated IDF spokesperson Brig.Gen. Hidai Zilberman (pictured), this operation, which has been dubbed “Black Belt,” achieved all of its goals within 48 hours:

The operation, he said, was characterized by “surgical operations and surprise”:

“The purpose of the operation was to improve the security situation in the south by weakening the PIJ [Palestinian Islamic Jihad] and to continue promoting the stabilization process. In this operation, we struck a heavy blow to PIJ’s operational capabilities.”

“…we used only a little of the IDF capabilities – PIJ is not Hamas, nor Hezbollah nor Iran.” 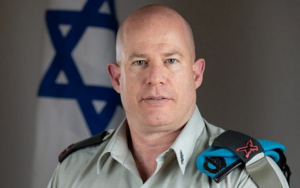 Several points of note in regard to what Zilberman said (emphasis added):

First, that “…the goal of the operation was to focus all strikes against Palestinian Islamic Jihad (PIJ) while leaving Hamas alone, differentiating between the two groups in order to enable the continued stabilization of Gaza.”

I do not believe this has ever happened before, and what makes this particularly noteworthy is that Hamas opted not to join Islamic Jihad in attacking Israel.  Hamas, which maintains only a shaky control in Gaza, feared that hostilities with Israel would finish it.

And then, he said that the IDF needs to remain focused on the northern front.

I have addressed this several times.  Those who insist now that the IDF “gave in” too quickly are missing the larger picture (or simply ignoring that picture while attempting to make political points).

“We are at high readiness and preparedness on all fronts, not only in Gaza. We are facing a significant challenge against Iranian activity in a variety of arenas and not only in Syria.”

Significantly, Zilberman noted that the threats posed by Iran were taken into consideration for the operation and “we took advantage of the window of opportunity in Gaza.”

Some 450 rockets and missiles were launched from Gaza during the two days of hostilities.  I can again, thankfully, report that no one on our side was killed, nor, to the best of my knowledge, seriously injured.

In the course of the operation, we killed roughly 45 people in Gaza in pinpoint strikes aimed at terrorists – a large percentage of those we hit were terrorists, and in multiple instances were engaged in attempting to launch rockets as we hit them.  Late on Wednesday night, just hours before the ceasefire, the Air Force attacked a house in the Deir al-Balah refugee camp, killing Rasmi Abu Malhus, commander of the rocket launching unit in the Islamic Jihad central division.

Our operation was a clean one, effectively run, with close cooperation between our various defense and security forces.

There is one week left to Gantz’s mandate for forming a government, and if the ceasefire holds, we will be back to discussing the political situation.  That is for my next posting.

What I will say here is that Gantz conducted himself honorably throughout the last few days, supporting Netanyahu’s decisions for the sake of our nation’s security.  It is Lapid who has engaged in sniping of a political nature.

I close here with a look at the Israeli people and how we cope with the hardships inherent in the situation of being targeted by rockets.  Those in the Gaza envelope and nearby areas are careful to obey the rules – staying close to shelters, etc.  But it is a stressful situation that is endured, with many hours spent in shelters, and a nerve-wracking anticipation of the next alarm when out of the shelters.

Thus it is with pride that I share the following stories:

Orot Yeshiva students, in the city of Ashkelon, led by Rabbi Eran Tamir, moved among the shelters in the city, singing, spreading cheer, and encouraging the residents.

In the Jewish tradition, a wedding, which marks the establishment of a new home, is not to be cancelled.  That means not even when there are rockets flying over the community where the wedding is supposed to take place.

Eitan Sapir ‒ owner of the Telya wedding hall at Kibbutz Yitzhak (pictured below) ‒ woke up Tuesday morning to the news of rocket fire in the south and realized there would likely be cancellations of weddings by nightfall.  He spoke with Moran and Yaniv — “a wonderful couple, generous, sensitive, very special” — who were having their wedding at Telya that evening.

“…we talked about how we could help those who are facing the terror even on their happiest day.”

They decided to share their wedding with another couple, and put out a message on social media: “We are prepared to host an additional wedding and to celebrate with everyone together with the brotherhood and love that has always existed among us in the nation of Israel.

“Come with your rabbi and your guests, and we will make two weddings together!”

Together they selected the most compatible couple from among the several who responded. They shared their celebration, and Telya wedding hall covered all expenses for the second wedding. 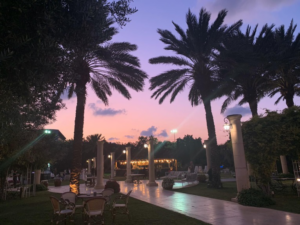 Undoubtedly other couples found other solutions; I know of at least one couple that held their wedding in a shelter.

An elderly resident of Sderot – which is near the Gaza border and was under constant rocket fire – noticed on the TV news that there was a crew of journalists driving around the deserted streets of the city.

“So she did what you’d expect from the resilient, kindhearted people of Israel: waved a balloon at them to grab their attention and invited them in for a meal she had prepared for them, refusing to let them go until they ate!”

As David Lange wrote on his Israellycool site, “This is a reason the terrorists will never defeat us.”

You can see a video of her providing for them here, and you do not have to understand Hebrew to understand very well what she is doing.