Hi-tech innovations coming out of Israel are fairly non-stop.  Consider:

“Made-in-Israel technology is heading toward ubiquity, not just in back-end hardware and software, but even in consumer goods. Case in point: One-third of the smart TVs sold in the world today contain an essential piece of technology made by Tel Aviv start-up Giraffic.

“’As of this year, both Samsung and LG are using our Adaptive Video Acceleration (AVA) technology to ensure flawless playback of streaming content on their Internet-connected televisions,’ said Giraffic co-founder and CEO Yoel Zanger. ‘Right now we are the industry standard for client-side video acceleration and stabilization technology. It’s pretty cool.’”

“Israeli smart communication platform MyState has raised $6.5 million in funding from private U.S. investors. The Tel Aviv-based startup is set on better coordinating the way people communicate, and is launching on Android and iOS. Users are able to automatically check in on contacts to see if they’re available – even before dialing – eliminating the need for call waiting and time wasting.

“MyState shows the availability of a contact before dialing by displaying icons to indicate the person is on a call, offline or has no Internet connection, in a different time-zone, as well as their battery life running low, or charging. It also displays icons to indicate if their phone is on vibrate or silent. In addition, users can type out their own status message, if they choose.

“A key feature of MyState is the ‘Crunch’ button, which is used when a contact is speaking on the phone. By pressing the Crunch button, your smartphone will notify you when the contact is done with their call, and it will also notify the contact that you’re looking for them.”

It’s the barest beginning, but I certainly include as good news the results of the Iowa primary – with Cruz besting Trump and Rubio running a very close third.  Plus Hillary and Sanders neck-in-neck, so that even with a call for her, the close vote is a humiliation.

Charles Krauthammer calls the Republican results a “major inflection point”: It’s no long a given that Trump is invincible, and his victory is far from inevitable.  It is now a three person race, with Cruz, Trump and Rubio.

Daniel Greenfield, writing in Front Page Magazine, says that the primary is good news for the Republicans.  “Republican turnout in Iowa has shattered records. Ted Cruz picked up more Iowa caucus votes than any other candidate ever received despite the crowded field of candidates.”  (Emphasis added)

Other commentators believe the victory was to Rubio:

“Marco Rubio gave a victory speech in Iowa. That might sound astonishing, given that the junior senator from Florida finished third, but the way in which Rubio closed a big two-digit gap between himself and his party rivals Donald Trump and Sen. Ted Cruz in the space of a few days suddenly makes him the Republican institution’s ideal candidate. In Iowa, the winner finishes third.

“Rubio is suddenly being portrayed as the party’s savior, the man who can win not only his party primaries at the Republican convention in Ohio in June, but also the general election in November. According to a CNN poll published Tuesday, 44% of respondents said they believed that Rubio had the greatest chance of beating the Democrats to the White House.”

The bottom line here is that there is hope. For America and beyond.

It is also good news when our government stands up for our rights – a state of affairs that is not inevitable.

On Tuesday, IDF soldiers demolished some 24 illegal Arab buildings around the Arab village of Khirbet Jenbah, south of Hevron. The homes were built in an area that has long been a closed military zone; some 10 or 12 of them had been financed by the EU.

An EU spokesman condemned the demolitions and said (emphasis added), “The EU expects its investments in support of the Palestinian people to be protected from damage and destruction.”

I love it: They support Arab building that is not only illegal but that is situated inside of a closed IDF military zone, and they think we should protect it?  The chuzpah (moxie) of the Europeans is boundless.

The head of a local village council charged that 12 families were left homeless.

“However, Israeli activists have noted that most ‘residents’ of such illegal Arab outposts in fact own homes elsewhere, and set up sites such as these in order to create political ‘facts on the ground.’”

I can vouch for this, as I went, with a Regavim tour, to see the Arab outpost they claim as Susyia, and found that no one was home. There was not single person to be seen. They come out, from their real homes in a nearby Arab town, I was told, when press is expected.

Last posting, I wrote about the PA police officer, Amjad Sakari, who shot at IDF soldiers near Beit El and was subsequently shot dead.  On Monday, his funeral was held in Nablus (Shechem).

“Throngs of marching Palestinians called out ‘Death to Israel’…

“’It is time for the machine gun, to shoot 500 people,’ the man leading Sakari’s funeral procession shouted over a megaphone, his words raucously repeated by the mourners, in footage screened by Israel’s Channel 2. ‘Muhammad’s army will return,’ he vowed.”  (Emphasis added)

Some analysts have been saying that we are on the edge of a full-blown intifada that moves beyond the knifings and car rammings we’ve been dealing with.

And here we are:

Near the Damascus Gate in eastern Jerusalem, which is in an Arab neighborhood (picture of the Gate shown below), two young female border police officers, all of 19 and 20 years of age, spotted three Arabs who looked suspicious.  They approached to check out the Arabs and one produced his ID, while another produced a sub-machine gun that he had been concealing, and shot the officers, one of whom is in serious condition and the other, critical – on a respirator.

Other police officers in the area shot and killed all three terrorists.  Not only were they carrying concealed sub-machine guns, they also had knives and bombs. They were planning something big and the two young border police officers stopped them. 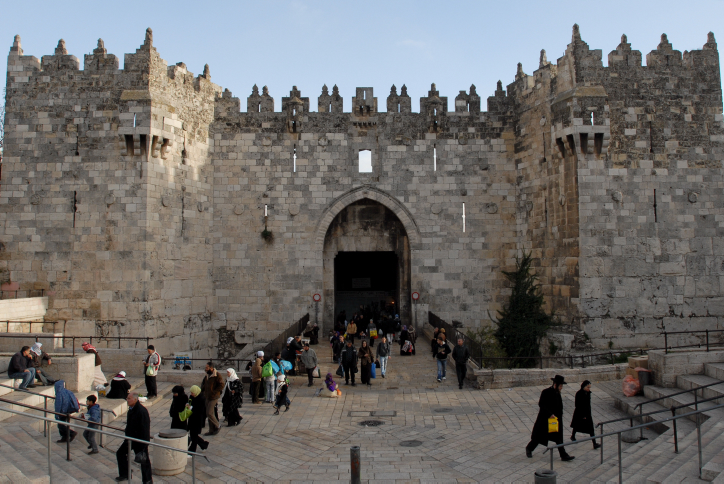 If French leaders found the clearly inciteful behavior at the funeral reprehensible or counter-productive, I failed to notice it.  I rather doubt it, for the French are too busy championing the Palestinian Arabs.

“France will engage in the coming weeks in the preparation of an international conference bringing together the parties and their main partners, American, European, Arab, notably to preserve and make happen the solution of two states.”

He has in mind, he suggests, the venue of the UN Security Council for promoting the negotiations.

“And what will happen if this last-ditch attempt at reaching a negotiated solution hits a stumbling block? In that case, we will have to live up to our responsibilities and recognize a Palestinian state.”

Responsibility to recognize a Palestinian state?  How about responsibility to pressure the PA to stop inciting. and to clean up its corruption, and to have elections, which are way, way overdue?

Why is it that none of this matters to Western powers?  The very same powers who go on about “international law,” most of which is invented.

A “state” is not created simply because nations declare that it has been “recognized”: a “state,” to be a political reality, must meet certain criteria, which have not been met, even remotely, by the PA.

And that’s without even considering the security issues, such as the fact that, were the IDF to pull out of Judea and Samaria, the PA would fall quickly to Hamas or worse.

Even Israel’s opposition leader, Yitzhak Herzog, who is a big “two-state” fan, recently admitted that he didn’t see any way to move ahead now on negotiations for a “two-state solution.”

We have to ask what the motives of France’s officials are here.  A desire to be “leaders” in the Middle East?

An eagerness to show the Arab world – and France’s own Muslims – that they are with the Palestinian Arabs all the way?

An inherent hostility – nice words not withstanding – to Israel?  Or to Jews, more broadly: a new poll shows that 60% of the French believe that Jews have some responsibility for the marked rise in anti-Semitism in France.

This attitude, in and of itself, is a mark of anti-Semitism.

The Israeli government was quick to reject Fabius’s announced plans as counterproductive. “This is not how one conducts negotiations and not how one makes peace,” said a spokesman for the prime minister.  While Energy Minister Yuval Steinitz commented, similarly, that “Israel will not negotiate under ultimatums and threats.”

Even a US spokesman came out against the ultimatum:  “The US position on this issue has been clear. We continue to believe that the preferred path to resolve this conflict is for the parties to reach an agreement on final status issues directly.”

One of the main problems with France’s declared position is that it encourages PA obstinacy and fails to motivate the Palestinian Arabs in the slightest to cooperate or reform.  How sweet it is for them that the international community never holds their feet to the fire, and promises to hand them rewards on a silver platter.

Naturally, then, Abbas was full of enthusiasm for the French plan.  Not the negotiation part, but the “recognize a Palestinian state” part.

In a talk at an Arab summit in Addis Ababa, on Saturday, he made it clear he was not going into negotiations:

“We won’t return to negotiations just for the sake of negotiating and won’t continue to unilaterally implement previous agreements.”

I will not belabor here the outrage of Abbas pretending to have “unilaterally implemented previous agreements.”  Not when a basic tenet of Oslo was educating for peace and cessation of incitement.

Then he went further, declaiming:

“The region will not enjoy security and stability unless the Israeli occupation and settlement activities end. We will stay here on our land and in our homeland, where we have developed our historical and cultural identity and made humanitarian contributions for thousands of years.”

Who challenges these outrageously fallacious statements?  Cultural identity for thousands of years?  The “Palestinian people” – culturally no more than part of the Arab people  – was invented in the 20th century for political purposes.

And humanitarian contributions?  This is laughable.  If we feel like laughing, that is.

It has been announced that the Israel Police has a plan to bolster its presence in the Arab sector. Plans include hiring of 1,300 new police officers and setting up 10 new police stations. Good news, but they should have this done yesterday. And, in my humble opinion, there should be random checks, to search out the presence of guns that are being hidden.

The implementation of this plan will be overseen by a ministerial committee headed by Immigrant Absorption Minister Zeev Elkin and Tourism Minister Yariv Levin.

And the Knesset has now approved the “stop and frisk” law, which permits police to search someone’s body and belongings if there is a reasonable suspicion that he may be about to commit violence, or in the event that he uses threatening or violent language. This had been proposed by Public Security Minister Gilad Erdan. 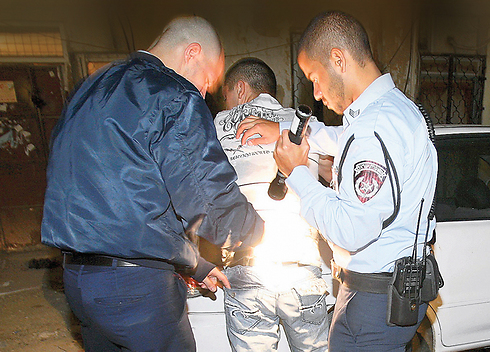 All good moves, but not yet enough.

I close today with Lt. Col. Shai Abramson, Chief Cantor of the IDF, singing a prayer for the peace of Israel: