How long do we play the role of sitting ducks, instead of taking the offensive against enemies?

Yes, this is a recurring theme of mine, and I’ve asked this question, in one form or another, several times before.  Unfortunately, I’m likely be moved to ask it again in the future.

I ask it now because of the focus of the news, and the speeches delivered at the Herzliya Conference, which ends today.

There is, for example, Aviv Kochavi, head of IDF Intelligence, who spoke this morning.  He reported that Israel’s enemies have 200,000 rockets and missiles pointed at the country; thousands have a range of hundreds of kilometers, which means that every part of Israel is within target range now.

“The warheads on these missiles contain hundreds of kilograms of explosives, not dozens, as in the past. And their firing precision and ability to hit specific targets is also greater.  The rockets are largely located in Lebanon and Syria, with a smaller amount in Gaza – and in Iran, as well, which has thousands of missiles that could reach Israel….Every tenth house in Lebanon is now a weapons depot.”

I ask again: And here we sit?

I have never seen myself as having a propensity for violence.  But confronted with information such as that above, I find that my desire to do very serious damage to these enemies waxes strong.  This makes me a realist who takes “Never Again!” very seriously indeed.  Concern about collateral damage is all very humane, and perhaps attention to world reaction is prudent to a point, but we simply cannot be inhibited from making the hits that will protect us. I want us to hit them — the rocket storage areas and the terrorist headquarters, etc. etc. — and hit them hard.

Spoken as a layperson…

For with this all, there is also Iran to contend with.  And here it’s not just a matter of Israelis playing sitting ducks.  Incredibly, it is the world that blithely seeks to play this role, oblivious, or pretending to be oblivious, to what’s coming down the road.

There may be disagreements as to the exact timing, but all experts agree that we’re approaching Zero Hour: The window for doing something about Iran is closing.  This is not just because of their technical ability, but also because of the bunkers they are constructing that make it exceedingly difficult to get to their material and equipment.

Kochavi says that Tehran already has over 100 kilos of uranium enriched to a level of 20% — enough for four atomic bombs.  The issue is no longer Iranian capacity to build a bomb, but the political will.  As yet, they haven’t done so; should they decide to, it would take about a year.

And so, the big question is whether we’re going to hit them.  If we do, it will have to be soon — perhaps by summer.

James Woolsey, the former director of the CIA, and one of the good guys, says it’s time for the US to begin military preparations to stop Iran:

“At some point someone is going to have to decide to use force to prevent Iran from getting a nuclear weapon. I’d argue that those who say we can deal adequately with Iran through deterrence are quite naive.

“National survival is at issue. In the near term that’s the case for Israel, but in the somewhat longer term it is [the case] for the US, which from Iran’s point of view, is the ‘Great Satan.’ This is a world-class problem, not an eastern Mediterranean or Persian Gulf problem. The politics of the world will change if this regime gets the bomb.” 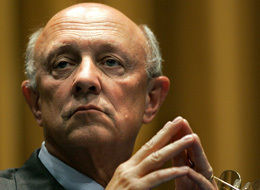 The man knows what he’s talking about. So who’s listening?

Israeli Minister of Security Affairs Moshe Yaalon said today that a major explosion that hit a base near Teheran about a month ago was the site at which a solid fuel propellant missile that would have achieved a range of 10,000 km. was being developed; it would have been able to reach the US.

Americans, do we have your attention yet?  Why is there not a national outcry that the American president has launched a new effort to dialogue with Iran?  Dialogue??

And via Turkey yet. Turkey, says Yaalon, is helping Iran circumvent sanctions by allowing it to use the Turkish banking system.

“Any facility defended by a human being can be penetrated. Any facility in Iran can be hit, and I speak from experience as the IDF chief of staff…

Woolsey says air strikes on the Revolutionary Guards in Iran would do it. “They’re at the heart of everything repressive internally, or aggressive externally.”

He recommends that some five carrier battle groups — consisting of an aircraft carrier, escort vessels and bomber support — be sent to the Indian Oceans.

“What these [battle groups] are capable of doing – should the trigger be pulled – is taking out everything related to the Revolutionary Guards. Not the civilian infrastructure, not the electric grid, not the regular army, not civilian institutions.”

Ephraim Halevy, former head of the Mossad, sees what is happening in Syria as an enormous opportunity.

“If there is a change in Syria, this will have wide international ramifications… The future of what happens in Damascus will impact all of the Middle East.

“[Instead] we should have a main interest in ensuring that the Iranian interest is booted out of Syria. Look at Syria and see it as the Achilles heel of Iran.”

If I have any hope at all with regard to what the US might do, it is because the Americans have now developed a new 15 ton bunker buster — the Massive Ordnance Penetrator or the “Big Blu” —  that is ten times as powerful as its predecessor. GPS-guided, it can go 61 meters underground and break through more than 60 meters (200 feet) of concrete.

Last Tuesday night, which is when I last posted, I reported the early news of the Likud primary count with some enthusiasm.  That early count was way off, I learned yesterday.  And in the end I was most decidedly not enthusiastic.  Moshe Feiglin, challenging Binyamin Netanyahu for the leadership of the party, pulled down some 24% of the vote.  Many, myself included, had hoped to see a stronger challenge to the prime minister.

Tuesday was also Republican primary day in Florida.  With Mitt Romney the big winner there, he’s looking increasingly like the man who will challenge Obama come November. Should this be case, I will hope and pray that he will have sufficient vote-drawing power and feisty endurance in taking on Obama to make it to the White House.  I will only have positive and encouraging words for Romney, who certainly has a great deal going for him, in line with my ABO — anybody but Obama — policy.

It had been anticipated that a vote would be taken in the Knesset yesterday with regard to what has been dubbed the “Outpost Law.”  This is the legislation that would prevent the destruction of so-called “illegal outposts” unless Arabs claiming ownership of the land were able to provide documentation of their claims in court.  Netanyahu is against it and has been applying pressure to block its passage.

Legislation sponsor Zevulun Orlev (Habayit Hayehudi) postponed the vote because he saw that the time was not yet right for securing its passage.  “I will not abandon this legislation,” he has declared.  The vote may be delayed two weeks or more; work is being done to garner sufficient support.

In truth, support exists and the legislation would likely pass if all ministers were allowed to simply vote their conscience.

Orlev deserves kudos for his persistence on a significant issue.

If this committee operates with any seriousness at all, there will be a great deal to say about its findings and legal implications.

Eight rockets launched from Gaza yesterday struck in the Negev yesterday; there were no injuries.

This seemed to be timed for the visit to Gaza of UN Secretary-General Ban Ki-Moon.  Families of people in Israeli prisons were irritated with him because he refused to meet with them: in fact, shoes were thrown at him.

An Israeli company, Impulse Dynamics, is has developed a revolutionary new device, the Optimizer III, which is about the size of a pacemaker and is implanted much as the pacemaker is. Utilizing electrical impulses, it stimulates diseased heart muscle tissue to contract more strongly so that blood is pumped through the body more efficiently.