I would be out-and-out misrepresenting, if I said everything was great.  And if I said that you wouldn’t believe me anyway.

But what I do know is that we are celebrating Chanukah, which brings messages of joy, and resilience and hope.  These are messages we must internalize, especially in bad times.

That said, I put out a request for prayers.  We have been enduring terror attacks – or attempted attacks – on a daily basis.  But of late, either the terrorist has been taken down before damage could be done, or the damage done has been minimal.  Until yesterday, in Hevron, near the Machpelah (the Tomb of the Patriarchs), when Ginadi Kaufman was attacked by a terrorist who stabbed him in the heart, lungs, and stomach.  He is in critical condition and fighting for his life.

Ginadi is a gardener, much loved in the Hevron community, who has been responsible for beautifying the area around the Machpelah.

The terrorist, a resident of Hevron, was taken out.

Before moving on, I must make a correction in my reporting – called to my attention by two readers, whom I thank:

I wrote in my last posting about immigrants in Germany who, insulted by the red cross label on supplies they were given, set fire to their tents.  I had checked and located this story on other sites before running it, but I didn’t do my job well enough: my guess is that these other sites simply drew from the same story I was looking at and didn’t actually provide independent confirmation.  At any rate, I have learned that the site is not a reliable one.  There was, shall we say, a bit of embellishment in their story.  And so, with apologies, I set the record straight.

However – and this is a big “however” – I am not implying that the immigrants are all peaceful and cooperative.  Not at all. They tend to make demands, and to be violent.  They even do set tents on fire sometimes.  We see this in the following stories that are from reliable sources:

The sort of thing that angers them is not being processed and moved out as quickly as they want to be, to the places where they want to go.  But most likely seeing a red cross on supplies does not, in the end, provoke tent burning.

And, I reiterate what I had indicated last time: this violent and demanding behavior is not typically the behavior of genuine refugees who are fleeing for their lives.

Several of the news items I want to report on here have both good and bad aspects, enfolded.  In the main, the “bad” has to do with how officials of other nations are addressing us.  But the “good” – and this is a very big thing – is the way our own officials are standing strong against insults and misrepresentations and more.  No rushing to appease and make these hostile officials happy.

I have a theory: It had to get really bad before our officials stopped caring what others think.  To a very great extent, I measure how we are doing by how strong we are standing and not by what the world thinks of us.  And by that measure, we are doing OK!

Austria’s Vice Chancellor Reinhold Mitterlehner, who is also the Austrian Minister of Science, Research and Economy, was scheduled to arrive here two days ago for meetings with Ofir Akunis, Israeli Minister of Science, Technology and Space (pictured below), to discuss some joint projects.  But then, Mitterlehner discovered that Akunis’s office was in eastern Jerusalem. As it is Austrian policy never to attend Israeli events over the Green Line, Mitterlehner requested that the venue of the meeting be changed.  Akunis refused.  Mitterlehner cancelled.

“Austria will not divide Jerusalem.  With all due respect to the Austrian Minister of Science, united Jerusalem, Israel’s capital for the past 3,000 years, stands above any consideration.” 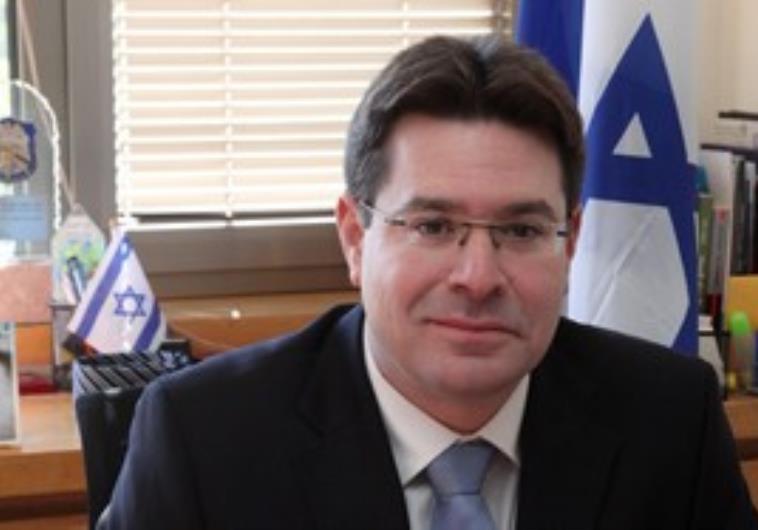 Then there is Swedish Foreign Minister Margot Wallström, who said in the Swedish parliament last week that Israel was guilty of “extrajudicial executions” and  applying “disproportionate” force in response to the current wave of terrorism.

Prime Minister Netanyahu minced no words in his response to her.  Israel, he declared, gives full support to security forces and civilians, “who have the right to defend themselves.”

Noting that Wallström had not called the the killing of the terrorists in San Bernardino “extrajudicial executions,” he said that he had called Swedish Prime Minister Stefan Lofven on Sunday to “strongly protest [Wallström’s] hypocrisy…

“There aren’t two sets of morals, one for Israel and one for the rest of the world.  We will continue fighting terrorism and hypocrisy.” (emphasis added)

Wallström subsequently said she had been “misunderstood,” but it is pretty much a sure thing that this backing off would not have taken place were it not for Netanyahu’s strong stance.

The Swedes have been consistently bad news.  Prime Minister  Stefan Lofven – in his attempt to defend Wallström – actually made the situation worse.  He has now declared that the attacks  by Palestinian Arabs here in Israel are “not terrorism,” since it is not clear that they have been sanctioned by an international organization classified as terrorist.

Then there is Secretary of State Kerry, our perpetual headache.  Kerry may be one of the last persons alive who continues to pump for a “two-state solution.”

Speaking at the Saban Forum of the Brookings Institution in Washington DC, Kerry declared that, “Current trends are leading [toward] a one-state reality…The one-state solution is no solution at all for a secure, Jewish, democratic Israel living in peace. It is simply not a viable option.”

The clear implication here is that Israel should be doing more to prevent this situation from unfolding.

“I want to make it clear—Israel will not become a bi-national state.

“For there to be peace, the other side will have to decide it wants peace. Unfortunately, that is not what we are seeing. First of all, the Palestinian Authority’s incitement continues. This must stop. And I saw that the chief Palestinian negotiator (Saeb Erekat) paid a condolence visit to the family of a terrorist who tried to kill Jews. So not only did [Erekat] not condemn the attack, he expressed his condolences to [the terrorist’s family], thereby giving encouragement and support for terrorist actions.” 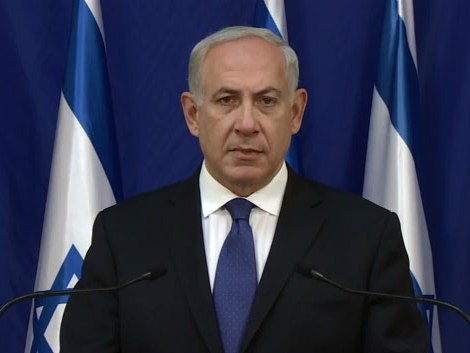 Kerry, in the course of his remarks, also referred to the possibility the PA might collapse, which he implied would be the worst thing that could happen to Israel.  Apparently we are supposed to do more to bolster the PA to avoid a disastrous result:

“Without the PA security forces, [the Israel Defense Forces] could be forced to deploy tens of thousands of soldiers to the West Bank indefinitely to fill the void.  Are Israelis prepared for the consequences this would have for their children and grandchildren who serve in the [IDF]?”

This is a threat, and I do not appreciate it.  He should mind his own business with regard to what Israeli citizens are prepared to accept. And he should open his mind, such as it is, to a host of different scenarios that would have potential to be realized if the – ever inciting, ever corrupt – PA were to collapse.

Let’s take a quick look here at the PA, which we are supposed to dedicate ourselves to preserving:

Recently, the IDF demolished the homes of three members of the Hamas cell who opened fire on Eitam and Naama Henkin, killing them in front of their four children.  Now, activists in Nablus (Shechem), which is PA administered, have launched a campaign called “The Campaign to Rebuild the Homes of the Free Men.”  A large transparent money collection box was placed in the central square of Nablus to raise money for rebuilding those homes. In one day, 115,000 shekels was raised (roughly $30,000).

The collection was shown on Palestinian Authority TV:

The Haifa Customs Authority has seized containers that had been sent from the United Arab Emirates and were on their way to the Palestinian Authority.  According to the importer’s declaration, the containers contained clothing, plastic products, and carpets.  What they really contained, however, were 4,000 terrorist dolls.

Written on each doll were the words ‘Jerusalem is ours’ and ‘Jerusalem, we are coming!’ The dolls wore PA colors, and a keffiyeh.  Each doll held a rock in its hand.

“These dolls were en route to the PA with one clear purpose: to poison the minds of small and innocent children… (emphasis added)

“The nations of the world must understand that until there is a dramatic change in the Palestinian educational system, in the very core of the Palestinian leadership, which only plants fear hate, we cannot conduct any dialogue with our neighbors.”

Once again, my friends, I implore you to share this information far and wide.  You can help educate people and open their eyes to the truth.

For a smile and a sense of quiet pride:

Elieth of Tanzania had arrived at the Wolfson Medical Center in Holon for free life-saving treatment for her 15 month old daughter via the Save A Child’s Heart foundation.  While the child, Dorice, was undergoing surgery, Elieth, who was pregnant, went into early labor.  In one day, she delivered a new baby daughter and received news that the surgery for the older child had been a success.

The new baby was named Laura after the housemother for the SACH families staying in Holon.  Dr. Sion Houri, head of pediatric intensive care, is holding the baby in this picture. 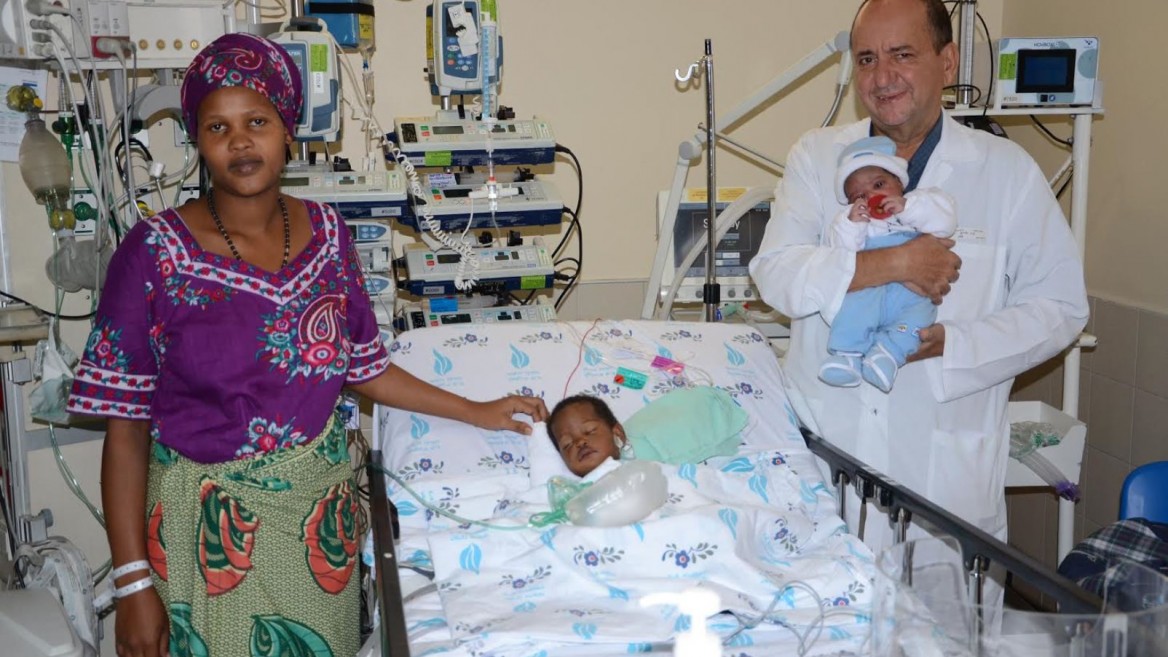 And this piece of good news that I certainly do not know how to comprehend: In spite of the terrorism and the grief and the struggle, our national deficit has dropped 46% in less than a year.  We are doing something very right, and, I would suggest, are blessed from above.

Always, always, there is good news if we seek it.

I close here with this very appropriate song, “The Almighty will bless me from Jerusalem – Shalom al Yisrael”: