The good news?  Lets start with this picture of Yotam Sitboun:

Just a week ago, Yotam was, along with 13 others, the victim of a terrorist car ramming during which a portion of his leg was severely damaged.  According to numerous sources, none official – his parents were not talking – the damaged part of his leg had to be amputated.

The boy’s parents now say they have released this picture to dispel rumors.  “It’s important for us to clarify: false pictures and rumors about Yotam’s health were published.”

Does this mean that efforts to reattach the almost severed leg were successful?  Or that he’s bouncing back from the amputation?  Do not know.  Only know that the boy is doing all right and the parents – who did not allude to the condition of their son’s leg – are hopeful.

That’s enough to make us smile.  And there is more from the parents:

“The nation of Israel is a great nation. Jews from around the world pray together with us and we feel this and it gives us and Yotam much strength. We are asking for you to keep praying…”

Please note here the total absence of bitterness and hatred in the parents’ message. That, too, is what makes us a great nation.

Also good news, of an entirely different sort, is that at long last we have taken out Samir Kuntar, a Lebanese Druze terrorist.  He was the worst of the worst – capable of a brutal and despicable act. In 1979, participating in a Palestinian Liberation Front terror operation, he came down from southern Lebanon into Israel, kidnapped a father, 31-year-old Danny Haran, and his 4-year-old daughter, Einat.  He shot Danny in front of Einat, then crushed her skull with the butt of his rifle.  The moral depravity of this behavior defies rational comprehension. 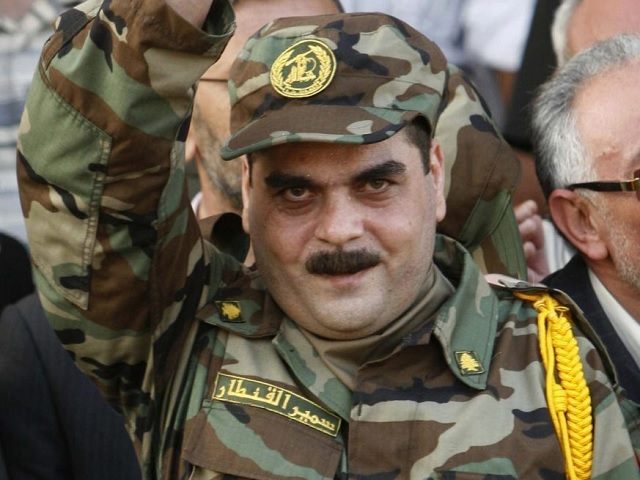 Kuntar was tried and imprisoned in Israel, but in 2008 was released in a prisoner trade with Hezbollah in Lebanon.  He then began operating with Hezbollah and was believed to have held a senior leadership position within that terrorist group.  Reportedly, he recruited Druze for Hezbollah.

Israel never directly claims attacks such as this one, but Syrian militia reported a direct Israeli strike that took Kuntar out on Saturday night.  The building he was living in, in the Jaramana neighborhood of Damascus, took the hit.

According to reports in Arab media, eight other terrorists – who were working on related terror attacks – were taken out with Kuntar.  In fact, it is being said that this was less vengeance for Kuntar’s past terrorism than it was a need to eliminate him because of what he was currently planning with his associates.

There seems a great deal of validity to this, for there are reports that Kuntar was no longer working for Hezbollah but had become an agent for Iran. According to Ely Karmon, senior researcher at the International Institute for Counter-Terrorism in Herzliya, Kuntar was part of an Iranian effort to set up a platform in southern Syria.

And yet, with this all, there is certainly a feeling on the part of many here that Israel has finally gotten someone who long deserved to die.  Smadar Haran, widow of Danny Haran, spoke of the alleged assassination of Kuntar as “historic justice” and the “closing of a circle.”

It comes as no surprise that there was (Katyusha) rocket fire directed at northern Israel from Lebanon hours after the Kuntar hit – at least three projectiles landed in an open field near Nahariya.   Israel, holding the Lebanese army responsible, shelled the area in Lebanon from which the rockets were launched.

But this is likely not the end of it, as Hezbollah vows retaliation, as do several Palestinian Arab groups.

Of course, both Syria and Iran condemned the assassination of Kuntar.  And so did Hamas, which called the killing of Kuntar a “heinous” crime and called upon the international community to take action against Israel.

Kuntar is to be buried in Beirut’s Dahiya neighborhood and it is anticipated that the funeral will be the focus for a Hezbollah terror rally – complete with Nasrallah addressing the crowd via satellite feed from his bunker.  The IDF is on high alert.

At the end of November, ostensibly in response to the Turkish shooting down of a Russian plane, the Russians declared that they had installed a battery of the S-400 ground to air missile defense system in northwest Syria.

If that system is up and operating (there have been some questions about this), there may be implications to be drawn regarding Israel’s action in Damascus.  Thus does Aaron Lerner of IMRA conclude “that the operation took place with the knowledge of Russia that jets would operate at specific locations within the S-400 envelope – and in this case in a route that passed through the area of Syria’s capital.”

Remember that Israel and Russian have a system of communication in place for coordination to avoid conflict in a variety of scenarios.  And so this could well be the case (although it still seems fairly mind-boggling).

However, Ely Karmon, cited above, suggests that Israel may have used long range missiles that did not require entering Syrian air space.

Most important however, says Karmon, is that the strike underscores Israel’s commitment to maintain full operational freedom and disrupt imminent threats to its security.

Nothing is official yet, but there have been high level bilateral meetings in Switzerland and it is looking likely that Israel and Turkey will resume diplomatic relations.

There had been unease about this possibility in several quarters:

But now the official response here to what seems to be on the diplomatic horizon has been largely positive.

Turkey has been given a face-saving out with regard to its demands that Israel lift the “siege of Gaza” – actually a legal maritime blockade.  Israel has no intention of lifting that blockade and allowing goods – which would include large quantities of weapons – to be brought in via the Mediterranean without being checked.  That blockade will stay in place, but Israel will allow larger quantities of goods into Gaza via land – above and beyond the very large quantities already permitted in daily. Thus will Turkey say the blockade has been “eased.”

For your information: on one single day – a fairly routine day – this August, 405 trucks carrying 12,966 tons of goods entered Gaza.

Many people have no clue that this is taking place.

The key here is diligent checking and stringency in terms of what can be brought in, e.g., regarding dual use products.  (There has been some tendency for Israel to be, shall we say, excessively forthcoming in what has been permitted through in order to demonstrate humanitarian concerns.) Even now Turkish aid to Gaza is arriving at Israel’s ports and being transported by land to Gaza.

And then – this is something most of us choke on because of the essential injustice of the situation – Israel will be providing a $20 million fund for the families of the Turks killed on the Mavi Marmara. They were killed in a defensive action when they viciously ambushed IDF naval commandos.  This is something Turkey demands and there is a face saving aspect here as well.

Pointing to a significant gain for Israel, Minister Ze’ev Elkin says the projected deal places “a heavy limitation on Hamas activity in Turkey”: Turkey will be required to expel Hamas leadership – most importantly, Salah Al-Arouri, who is a founder of the military wing of Hamas, Izz ad-Din al-Qassam Brigades, and coordinates Hamas activities in Judea and Samaria from his base in Turkey.

But perhaps the most hopeful aspect of renewed relations is the prospect of a major deal for Turkey to purchase natural gas from Israel.  This is potentially a multi-billion dollar project (that would ultimately involve the construction of a gas line) and, according to Energy Minister Yuval Steinitz of huge importance both with regard to further development of the Leviathan field in the Mediterranean (below), and bringing international energy firms back to Israel to look for new gas fields.

Turkey is dependent upon imports for its energy sources. As a result of its tensions with Russia, from which it has been buying natural gas, Turkey needs to find new sources.

Shoshana Bryen’s analysis of the situation – “When All Else Fails, Erdogan Looks to Israel” – is helpful (emphasis added):

“The restoration of relations with Israel is less a political reconciliation than an admission of the utter bankruptcy of Turkey’s last five years of diplomatic endeavor.”

There is gushing from some members of Turkey’s ruling party about the fact that Israelis are Turkey’s friends – they make it all sound terribly positive.  (With everything else, the Turks are eager to have Israelis as tourists to their country once again.)

But Dr. Daniel Pipes, president of the Middle East Forum, fears that Israeli leaders may be a bit naïve in their enthusiasm for this deal.  He sees strong Islamist influence within Turkey.  (We should note that even after the negotiations in Switzerland, Erdogan met with Hamas leader Khaled Mashaal.)

And savvy commentator Ruthie Bloom writes about “An ill-advised deal with the Turkish devil”: “…getting in bed with an Islamist is tantamount to the tale of the tortoise helping the scorpion across the river.  The deadly sting to the former is inevitable, even if the latter commits suicide in the process.”

A world in flux, sufficiently so to make the head spin.

Unfortunately, the terror is not abating.  On Saturday, three Israelis were stabbed by a terrorist in Raanana – one seriously hurt.  Yesterday, an Arab woman attempted to stab soldiers in Hevron before being shot and seriously wounded. And on it goes.  There have also been multiple IDF operations in which cells planning terror were apprehended before the fact.

I end with the song “Shomer Israel”: Guardian of Israel, watch over the remnant of Israel.

I do believe this may be Neshama Carlebach singing.