In this immediate context, news that reverberates positively in two respects (emphasis added):

“The combination of the innovative and entrepreneurial spirit of Israel and the unbelievable scale and resources of China will result in a great partnership.  Together we will create a major research institute that will help not only China and Israel, but mankind in general,” said Technion President Peretz Lavie at the groundbreaking.

And so we see not only a venture that is good for Israel in immediate terms, we see signs, once again, of Israel’s growing closeness to the far East.  I am absolutely convinced that our hi-tech expertise and spirit of innovation will make us a nation to which people turn more and more.

By way of example:  Also on Wednesday, Liberia’s senate president, Armah Zolu Jallah, was here – marking the first time that the head of Liberia’s parliament visited Israel. He came with thanks to Israel for assistance in wiping out Liberia’s Ebola epidemic.  That assistance encompassed setting up of mobile clinics, training of medical teams and visits by Israeli medical experts.

Jallah expressed great admiration for Israel, saying – to his counterpart, Knesset Speaker Yuli Edelstein (to the left of Jallah in the picture below) – Liberia “can learn much from you in the fields of innovation, technology, agriculture and medical research.” 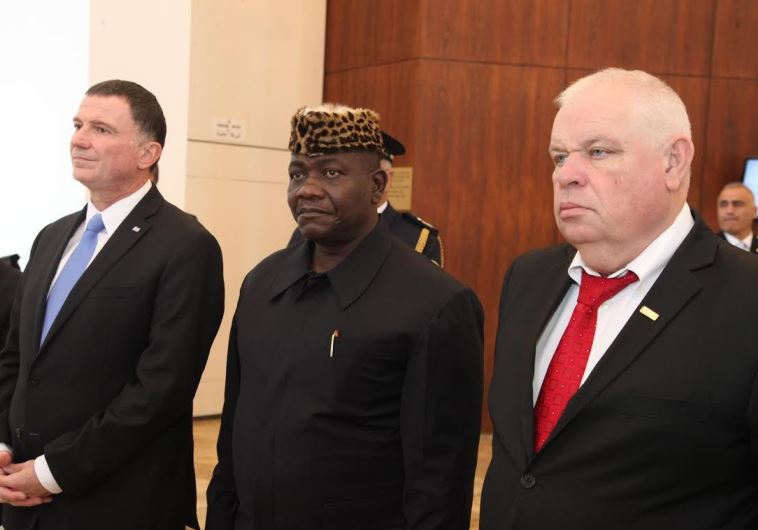 And there are significant signs of a new emerging alliance between Israel, Cyprus and Greece.  Two days ago, representatives of all three countries met here in Jerusalem, in part to plan a summit – in Nicosia, Cyprus – in which Israeli Prime Minister Binyamin Netanyahu, Greek Prime Minister Alexis Tzipras, and Cyprus President Nicos Anastasiades are scheduled to participate in January.

The three nations have many shared concerns  – including gas in the Mediterranean, migration issues, fighting terrorism, and water management – certainly enough to motivate a sense of needing to work together.  But this growing alliance has a complex background that also reflects upon that changing diplomatic terrain.

“The flourishing new relationship between Israel and her two Hellenic neighbors in the eastern Mediterranean – Greece and Cyprus – is important on its own merits. But equally important, the Israel-Greece-Cyprus alliance seeks to block Turkey’s ambitions of regional hegemony, while at the same time offering Ankara a key place in the new Mediterranean political order, if and when she comes to her senses. (Emphasis here in the original and added following.)

“Two events, apparently unrelated, yet interwoven in unpredictable ways, demonstrated last month that regional dynamics in the eastern Mediterranean are at a new and possibly formative stage.

“Turkey downed a Russian fighter operating in Syria, which raised fears of a broadening conflict, and placed two of the world’s most headstrong leaders on what seemed like a collision course. Meanwhile, despite his roots in the country’s traditionally anti-Zionist left, Greek Prime Minister Alexis Tsipras paid a short and warm visit to Israel. So did Cypriot President Nikos Anastasiades.

“When visiting Israel, Tsipras went so far as to recognize that Jerusalem is, and will continue to be, ‘the eternal capital of the Jewish People’ (while offering similar recognition to the putative Palestinian ‘state’).

“Both these visits, as well as the Russian conflict with Turkey, reflect – directly or by inference – aspects of the growing cost of Turkey’s vaulting ambitions under President Erdogan and Prime Minister Davutoglu.”

Feeling shut out as a result of the shifting dynamics, Erdogan – whose relationship with Israel has been cold to non-existent since the Mavi Mamara incident more than five years ago – has in recent days began making overtures to Israel, speaking about how a good Turkish-Israeli relationship would benefit the entire region.  This signals the possibility of a real shift on Erdogan’s part (and indeed there are reports that normalization of relations is on the horizon).  Whatever is going on behind the scenes, however, Israel’s public response has been appropriately cool (especially as Erdogan is still making demands regarding Israel’s naval blockade of Gaza and more).

Erdogan was undoubtedly motivated in part by statements made by a furious Putin regarding the fact that trade relations with Turkey could be severed, and replaced by commercial understandings with Israel.

Just yesterday, at a major press conference, Putin accusing Erdogan of overseeing a “creeping islamization,” and said he didn’t “see any prospects of improving relations with the Turkish leadership,”

It is believed that the announcement by Israel regarding the upcoming summit with Greece and Cyprus was timed to reassure these two countries that any normalization of ties with Turkey would not come at their expense.  This announcement also made it clear to Turkey that Israel has other options in the region.

Earlier this week, Egyptian planes entered Israeli airspace in the course of its attack on ISIS in the Sinai. This was reportedly with Israeli permission, and the fact that this is so marks a shift in our relationship with Egypt, as well.  We are on the same side, fighting common enemies.

I thought the perspective of this posting was important, after all the bad (and vile) news I’ve been writing about.  I will – I know I must – return to less palatable issues such as the UN, the EU, the PA, terrorism and more in my next post.

Today a terrorist came at members of the IDF with a knife outside of Shechem (Nablus) and was shot dead before he reached them.  We can call this a “quiet” day.

And so I circle around to two stories of victims of terror who have happy endings.

The first involves Naor Shalev Ben Ezra, a boy who was almost thirteen when he was attacked and almost died from his wounds.  You will remember this incident: this was the case of the young attacker whom Abbas claimed Israel had “executed,” when in fact he was being well cared for in the hospital.  Noar had been knifed in the neck and for a period of time he could not talk.

“I have prepared for this moment for a long time,” Naor told reporters on Thursday, “I didn’t think I was going to have a bar mitzvah after I was stabbed, but, baruch hashem, I feel like I am 90-95 percent better than I was before.”  His bar mitzvah was celebrated at the Kotel in the presence of hundreds.

Roi Kapach sustained very serious injuries as a result of a car ramming at Tapuah junction in Samaria last month and is currently undergoing strenuous rehabiliation.  He is shown here in his hospital bed with the soldier who saved him: 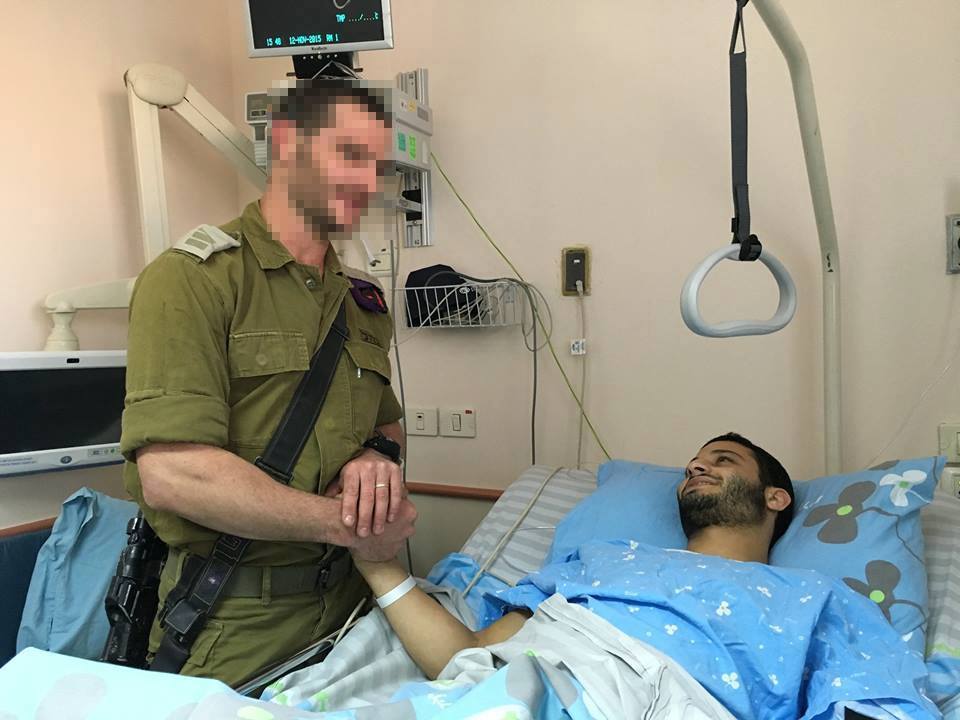 On Tuesday, he asked his girlfriend to marry him, and expressed hope that they will be able to dance at their wedding.

Gratitude, then, for life, and resilience.

We are going into Shabbat now, and so I offer the Maccabeats singing Lecha Dodi, which has mystical overtones and is traditionally the centerpiece of Kabbalat Shabbat – the service welcoming in the Shabbat.