Or perhaps I should ask, ARE they thinking?

As I write, the Mughrabi Bridge has been opened, on his orders.

One of the concerns, when the wooden  bridge was shut down, was that it was a fire hazard. So, guess what? There will be a fire engine stationed near the bridge at all time, in case it catches fire. 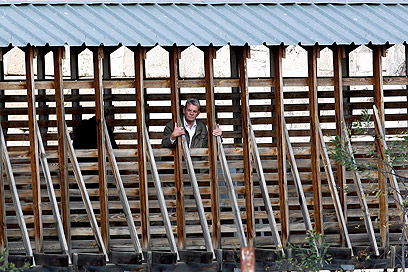 You don’t need to rub your eyes, to see if you are reading this correctly.  You are.

But this doesn’t address the fact that the bridge is said to also be in danger of collapsing.  What? The firemen will watch if it collapses and see if they can help any of the people who tumble down?

Reportedly additional repair work will be done on the bridge — although I have no sense of how quickly.  Seems there are plans to paint it with a fire-retardant substance,  and to shore it up so that it will not be so unstable.  But if this is the way the situation is to be handled — sidestepping for the moment the question of whether this is a wise way to handle it — does it not make sense at a bare minimum that no one should have been permitted on that bridge until that work was done?

Understand what we are seeing:

It is Netanyahu’s style to walk a tightrope, trying to please everyone at once.  Now this pattern has been carried to a painful extreme.

He hasn’t the courage to face down the war-mongering Arabs who threaten us and accuse us of all sorts of vile things, and to proceed with plans to replace the bridge.  But is under pressure from within Israel regarding the right of Jews to go up to the Mount.  And apparently he wasn’t interested in pursuing the option of the Chain Gate as an alternative.

What he has settled for is a ludicrous “compromise.”   And with this, he is doing two things:

At an immediate level, he is permitting people to walk that bridge when there is a risk to them that it might collapse. This is unconscionable.  The Jerusalem municipal attorney has been yelling about this very thing.  Some weeks ago, I read the comments of a tour guide who said she used to bring her clients up on the Mount, but she now declines to do so because the last time she used the bridge, she felt it shaking.

But in doing this, he has managed to undercut (or politically outflank) critics such as Rabbi Chaim Richman and MK Danny Danon, both of whom I wrote about yesterday, and both of whom were incensed by the fact that Jews were not being permitted on the Mount.  What is more, he has done it without the political battle with the Wakf that might have ensued (who knows?) had he tried to open an alternate gate such as the Chain Gate.

At another level, however, Netanyahu’s behavior has enormous repercussions for Israel.  I wrote yesterday about cowardice, and about this being a war over sovereignty.  Now our prime minister, showing himself vulnerable, has blinked.  This is no small matter.

He should have faced them down.

Unfortunately he was silent while Hamas and the PA were carrying on.  He should have called a press conference and stated Israel’s case:

He doesn’t know what all the hysteria is about. This bridge is on sovereign Israeli territory, and it is Israel’s right and responsibility to maintain it properly.  Any fabrication about Israeli intent to damage the Al Aksa Mosque is pure malicious incitement.  UNESCO had cleared the plans for replacing the bridge.  Officials of UNESCO, as well as officials of Hamas and the PA, know full well that the bridge replacement does not involve the Temple Mount at all.

Israel has two obligations: To ensure that Jews and other non-Muslims have continuous access to the Mount.  And to replace the wooden bridge to the Mughrabi Gate — which was considered only temporary when it was put up and is now unsafe — with a sturdy permanent bridge.  Israel fully intends to meet those obligations.

Israel’s intentions are only peaceful.  Therefore it is exceedingly regrettable that our responsible actions with regard to the bridge have been interpreted as “a declaration of war.”  War should never be mentioned lightly, but if war is intended by others, our armed forces are strong, and always prepared.

Then he should have seen to opening of the Chain Gate as a temporary alternative, so that Jews would not be prevented from going up to the Mount.  He should have ordered the demolition of the bridge and its replacement with a new sturdy one, according to plans that had been drafted.

And he should have sent out the troops into eastern Jerusalem and into Judea and Samaria, to immediately quell any rioting that might ensue from his decision.  The message should have been communicated clearly that Israel does not shrink from appropriate actions because of a threat of Arab violence.  When the Israeli government caves in the face of that threat, there is no end.  We are permitting them to be in a position of controlling us.

For the record, the meeting of the Knesset Committee of Internal Affairs is, as of today, still scheduled to meet on Monday to discuss this issue.

Jerusalem Mayor Nir Barakat is not at all happy with the prime minister’s decision, and the municipality put out a statement that read in part:

“The government’s helplessness in dealing with this hazardous and dilapidated nuisance at the heart of the Western Wall and entrance to Temple Mount is regrettable.”

Indeed regrettable.  And so, my friends, it is time, again, for Prime Minister Netanyahu to hear from us.

As always, I implore you to keep your messages to him courteous, and short.  No lectures, no history lessons.

The major issue is one of maintaining Israel sovereignty and not backing off in the face of Arab threats of violence.  Let him know that what he done, with his decision regarding the bridge, has weakened Israel and made her more vulnerable.

His other responsibilities include making certain that Jews have continuous access to the Mount, and ensuring that a shaky and dangerous bridge that might collapse is not utilized, even for a short period of time.

In light of all of this, it is clear that he should have proceeded with the original plans for replacing the bridge, arranging an alternate means of accessing the Mount while the work was being done — and that he should not have let Arab threats deter him from this appropriate path.  If Arab rioting ensued in eastern Jerusalem and Judea and Samaria, it should have been dealt with.

E-mail: Memshala@pmo.gov.il and also pm_eng2@it.pmo.gov.il (underscore after pm) use both addresses

And now let’s turn to the US president, Barack Obama.  He makes Netanyahu seem resolute and strong. Even wise.  It’s that bad.

It is unlikely that anyone reading this is unaware of the fact that a cutting edge US RQ-170 drone went down inside of Iran.  The Iranians claimed to have shot it down, but this is not the case because it is intact.  Apparently a malfunction brought it down (or there are suggestions it was jammed by equipment supplied to Iran from Russia).

The Iranians have it and have displayed it proudly.  And so there is available to them both intelligence and the technology for how to build such drones.  A serious matter.

According to Fox News, citing a US official, Obama “was presented with three separate options for retrieving or destroying the drone” — a special-ops team to retrieve the drone; sending in a team to blow up the aircraft; and launching an airstrike to destroy it.

However, Obama turned them all down because “it could have been seen as an act of war.”

Can you stand it?  I cannot.

The US is dealing here with the most dangerous nation in the world.  The means to prevent it from obtaining intelligence that compromises the US is available, and the commander-in-chief declines to use it??

I think members of the American intelligence community, not to mention the military, must be beside themselves. Certainly Israeli intelligence is aghast.

Former vice president Dick Chaney tore into Obama on this, saying, ‘The right response would have been to go in immediately after it had gone down and destroy it.  You can do that from the air and, in effect, make it impossible for them to benefit from having captured that drone…”

But we’re not done with the story yet.  What Obama did, making himself look exceedingly foolish, is ASK the Iranians to give it back.

That is something that will not happen.  Obviously.  Or, as Chaney said, perhaps after they’ve extracted all the intelligence from it they can garner and then send it back in pieces.  Ahmadinejad went on TV and bragged about having control of a plane that was once secret. He said, “The Americans have perhaps decided to give us this spy plane. We now have control of this plane.”

How can Obama look at himself in the mirror? WHAT was he thinking?

This is not an idle question.  Either he is naive and incredibly stupid.  Or his intentions will not bear scrutiny.

Pamela Geller, writing on Atlas Shrugs, pulls no punches. “Does Obama want a universal caliphate?” she asks.  In other words, which side is he on?

Everyone who is still thinking of voting for Obama the next time around needs to ask some serious questions with regard to this situation.  Is this someone you truly want sitting in the Oval Office?

Speaking of the Oval Office, I will end with some comments by Daniel Greenfield, writing as Sultan Knish, on Gingrich.  The name of his piece is “Anyone but Obama.”

“…Gingrich is better on the issues. Gingrich currently seems better under fire but everyone keeps saying that he’s bound to implode. We’ll see…

“Romney is probably a surer bet for winning the election…but I would be more comfortable with Gingrich in the Oval Office, because when the 3 AM call comes in, I don’t think he’ll work out a consensus and then bring the least controversial response to the table.

“Gingrich is a survivor who keeps bouncing back. He’s the dog with a ball who won’t let it go. There’s something admirable about that. It’s the attitude of a man who might be able to make it through the firestorm.”