“With the Approach of Pesach”

Pesach begins on Friday night, April 6 and continues through the following Saturday night.  Time for celebration and time to do little day trips (tiyulim) with family will allow me scant opportunity to post during the course of that week.  I do hope to post at least once more before the holiday starts, but I wanted to extend my wishes here and now to all:

Pesach marks our redemption from Egypt and the direct intervention of the Almighty in the process that lead to receiving of the Torah and the entering of the Land of Israel.  Its messages are inspiring and all-important.

May we be ever be mindful of the power of the Almighty in our lives.  May he watch over us at this time and always.  And may each of you, with your families, have a joyous, meaningful and kosher Pesach. 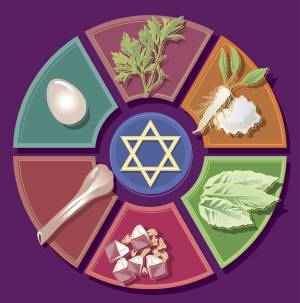 In the spirit of Pesach, and mindful of my prayers above, I share this magnificent and moving video, “V’hi She’amdah”:

(With a very special thanks to Malka H.)

Little Zakkai will undergo surgery on his spine and thoracic cavity this Wednesday, April 4.  His grandmother asks for the following prayers:

“No one has prayed for the doctors…pray that they will be healthy, and brilliant and very capable, and have nimble hands on Wednesday…and may they be blessed with being able to accomplish more than they ever thought they could when they try to remove as much as possible of Zakkai’s tumor…May they do no damage…”

For those wishing to participate in a tehillim cycle: http://tinyurl.com/7hka5ey

Last night I attended an Anglo Likud event at the Begin Center that featured two speakers who truly understand what’s what.  Their message, too, brings illuminates the theme of what is possible when we believe in ourselves, our strength, and what we are intended to be.

The first to speak was Professor Moshe Sharon, professor of early Islamic history at Hebrew University and the author of several books.

Sharon was the only Arabic speaker at the negotiations between Israel and Egypt.  At that time, Egyptian President Anwar Sadat, said to him in Arabic, “This is a market. Tell your prime minister.”  He was telling us, explained Sharon, to learn the language of the Arab bazaar, but we never have.

Professor Sharon then outlined the key principles of that bazaar.  The Arabs, he declared, use language with more sophistication than almost any other people, and have been doing so for 2,000 years.  But they use this skill in order to lie, and it works for them.  “Lying is the salt of a man,” goes an Arabic saying: as if man’s merit is in his ability to lie successfully.  And here they are attempting to sell something they don’t truly possess, for there is no peace in the Arab.

And yet Israel is ready to pay a great deal for that peace that doesn’t really exist.  Some rules:

1) Buy information and never give information.  Don’t present your program.  Let the other side show their program.

2) If they do show a program, say it is not enough.  Be prepared to pick up and leave.

A story. When Israel was negotiating with Egypt, President Carter pushed Begin to include Jerusalem in the negotiations. Begin said, “Give me five minutes.”  “Take as much time as you need!” enthused Carter.  “No,” explained Begin, “five minutes is all we need to pack our suitcases.”  The subject of Jerusalem was dropped by Carter.

3) Never provide a counter-program immediately.  Never present “creative ideas.”  Never cross your own red lines or depart from the full program you had proposed.  Never leave everything open to negotiations — some things should not be subject to negotiations.

7) NEVER show your plan to a third party.  Begin learned this the hard way. Thinking Carter a friend of Israel, he shared plans with him, and those plans quickly went to the Egyptians.

5) Do not become an anthropologist, concerned with Arab “honor.”  You also have honor.  Do not imagine that kissing on the cheeks and all the rest means something.

Sadat also said, “I gave Menachem Begin a piece of paper and he gave me the whole Sinai.  If the Arabs really want peace, they must give something in return.  Demand even more than they can give.

What Sharon warned is that we show too much eagerness for peace, and that the other side, perceiving this, keeps raising the price.  No different from, say, walking into a carpet store and gushing about how magnificent a particular carpet it — this immediately sends up the price. If the time should come when the Arabs sincerely seek peace, then they will see it as having value and be prepared to give something to secure it.

Then, Ambassador (ret.) Yoram Ettinger, a consultant on US-Israel relations, he served as Minister for Congressional Affairs to Israel’s Embassy in Washington, DC, and subsequently as Consul General of Israel to the Southwestern US.

Says Ettinger, “US presidential pressure has always been a part of the political scene.  The challenge of an Israeli prime minister is not to avoid pressure but to defy it.  The goal is not popularity but respect, which comes with defying pressure.”

From 1948 through 1992, saying “no” did not interfere with diplomatic and commercial interaction with the US.  Since 1992, the situation has changed, i.e., the Israel prime ministers have not been as strong in defying US demands.

Ettinger provided a host of examples, of ways in which Israeli prime ministers did defy the US.  What follows below are some major examples that he had provided in an opinion piece (http://www.ynetnews.com/articles/0,7340,L-3750386,00.html):

“In 1949, at the end of the War of Independence, the US Administration, Europe and the UN exerted brutal pressure on Prime Minister Ben Gurion to refrain from declaring Jerusalem as the capital, to accept the internationalization of the city, and to abstain from establishing facts on the ground. They also leaned on Israel to “end the occupation of the Negev” and absorb and compensate the 1948 Arab refugees.

“Ben Gurion’s response was immediate and appropriate. He declared Jerusalem the capital of the Jewish State, relocated government departments and agencies to Jerusalem, expanded construction all the way to the ceasefire lines, directed a massive number of Olim (immigrants) to Jerusalem and upgraded the transportation infrastructure to the city. Ben Gurion’s determination and defiance clarified to the US that neither Jerusalem nor the Negev was subject to negotiation. It accorded Jerusalem the space required for security and development for the next generation.

“In 1967, the US Administration and the international community threatened Prime Minister Eshkol that the reunification of Jerusalem, and any construction beyond the 1949 ceasefire line, would undermine severely Israel’s global standing. Eshkol replied firmly by annexing the Old City, the eastern suburbs and substantial land reserves and built the Ramat Eshkol neighborhood (beyond the ceasefire lines.)

“In 1970-1972, Prime Minister Golda Meir defied the (Secretary of State) Rogers Plan, which called for Israel’s retreat to the pre-1967 lines and for the transfer of the Old City to the auspices of the three religions. She laid the groundwork for a series of satellite neighborhoods around Jerusalem (beyond the “Green Line”): Neve Ya’akov, Gilo, Ramot Alon and French Hill. These neighborhoods provided Jerusalem with the land required for development until today.”