So, we start with the good.

There is a project called the Temple Mount sifting project.  It was founded in 2004, by archaeologists Dr. Gabriel Barkay and Zachi Dvira in response to the horrendous removal of tons of earth from the Temple Mount by the Islamic Waqf in 1999.  The Arabs who dumped this earth assumed, without a doubt, that they had disposed of much archeological evidence about the Temple.

But something very different happened. In the years since the earth was dumped, volunteer and professional sifters have have painstakingly gone through it, uncovering thousands of artifacts.

The most recent announcement came this week when segments of tile were reconstructed into a pattern that is believed to be from the Courtyard floor of the Temple in Herodian times. 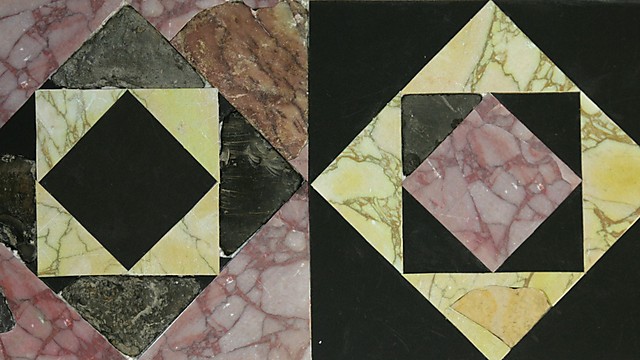 The tiles, prestigious and sophisticated, were composed of a variety of imported polished stones. “It enables us to get an idea of the Temple’s incredible splendor,” said Dr. Barkay.

What impresses me as much as anything else is the meticulous devotion of those who are doing this sorting and restoration work.

It doesn’t happen often, but sometimes we can win.  And the lesson to be learned here, I think, is that it’s always worth trying:

Recently, the “Palestinian ambassador” to the Czech Republic registered a complaint about an atlas used in the Czech school system that identified Jerusalem as Israel’s capital.  The Czech minister of education informed the publisher of that book that a change had to be made, listing Tel Aviv as Israel’s capital, or his books would no longer be accredited as official school books.

The letter said, in part:

”The friendship between our peoples has deep historical roots. After Jerusalem’s destruction, Jews made Prague the Jerusalem of Europe – a center of Jewish thought, history, and culture. Prague shaped Jewish life, and Jewish thinkers, writers, and artists shaped Prague…

“Future generations of Czech students deserve nothing less than the truth: Jerusalem’s rightful place as the capital of Israel, and the heart and soul of the Jewish people, cannot and should not, be denied.”

Great letter.  It made an impression upon PM Sobotka, who – much to his credit – has reversed the decision.

In a statement to Czech Radio, Education Minister Katerina Valachova’s said that Jerusalem would not be removed from the textbooks.  “Jerusalem is Israel’s capital from the viewpoint of the declaration of the country to which this relates, which means Israel,” Valachova said.

“Jerusalem is on the map!” exulted Barket, while praising the Czech government for not caving to Palestinian Arab pressure.

The decision to remove Jerusalem was particularly disturbing, because the Czechs have been our friends.  But in the end I think it is the fact that they are that allowed them to stand against the pressure.

Let’s see how long this holds. For now it is indeed good news:

”A new procedure set in place on Tuesday will make it harder for the civil administration to remove illegal settler structures.

””Until now, the civil administration had the sole authority to remove unauthorized modular homes and structures within 60 days of their construction…

For the last decade, the civil administration has often moved fairly quickly to remove new illegal settler construction within those first 60 days.”

And I will note, with no little shame, that “settler” construction has been taken down with greater alacrity than illegal Arab construction, that is back by the clout of the EU.

”The procedure has now been changed, with Defense Minister Avigdor Liberman (Yisrael Beytenu) handing the purview of such activity over to the Deputy Defense Minister Eli Ben-Dahan (Bayit Yehudi).

“Ben-Dahan has spoken out against such demolitions, and it is expected that his involvement in the matter will slow down the rate of the demolitions.

”On Tuesday, Ben-Dahan wrote a letter to the office of the Coordinator of Government Activities in the Territories to explain the new regulations, and to underscore that he must approve such activity before it occurs.

”He issued his directive after the civil administration destroyed an encampment of some 10 families on an otherwise empty hilltop in the Kiryat Arba settlement.”

When Prime Minister Netanyahu was in Holland, he was snubbed by a Dutch member of Parliament – Muslim, Turkish-born – who refused to shake his hand. But I rather like our prime minister’s response:

“We again saw today a clear example of who wants peace and who doesn’t. I will continue to represent Israel’s position with pride throughout the world and to strengthen its international standing. As [the late Likud] Prime Minister Menachem Begin once said, ‘he who snubs his nose will remain with a snubbed nose.’”

He handles himself with aplomb in situations like this.

On the flip side, Netanyahu was greeted most enthusiastically by a group of Christian Zionists. Even blowing of a shofar. See the video here:

Are we surprised?  A PA court has ruled that the elections scheduled for October must be postponed because of disputes about the lists.  Hamas is furious.

For your information only.

A group called Jewish Democrats for Trump has organized and is starting to do publicity, warning against the dangers of Hillary.

Donald Trump leads Hillary Clinton by 19 points — 55 percent to 36 percent — among voters who are currently serving or have previously served in the U.S. military, according to the latest NBC News|SurveyMonkey Weekly Election Tracking Poll.

I would suggest there are solid reasons for this.  On Wednesday, Trump unveiled his “Peace Through Strength” plan – he says that the US cannot be safe without a strong military:

“We want to defer, avoid and prevent conflict through our unquestioned military strength” That means “rethinking the failed policies of the past.”  (emphasis added)

I would say he’s absolutely right.  Obama gutted the military, firing some of the best commanders and cutting back across the board.  Trump wants to end the sequester, increase the number of active-duty military personnel and develop a state of the art missile defense system.

Here’s a bit of insight into Hillary’s thinking, from the Washington Times:

“Glossing over the 2012 terrorist attack in Benghazi that claimed the lives of four U.S. diplomats, Hillary Clinton on Wednesday night claimed that ‘we did not lose a single American’ due to military intervention in Libya.

“No Americans were lost in the military intervention itself, but the aftermath was a far different story. Four Americans were killed when the U.S. consulate in Benghazi was attacked by terrorists on Sept. 11, 2012, and Mrs. Clinton has come under intense fire for not taking greater security precautions for her diplomats.

“’They complicated the mistake, once they bombed the you-know-what out of Gadhafi. They made a terrible mistake on Libya.’”

Commentator Daniel Greenfield calls Hillary’s insistence that no Americans died in the action in Libya “staggering in its shamelessness.”

The same must be said, and much more, about what Barack Hussein Obama has done – it is so staggering, it could knock us down altogether.  Every revelation is followed by one even worse.

I’m waiting for America to notice.

[] You likely know the story of the $400 million in cash that was sent secretly to Iran by Obama as ransom money for American hostages that Iran was holding.  That was confirmed by the State Department by the third week of August.

[] Then came a report from the Institute for Science and International Security (ISIS) confirming that the US provided secret exemptions for Iran from the first day of the deal.

[] A couple of days ago, the information broke that there were three shipments of cash sent by the US to Iran, because “immediate” payment was demanded.  The total of these cash payments to Iran was $1.7 billion.  And Democratic senators who were queried said they had not been informed before the fact.

Omri Ceren writes: ”the $1.7 billion is not the first time the administration has facilitated the transfer of billions of dollars to Iran…it’s likely that Iran has secretly been getting additional cash payments over the last two years, as part of the administration’s diplomacy.”

Unraveling all of this is difficult, but there are Financial Services hearings into this: “Iran may have gotten tens of billions more in secret cash.”

Wrap your heads around this if you can.

And think really hard about what you want next for America.

Shabbat is coming. Here you have the Maccabeats doing Lecha Dodi, traditionally sung as we welcome in Shabbat.  Shabbat is greeted as a bride.