Nothing less will do…

Five days since the end of Rosh Hashana – which had been for me a time of spiritual high, offering a sense of my place in the world.  How badly I had wanted to hold on to that high.

I knew, of course, that there was violence on Har Habayit (the Temple Mount) over Rosh Hashana, violence that had actually begun before Rosh Hashana and then quickly spread to Muslim areas of the Old City of Jerusalem.

The violence was sparked when a decision was made by Defense Minister Moshe Ya’alon to block entry to the Mount by the Murabitun and Murabatat: male and female Islamist, which gathered on the Mount daily to intimidate and shout at Jewish visitors.  They have been paid by Hamas to do this.

Here is a video from last year that provides a particularly painful illustration of what has been going on.  Jewish fathers peacefully guiding their children, set upon by screeching Arabs and needing the protection of Israeli police at every step:

Know!  Please, that this obscenity, this outrage, had been occurring – not only regularly, but with increasing frequency and growing intensity.

The statement from Ya’alon’s office stated that he was convinced that barring these troublemakers was necessary to protect national security and public order. The Islamist groups’ activities “create a central component in the creation of tension and violence on the Temple Mount in particular, and Jerusalem in general.”

Ya’alon described the radicals as engaging in “dangerous incitement” against tourists, visitors and worshipers on the Temple Mount, which leads to violence and could put lives at risk.

“The Murabitun and Murabatat’s goal is to undermine Israeli sovereignty on the Temple Mount, change the reality and the existing arrangements, and harm freedom of worship. They are linked to hostile Islamist organizations and are directed by them.”  (Emphasis added)

Many of us breathed a sigh of relief when this announcement was made, for the harassment had gone on all too long.

I want to emphasize the importance of what is playing out here.  You do not have to be a fervently religious Jew who believes there will be a Third Temple on the Mount one day in order to grasp the deep significance of what it taking place: The challenge to Jews on the Temple Mount is meant to delegitimize Israel’s presence, to deny Jewish historical rights to their most sacred place. Drive Jews off of the Mount, and you have weakened Israel’s position.

Radical groups have long used invented threats to the al Aksa mosque on the Mount as a way of inciting Arabs against Jews.  It is a flash point.

And so, when these particular radical groups were banned, equally radical masked Muslim young men began to stockpile rocks, fireworks and pipe bombs in their precious al Aksa mosque, intent on making trouble on the Jewish holiday.  Their goal was to prevent Jews from coming up to the Mount over Rosh Hashana. 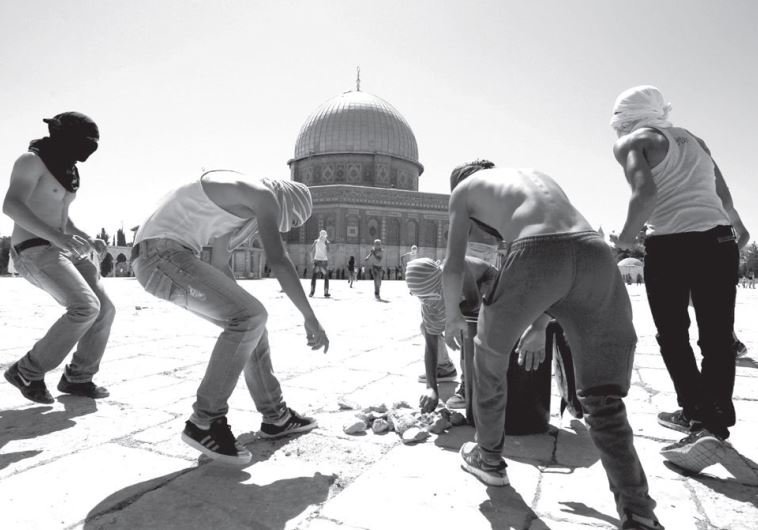 They made trouble, indeed.  Even border police were attacked. But it was contained: police used non-lethal methods and drove the rioters back into the mosque, where they were blocked in.  And so, Jews were permitted up over the holiday.  I was glad to learn this, when the holiday was over and I was again accessing the news (no radio, no TV, no computer over the holiday).

I think it’s particularly important to make sure that everyone understands that while the Muslims proclaim their religious devotion to the site, they are ready to use it for purposes of violence. Said Minister of Public Security Gilad Erdan (Likud), the rioters have turned the compound into a “warehouse of terror.”

What is more, charged Erdan, “I deeply regret the incitement and lies that the PA [headed by Mahmoud Abbas] and Arab MKs have spread about the Temple Mount.”

Note this: Arab members of our own Knesset participate in the lies.  No surprise to those in the know about the political situation – but it must be pointed out.

The violent mayhem resulted in one Jewish death late Sunday night.  Alexander Levlovitz, returning from a Rosh Hashana dinner, was bombarded by rocks thrown at his car in the East Talpiot neighborhood of Jerusalem.  He lost control of his vehicle, which ran into a ditch and hit a pole.  He died of his injuries in the hospital early Monday morning. 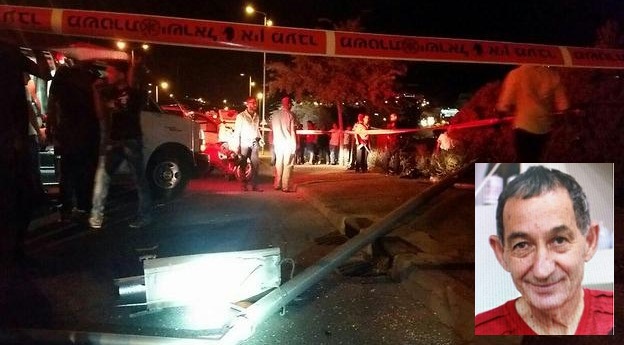 On Tuesday night, after the close of Rosh Hashana, Prime Minister Netanyahu called a security meeting in his office.  On Wednesday, speaking of a new level of deterrence, he announced:

“We are changing policy. The existing situation is unacceptable and we intend to give the tools – to both soldiers and policemen – to take very severe action against the rock throwers and fire bomb throwers.
http://www.israelnationalnews.com/News/News.aspx/200708#.Vf7wHpsVjIW

That process has begun, but is not yet fully in place, particularly with respect to when live fire may be used against those throwing rocks and firebombs.  The greatest concern is with regard to firebombs or rocks deliberately thrown at moving cars.  It must be considered that when this is done, the perpetrator had an intent to kill.

The violence continued through the end of last week, with  “day of rage” in Jerusalem called by Arab radicals on Friday.

A number of steps were taken by Israeli security in anticipation of this – including the calling up of 800 Border Police reservists.  And still there was violence, with three police officers wounded.  I believe an expanded contingent of Border Police will be retained in Jerusalem.

Today, according to Twitter, a rock (more like a boulder) was thrown through the window of a car, barely missing the baby within: 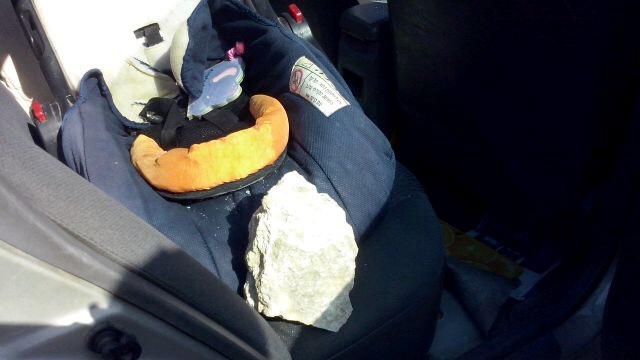 I have no additional information.

There is a great deal being said about the “status quo” on the Temple Mount, with the Arabs claiming that Israel wants to change it and permit Jewish prayer, while Netanyahu insists that he will retain it.

The “status quo,” my friends, is grossly unfair to Jews (and other non-Muslims):  Muslims have entry to the Mount all of the time (unless that entry is curtailed because of a security threat).  Non-Muslims (Jews, Christians and others) have very limited access – Mon. through Thursday, three hours in the morning, one in the afternoon.   Muslims have 10 gates by which to enter, non-Muslims have only the Mughrabi gate.  Besides stockpiling stones, and playing soccer (I am not joking), Muslims can freely pray on the Mount. Jews and Christians cannot.  They come only as “tourists.”

Talk about a howl of fury!

Now the Arabs are afraid Jews might start praying on the Mount. In point of fact, the High Court of Israel said Jews do have the right to pray there, but with a proviso.  If the police determine that their praying might cause a security risk, they have the right to forbid it.

And so, the police forbid it routinely, because it is guaranteed that there will be “unrest” if the Arabs see Jews praying.  Easier to deprive Jews of the right to pray at their holiest site, than to cope with a riot.

But that’s not what we have now, and our prime minister says he will retain that current policy – he insists that Jews, while not praying, be allowed to go up.

This week, Mahmoud Abbas said that Muslim blood shed for the Temple Mount is “pure”:

”…we are all here for the sake of Jerusalem, and I tell you frankly, a Palestinian state without Jerusalem will never be. The Palestinian state must have holy East Jerusalem as its capital, its capital which was occupied in 1967. All their steps, all these divisions – we will not allow them. Al-Aqsa is ours, the Church of the Holy Sepulcher is ours, it is all ours. They [Jews] have no right to defile them with their filthy feet, and we will not allow them.”

”Today the world is divided between those trying to undermine religious coexistence and those trying to protect it. By saying that the ‘filthy feet’ of Jewish visitors to the Temple Mount desecrate it, Mahmoud Abbas has now clarified on which side he stands.”

His point is of major significance:  There are those, frightened by the violence, who claim we have to give the Muslims who are rioting “hope,” via negotiations for a “two state solution.”

Mark it well: They do not want to share with us, they want us gone.

There have been multiple suggestions regarding building of a synagogue on one corner of the Mount, which is very large. Or alternating hours, with Jews up some times and Muslims others. There is a model for this at the Machpelah (Tomb of the Patriarchs in Hevron).  But they will have none of it because they want us gone.

It is to be expected, of course, but it is an unacceptable state of affairs none-the-less: Agents and governments in many quarters take that familiar ‘even-handed’ approach, advising both parties to “avoid escalating tensions.”  As if actions to quell violence are on a par with the violence itself.  As if there is no reason to call out the raging Muslims on their behavior, or to defend the rights of Jews.

In some cases fingers are pointed at the Israelis. The king of Jordan is especially good at this along with the PA.

Such is the world.  A world in which we are required to stand very very strong.

Yom Kippur, our day of greatest sanctity, begins at sundown on Tuesday.  I do not know if I will post again before that.  The days between Rosh Hashana are meant for contemplation and meditation and prayer.

Tomorrow I will be attending classes in preparation for Yom Kippur with two of my favorite teachers.

I took the time to write this because it is necessary to set the record straight.  Please, share the information in this posting broadly.

To all, I wish a tzom kal – an easy fast.  May we and all of Israel be sealed for a good year.