It’s a “normal” situation for us.  We win some, we lose some.

Yet, somehow, these last few days, that roller coaster ride seems to have more curves than usual.

Take the UN Secretary General, António Guterres. He’d been great lately: he made a statement against the PA youth center named for terrorist Dalal Mughrabi and demanded UN support be withdrawn.  It seemed amazing that the UN was doing this.

But then – oops! – on the 50th anniversary of the Six Day War, he lashed out at the “occupation” perpetrated by Israel, which has caused “displacement of hundreds of thousands of Palestinians and Syrians” and “fueled recurring cycles of violence and retribution.”

I think we are seeing a positive shift in the international diplomatic/political situation in certain respects (about which more immediately following).  The shift is real. But it does not indicate smooth sailing by any means.

Zingers of huge proportions are still possible at any time and we must stay prepared.  Read to the end, please.

The Foreign Ministry, under the instruction of Deputy Minister Tzipi Hotovely, has drafted a document called “Legality of settlement,” regarding Israel’s rights in the land.  It was a long time in process, but this document has been distributed to all Israeli embassies worldwide. Each embassy has been required to translate it into the local language and do distribution; that distribution is almost complete. 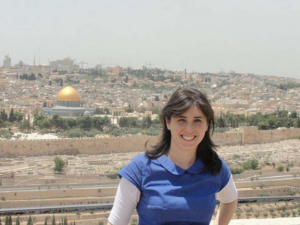 Prime Minister Netanyahu has been actively involved with his diplomatic outreach to Africa, which I consider to be one of the more successful and farsighted aspects of his administration.

As part of his “Israel returns to Africa” policy, he traveled to Monrovia, Liberia for an official state visit last Sunday. While there, he addressed the Economic Community of West African States (ECOWAS), which has a membership of 15 nations representing a combined population of some 320 million people.  Netanyahu was the first non-African leader ever invited to address the group, which he referred to, quite properly, as a “badge of honor for the State of Israel.” 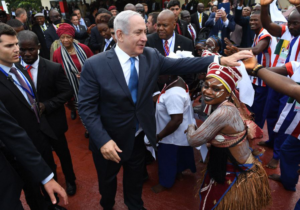 The big diplomatic success in Liberia came when Netanyahu and President Macky Sall of Senegal announced a resumption of ties after a diplomatic crisis that had stemmed from Senegal’s co-sponsorship of UNSC Resolution 2334 last December.

The Prime Minister also met with Ibrahim Boubacar Keita, the president of Mali, a Muslim country with which Israel has no diplomatic ties.  The two announced a “warming up” of relations.

After returning home, on Tuesday, Netanyahu welcomed Ethiopian Prime Minister Hailemariam Desalegn to Israel.  This is the “Africa Comes to Israel” part of the program.  Talks focused on agriculture and security.

The interaction was exceedingly warm, as Jews have a special cultural/historical link with Ethiopia. 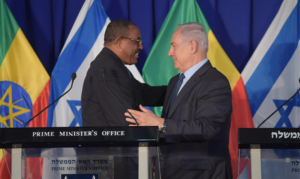 Netanyahu envisions an improvement in our diplomatic situation in international forums such as the UN as a result of closer Israeli-African ties.  While in Africa, he spoke to journalists about “this giant bloc of 54 African countries that is the basis of the automatic majority against Israel in the UN and international bodies.”  He seeks to dissolve that automatic voting majority.

You might like to see Herb Keinon’s analysis of why we should care about improved ties with Africa.

US Ambassador to the UN Nikki Haley, an ardent defender of Israel, arrived here on Wednesday for a three day visit. Needless to say, she is being given a most warm and enthusiastic welcome. 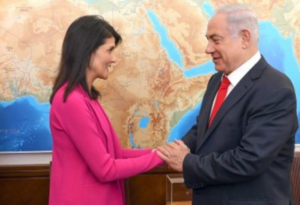 There is one item with regard to her discussions with Netanyahu that I think merits attention:

Apparently Netanyahu and Haley discussed a strengthening of UNIFIL, the United Nations Interim Forces in Lebanon, to make it possible to remove Hezbollah forces from south Lebanon.  This is in accordance with UN Security Council Resolution 1701 of 2006, passed at the end of the Second Lebanon War.

That our prime minister is seeking a strengthening of 1701 now is not inappropriate, although it is certainly futile.  He raises the issue because he knows we have a friend in Haley, and because putting the issue before the Security Council now is a wise move. In the event that we go to war again (i.e., when we go to war) and we are forced to hit missile launchers hidden in private homes, which would surely be the case, we will able to point out that we sought to ameliorate the situation.

Mention of this resolution, however, raises my blood pressure all over again.

Ehud Olmert was prime minister in 2006, and Tzipi Livni was foreign minister.  In that position, she was involved in the negotiations for 1701.  She called it a “diplomatic victory,” and practically broke her arm patting herself on the back.  But it was a disgusting scene, from beginning to end, and I have no doubt that Olmert played his own role in this.

At the end of the war, Hezbollah had been pretty solidly routed by Israel.  The essence of 1701 was that Hezbollah was not to be permitted back into south Lebanon – not south of the Litani River, near the border with Israel or in close rocket launching range of Israel.

UNIFIL was charged with monitoring the situation so that Hezbollah could not reassert itself and weapons would not be smuggled to this terror organization across the Syrian border.

But it was a farce of huge dimensions.  UNIFIL, I learned years ago, only operated during the day, while all weapon smuggling from Syria went on at night.  And UNIFIL, devoid of independent power, had to take its orders from the Lebanese army.  (Today, Hezbollah and the Lebanese government are for all purposes one and the same; back then the linkage was less obvious but it was there.)

And so, with a powerless UNIFIL standing guard, taking orders from the Lebanese army, Hezbollah returned to the south of Lebanon, and now has some 100,000 rockets.

There are all sorts of lessons here with regard to poor diplomacy, and placing trust where it should not be placed.

Having covered a number of diplomatic upswings, and good news situations, I must move to a diplomatic/political situation that has the potential to be a real downer. I hesitate to use this metaphor yet, because I am truly not certain of how things will play out. But in the picture of that roller coaster at the beginning of this post, the car is heading down….

I’ve been alluding for a while now to unsubstantiated reports regarding what is going on in Area C of Judea and Samaria, with the possibility of major “good will gestures” and concessions.

It’s fine to refer to those unsubstantiated reports, as a signal of what might be going on. But I don’t like to rely upon them exclusively – especially as one report is different in its particulars from another.  It is clear that something is going on:  But it has been near impossible to secure reliable verification of the specifics.

All of these rumors have to do with Area C, over which Oslo gives Israel full control.

The concern is that the PA not co-opt parts of this Area, creating a de facto state, or weakening Israel in Judea and Samaria.

Various reports suggest the possibility of Israel ceding part of Area C to the Palestinian Authority so that it becomes B.  Or, the possibility of large numbers of illegal Arab houses already built in Area C being allowed to stand when they should be demolished.

There is talk about construction of an Arab-only industrial zone in Area C near Area B in the Hevron region.

In some places there have been allusions to 20,000 Arab buildings in Area C.  A huge number, but it is not clear what this refers to.

We know that there was a Security Cabinet meeting before the arrival of Trump and that certain “good will gestures” were approved then. (Some did not involve land, but rather such things as keeping the Allenby Bridge into Jordan open longer hours.)

Only the two Bayit Hayehudi faction members in the Cabinet voted against the package of “gestures”: Education Minister Naftali Bennett and Minister of Justice Ayelet Shaked.

It also seems to be the case that Finance Minister Moshe Kahlon met with PA Prime Minister Rami Hamdallah, to work out details of what had already been agreed upon by the Cabinet in principle.  Part of the problem is that details of that meeting came, unreliably, from the PA and not from Kahlon’s office.

What I have so far:

►There is substance to reports that building permits will be provided to Arabs for infrastructure – public structures such as schools – in Area C.

►Additionally, there is considerable pressure being brought to bear on our government to issue housing permits to Arabs who live in Area C.  The best figure I’ve been able to secure is that some 150,000 Arabs live in villages in Area C, while there are over 400,000 Jews.

What is of very great concern is that there has been a de facto freeze or near freeze on housing for Jews in Judea and Samaria for some time.  Netanyahu says he’s going to build, but we need to see it.   The announcements coming out are for relatively small numbers of units – perhaps 2,500 or 3,000.  And so, with an extensive “good will gesture” there might be a very troubling imbalance.

►There is no substance that I have uncovered to reports that Israel will cede part of Area C to the PA.

►Nor have I discovered any substance to reports that Arabs from Area B are being permitted to move to Area C, although I know that some do so, surreptitiously – and then build illegally.

Now as to why this is of such concern:

Today it made news that Abbas says he’s willing to forgo demands that Israel freeze building before going to the negotiating table.  He will also back off from condemnation of Israel in international forums.  This is a switch for him.

Why did he do this?  To give the new US administration a chance to make peace, he says.  Yea, right.

The simple reality is that the PA is hurting badly financially, and so when Trump squeezed him on these concessions (squeezed him undoubtedly far harder than previous presidents have), he felt he had to agree.

Please note that these are rather painless concessions for Abbas: he has not said he will stop paying terrorists salaries or stop inciting against Israel – things his own people would not tolerate but that might mark real as versus cosmetic concessions.

I do not consider this good news.

Because Trump is also squeezing Netanyahu. And as he secures concessions from Abbas it makes it more difficult for Netanyahu to stand strong.

But our prime minister must stand strong. And we must stand with him.

I will, of course, return to this.  You will have further information as I secure it.

If it turns out to be true, as some believe, that what Trump cares most about is making that “deal,” then we will have our work cut out for us.  Fervently do I hope this is not the case.

It’s certainly not all grim.  We some have strong people in the government and the Knesset today, some of whom are saying it’s time to apply sovereignty over Judea and Samaria, or at least Area C.

So, even if we swing down, if we keep going, we will, please Heaven, go back up again.