I have promised myself that I will attempt to stay cool as I research and report on world events.  Not unsurprisingly, agitation takes a real toll on me.

Have been doing great, but then I read what Kerry said yesterday in Valpariso, Chile, where he was giving a talk:

“Regarding Jerusalem, it absolutely is unacceptable on either side to have to have violence resorted to as a solution.

“And I would caution everybody to be calm, not to escalate the situation…it is very important to maintain a sense of calm that will minimize the instinct for escalation.”

Let me get this straight:  Arabs are killing Jews, but our government should not ratchet up the response to the terrorists?  And whatever we do, we should not use violence in persuading those terrorists to stop what they are doing?  We should, maybe, reason with them? Offer them perks if they stop?

This is moral equivalency run amuck.  Politically correct thoughts from an empty head.

What it illustrates is the breath-taking international bias against Israel that we must contend with.  No calling out the Arabs for their execrable behavior.  No recognition of Israel’s right to defend her Jewish citizens.  It helps us to understand (though not excuse) some of Netanyahu’s reluctance (until now) to take a strong stand against Arab terrorists.

In terms of that new stand by Netanyahu – which surely represents a stiffening of the spine, we have been informed of the following:

[] security reinforcements throughout Judea and Samaria and Jerusalem to continue as needed, with several hundred more officers slated to be added to patrols

[] administrative detention orders to be levied against rioters

Saturday night, after the attack, Arabs were blocked from entering the Old City.

[] charges to be brought against Arab Israelis who witnessed the stabbing attacks on Rabbi Nehemia Lavi and Aharon Benita and his family on Saturday, and who beat and ridiculed Adele Benita

With regard to this last item:

Adele Benita told a blood-curdling story that everyone needs to know:

“I ran for dozens of meters with a knife in my shoulder, bleeding. Arabs in the area who saw this horrible scene clapped and laughed, and told that they hoped for my quick death. I felt I was about to faint…I yelled for help and they just spat at me…I tried to hold on to someone who passed by, and they just shook me off and kicked me, and said ‘die.’”

And so, we cannot say that it is just one “lone wolf” terrorist here and another there that we are contending with.  We are coping with deep hatred on the parts of Arabs in our midst.  Charges against them?  How about removing their citizenship and banishing them?  As I understand it, from one report, these were, at least in part, local Arab shopkeepers.  Netanyahu is seeking to close their shops.

Netanyahu, with Gilad Erdan, Minister of Internal Security, went to visit Adele Benita in the hospital, and was deeply incensed by what he learned first hand. 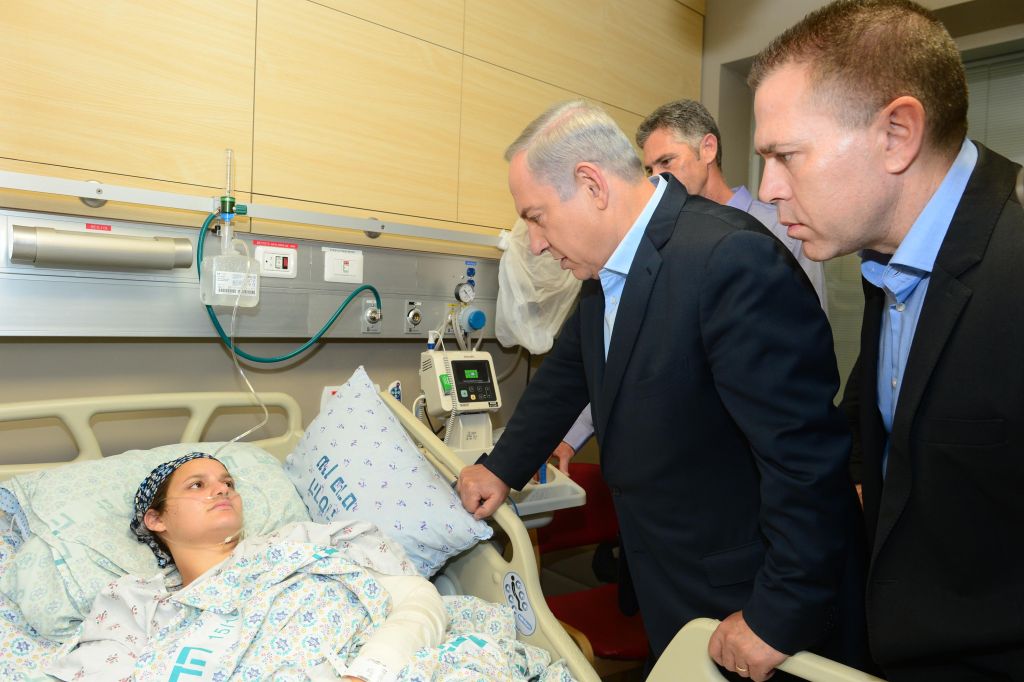 He also went to see Matan, Adele’s young son, who was injured:

In addition, Netanyahu is seeking:

[] swift adoption of minimum sentences and fines for minors who throw rocks and firebombs, with charges to be brought against their parents as well

[] speeding up the process for demolition of terrorists’ homes

Justice Minister Ayelet Shaked (Habayit Hayehudi) has been charged with establishing a mechanism which would significantly shorten the legal process.  Already a couple of homes have been taken down.  See http://www.israelnationalnews.com/News/News.aspx/201455#.VhPj2puhfIU.

This is an action that is overdue.  Some of the Arab MKs have been inciting violence.

Today, Netanyahu told reporters the country’s top security echelon had decided to “significantly increase active protection” on Israel’s streets.  There are plans for cameras installed along highways throughout Judea and Samaria backed up by aerial surveillance monitored by command centers.


“The intention is to use all means available to the State of Israel — it’s a very powerful nation in terms of its army, its security forces and its technology — to significantly increase its security on the streets.”

He says he has given full support to the army to crack down on terror.

This last is perhaps the most important.

Is all of the above sufficient?  We will have to wait a bit and see.

In various quarters I am sensing discontent – a desire to see the Palestinian Arabs truly vanquished once and for all.  As I have indicated before, it is not yet time for this, although I believe the day will come.

Right now, I think the prime minister requires our support, as he confronts this situation, and not back-bench criticism.

In the face of the increased security response by Israel, Mahmoud Abbas of the PA is now saying that he does not want an escalation of tensions with Israel, and has advised PA security and political movements of this fact.

His statement on the matter declared that his people should refrain from violence in order to deny Israel the pretext for a West Bank crackdown. This is typical Abbas.  At no point has he condemned the Palestinian Arab terrorism that has taken innocents Jewish lives.

The question now is whether he has sufficient control to reign in the violence, even if he truly wants to.  His incessant incitement, particularly with regard to the Temple Mount, did a great deal to unleash it in the first place.  Having done this, can he undo it?

The hostility of the Arabs in the Old City that I described above is one sign of what we are dealing with.

And then we have this, which perhaps tells us all we need to know:

“A newborn Palestinian Arab baby has been named in honor of the Arab terrorist who murdered two Jews and wounded three others in a stabbing attack in Jerusalem’s Old
City on Saturday night.

“Nineteen-year-old Islamic Jihad terrorist Mohammed Shafik Halabi attacked a young Jewish family in the Old City, repeatedly stabbing the parents and their infant child before attacking another civilian, snatching his weapon and firing on police and tourists in a frenzied attack.

“According to Palestinian Media Watch (PMW), the baby bearing Halabi’s name was born in Gaza just hours after the attack in which Aharon Benita and Rabbi Nehamiah Lavi were killed.

“Halabi was lauded in Wafa’s report as a ‘hero of our people’ who had been ‘assassinated by the army of the occupation.’

Also according to Wafa, ‘while still in the hospital, the mother of the baby called the mother of Martyr Halabi…during the phone conversation, the two mothers cried from joy.’”

I close today with a strong and optimistic message from Sherri Mandel, who has suffered her own tragedy via terrorism, but continues with remarkable resilience and hope (emphasis added):

“…On Saturday, as part of the Sukkot Shabbat service, we read Kohellet, Ecclesiastes, which claims that there is nothing new under the sun. Unfortunately, the nefarious ways of our enemy is not a new story.

“The media is about what is new. They seek the latest trend, fad, happening. They can’t make sense of something with a long history.

“But we Jews can. We know what our tradition tells us: that as soon as the Jewish people left Egypt, the enemy Amalek attacked those who were weak, the stragglers. Our enemy still targets the weak: young families and children. This summer, Danny Gonen, a young man, was driving and was waved down by a Palestinian who seemed to need help. Danny was murdered as a result of his kindness. Hamas welcomed the killing calling it excellent and heroic.

“As King Solomon says in Ecclesiastes, what is crooked cannot be straightened.

“So we have to continue to fight an enemy that refuses compromise, refuses to recognize our rights to our holy land, an enemy that seeks and celebrates our deaths.

“But we have not changed either. On a day when the army is out in full force, when Nehemia Levie and Aharon Benita are buried, there is also a prayer service at the site of the killings in the Old City. We call to God to help us, to give us strength and to listen to our prayers, to redeem us in the merit of our courageous ancestors.

“For we must remember that we are a people with tremendous courage. We will not succumb to terror. While this is an old story of our enemies attacking our vulnerable people and celebrating their deaths, we Jews embrace another old story: a story of courage, survival and redemption.” 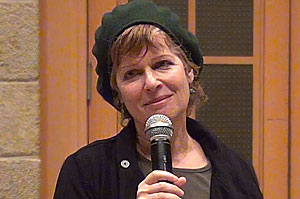