Prime Minister Netanyahu approached the podium at the UN this week with courage and determination.  He spoke with impeccable logic and eloquence.

(If you would like to see a video of his talk:  http://www.youtube.com/watch?v=CCDcdnEjJHA )

Following his talk, he remained in the US an additional day in order to give numerous media interviews on the subject of the dangers of Iran and the necessity of fully dismantling its nuclear capability.

In other words, he is putting out that maximum effort to alert the world to a critical danger.

In many quarters here in Israel his words were received with high praise (all emphasis below added).

Wrote Boaz Bismuth in “The speech the world needed to hear”:

“Prime Minister Benjamin Netanyahu did not go the United Nations with a set of gimmicks. The prime minister chose a serious, tough and disillusioned speech; almost extraordinary during a time when the world seems to be more interested in fantasy…Netanyahu took it upon himself on Tuesday to do the unpleasant thing and show us the harsh reality that is the Iranian nuclear program.

“It was not the speech the world wanted to hear, but it was the speech it needed to hear. Netanyahu was not looking to make friends in his speech Tuesday. He was looking to give the world the truth — and the truth sometimes hurts. Clearly, the world would rather live in the Iranian bubble, which Netanyahu came to burst Tuesday.”

While it is the opinion of Dr. Haim Shine, in “Historical insight” that:

Netanyahu’s words are in no need of interpretation. His statements were clear and decisive. Their purpose was to make it clear to the Iranians that the State of Israel has the ability to deal with their nuclear program on its own, and will not hesitate to use the full extent of its power…

“In my view, Netanyahu is emerging as perhaps the only prime minister since the late Menachem Begin, who, in addition to pragmatism, has historical insight. He possesses a basic and fundamental understanding of the meaning of the return to Zion in the modern era.”

But it’s here in Israel that he’s been most highly praised.  We understand where he is coming from.  And even here there were pockets of criticism on the left – e.g., from Shelly Yachimovich, head of the Labor party.

Yes, there has been praise in other places.  I was surprised to see that Alan Dershowitz had exceedingly good words for him — calling his speech one of the important ever delivered at the UN.

The NY Times – unsurprisingly, considering its recent positions on Netanyahu – referred to his “aggressive speech” replete with “combative words.”

“…it could be disastrous if Mr. Netanyahu and his supporters in Congress were so blinded by distrust of Iran that they exaggerate the threat, block President Obama from taking advantage of new diplomatic openings and sabotage the best chance to establish a new relationship since the 1979 Iranian revolution sent American-Iranian relations into the deep freeze.”

What disturbs me the most here is that the Times is often a mouthpiece for Obama.

The president himself is attempting to play it “cool” and not take a combative stance against Netanyahu’s position.  Jay Carney, White House press secretary said on Tuesday:

Netanyahu’s skepticism of Rouhani was “entirely justified…This is a country whose leadership, until recently, was pledging to annihilate Israel.”

Sounds gracious, doesn’t it?  But it isn’t.  Implied here is that Iranian leadership, now with Rouhani in the president’s seat, is no longer threatening Israel. But, gee, it will take Netanyahu some time to catch on to this new state of affairs.

But there is no new state of affairs.  Not in terms of attitudes demonstrated beneath Rouhani’s charming words. Just before Rouhani came to the UN to deliver his conciliatory words, in his country a military parade was held:

On the lead vehicle of a line of trucks transporting Shahab-3 missiles, there appeared a banner that reads: ‘Esraail baayad az beyn beravad’ – “Israel Should Cease to Exist“… 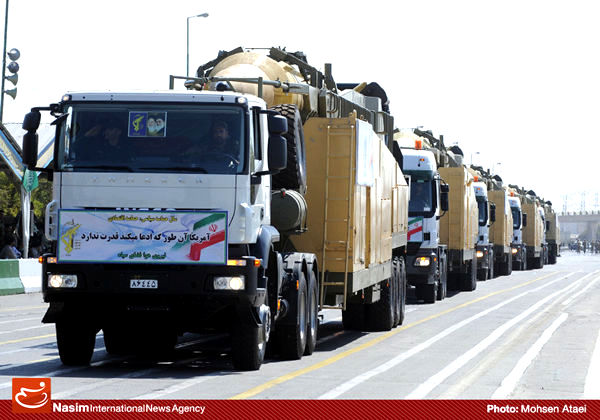 Darn right, Netanyahu’s skepticism is entirely justified.  But there’s no way that Obama is on board for this realism.

Of great concern, in addition to this, is the position the European community seems to be taking. First EU foreign affairs head Catherine Ashton made a pathetic, appeasing statement about wanting to project a positive attitude in negotiations with Iran.  Tough talk – carrying that big stick – simply is not politically correct in this new world order.  Heaven help us.

And now Lithuanian Foreign Minister Linas Linkevicius, who currently holds the rotating position of EU president, has announced that Western governments are thinking of reaching a deal with Tehran that would allow some enrichment of uranium to continue (ostensibly for peaceful purposes).

This is precisely what Netanyahu warned against, saying if the Iranians have access to some enriched uranium they will have the ability to parlay this into development of nuclear weaponry.  And so it’s clear that many national leaders have no desire to heed our prime minister’s words. .

This is of a piece with Kerry’s position, that I last wrote about. Confronting Iran is just too tough, too uncomfortable – better to make believe.

We cannot fix all of this.  That repair lies with Heaven.  But there are some things we can do, and I believe each of us must put out our own maximum effort at this time.  This is especially so with readers in the US.

We delude ourselves if we imagine we can affect the Obama administration directly. The goal is to reach the public and  elected representative in Congress.

Familiarize yourselves with Netanyahu’s major points.  The full text of his speech is here:.

Keep it for your reference and to share as appropriate.

1) Let your elected representatives in Congress know that you are demanding a US position that requires full dismantling of Iran’s nuclear capacity – that you consider anything less to be foolish and dangerous.

Additionally, represent this position wherever you can.  Write letters to the editor. Do op-eds in local papers. Talk about this with associates.  Do talkbacks on the Internet.

Very shortly I will be switching gears, because Prime Minister Netanyahu will be delivering his Bar Ilan talk on Sunday. This one addresses the situation with the Palestinian Arabs and not Iran.  And the prospects have many people uneasy.

Violence on the part of the Arabs in this area (both Israel citizens and those coming out of PA-controlled areas) has already increased and the Arabs are predicting a third intifada if there is no agreement reached (which is going to be the case).

As I have already indicated, there is considerable talk about an “interim” agreement. But Tzipi Livni, negotiator for Israel, says she’s working towards a final agreement and has nothing regarding an interim understanding on the table.

In his UN talk, Netanyahu devoted about two minutes to this subject.  He says he is prepared for concessions for true peace, but will not compromise Israel’s safety.  If he is serious on this, there will be no compromises, because he knows very well that the Palestinian Arabs are not serious.  Reports are that – much to the frustration of the PA – Israel is refusing to discuss borders and is focusing on security.

But just tonight I heard from someone who has contacts inside the government, that the prime minister does not want to appear too negative, too much of a naysayer, on this issue after how strong he was on Iran.