When I speak of integrity, I am referring to soundness, state of being whole.

For Israel as a nation, this applies to a great many situations.  We have a regrettable and maddening tendency to turn ourselves into a veritable pretzel — as we seek to disprove a charge against or to satisfy demands leveled at us — rather than remaining true to what we know we are.

My reason for raising this now is because the issue of the rebuilding of the Mughrabi Gate bridge has come to the fore once again. 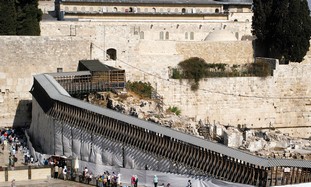 I’ve written about this in the past, but here is the story once again:

The Mughrabi Gate is the only entrance to the Temple Mount utilized by non-Muslims; it is the entryway for Jewish Israelis, tourists who are Christian and Jewish, and Israeli security forces who need to have access to the Mount at times of emergency.  The Gate is on the right side and at the top of the Western Wall.

Prior to 2004, a sand embankment led to the Gate; but that year a combination of severe weather forces caused it to collapse. Israel quickly constructed a covered wooden bridge — which is what is pictured above — so that there would be access to the Gate.  It was intended to be only temporary.

Quickly thereafter, plans were put in place by Israel for a permanent bridge of glass and steel of some considerable dimensions.  That plan was dropped because of fear by archeologists that damage would be done to the adjacent archeological park, through which it was to run, and because of an inadequate approval process.  Subsequent plans have since been established for a permanent bridge to the Gate.

Everything is in order:

In the summer of 2007 legally mandated archeological rescue operations took place, ensuring that anything of archeological value in the path of the projected bridge be rescued and preserved.  This work, which required excavation, was done with complete transparency.  Cameras permitted transmission of live pictures of the work being done.

And international organizations were invited to come observe the archeological rescue operations.  A team from Turkey came, and most notably one from UNESCO, which reported that, “no work is being conducted inside the Haram es-Sharif [Temple Mount], nor is there anything in the nature of the works being performed at this stage that could constitute a threat to the stability of the Western Wall and the Al-Aqsa Mosque.”

Additionally, Jordan was invited to participate fully in the planning.

Was this attempt to pacify the situation successful?  A rhetorical question.  For passionate objections from Muslims are founded not in serious concerns, but rather an opportunity to incite against Israel.  Thus, as described by Nadav Shragai, we saw the following:

At the time of the rescue operation in 2007, the Islamic radical Sheikh Raed Salah, head of the northern branch of the Islamic Movement in Israel, instigated riots, declaring:

“Whoever is playing with fire should know that the fire will consume him. Whoever schemes to destroy the al-Aksa mosque will have his house destroyed.”

Destroy the al-Aksa mosque?  Not for a second does he believe this is what Israel intends. But this is his ploy, utilized frequently in order to inflame Israeli Muslims.  Nothing works as well as saying that Israel intends to destroy their most important mosque on the Mount.

Khaled Mashaal, head of the Hamas politburo, participated in this inciteful charade, telling a press conference that, “Israel is perpetrating a new attack on al-Aksa mosque.”

And, let it be noted, the bureau chief for PA president Mahmoud Abbas said:

“The Palestinian Authority will provide every assistance to the struggle against the Jewish excavations under the Temple Mount.”

That is the totally fallacious (and, considering Jewish sensibilities, illogical) claim: that Israel is digging under the Mount with the intention of bringing it down.

An aside here, before continuing the story.  This statement from the PA provides evidence of the fact that it will never take a moderate stance.  Quite simply, the political rhetoric of the Palestinian Arabs is radical. If the PA diverges too far from this, it is lost.

Just this year, Jordan, in a total reversal of its earlier position, withdrew from cooperation with Israel on the planning of the bridge.

Jordan’s Hashemite king is growing increasingly weak on his throne and we’ve seen, accordingly, his movement towards a more radical stance as a protective measure.  He too, at this point, I suspect, cannot diverge from the radical line and survive.  But Jordanian withdrawal from the project, Shragai tells us, caused enormous unease in Israel.

In addition to all of this, the Wakf has charged that the bridge belongs to Muslims and Israel does not have the authority to make plans for its construction.

And here, I think, we come to the heart of the matter.  Yes, there are attempts to utilize the situation for incitement. But there is more: this is a challenge to Israeli sovereignty.

The Wakf, or Islamic Trust, over which Jordan has influence, has day-to-day authority for the administration of the Temple Mount.  (Itself a deeply regrettable situation.)  But the bridge to be constructed is not on the Mount, it is on sovereign Israeli territory.

Everything moves slowly here in Israel — especially when there are legal challenges by left wing groups.  But the Western Wall Heritage Fund, which will oversee bridge construction in coordination with the Antiquities Authority, received necessary permits in March of this year; the Ministry of the Interior has signed off on it.  Additionally, the Jerusalem District Court has upheld the legality of the plan.

And yet, nothing has happened.  Seems that the prime minister’s office, which has to give final approval because of the political sensitivity of the situation, has not yet done so.

Back in late May the municipal engineer declared the bridge unsafe and in need of being torn down.  But according to a May JPost article, an official with the prime minister’s office, “said one safety concern is avoiding playing into the hands of extremists who would use any change in the site to stir up tension.”

How devoid of integrity is such a statement!  Integrity in terms of our sense of our own sovereignty and our own rights.

Does the prime minister’s office presume that every time extremists threaten to stir up tension we must refrain from what distresses them?  The proper course of action is to go ahead, certain of our right to do so, and take down that unsafe bridge and build the new one.  If they riot, send out trained riot troops with non-lethal weapons that can disperse them.  To act otherwise is to compromise our sovereignty and our deterrence power.

Fighting the fight against the Jerusalem Municipality, which wants to see the construction begun, is Attorney Kais Nasser, who represents the Council for Muslim Interests in Israel.  The challenge that was brought, with regard to the right of Muslims — via the Wakf or other groups — to have input on this, is supposed to be heard in the High Court in December.  Nasser’s stated approach is that the bridge has worked fine until now, so he doesn’t see why there’s a problem waiting until December.

That, however, is not how Municipal Engineer Shlomo Eshkol sees the matter.  He says the bridge is dangerous — a catastrophe waiting to happen — and must come down.  In the name of the municipality, he has sent a letter to the Western Wall Heritage Fund saying that the city will destroy the bridge if the Fund fails to act within 30 days. The Fund, which is “studying the situation,” has made no comment as yet.

One matter is certain: The issue is not one of genuine concern on the part
of Muslim groups that we’re doing something wrong.  The issue is one of control, of their uncontested right to have a say.

For that very reason — even beyond the real and serious issue of the potential for the bridge to collapse when people are on it — Israel must proceed.  But of course, Israel wouldn’t be maintaining a bridge that is in danger of collapsing if it were not for fear of political repercussions.  How ludicrous it all is.

The excellent, detailed study of the situation by Nadav Shragai, done for the Jerusalem Center for Public Affairs, can be found here:

And the most recent JPost article on the situation, here: