Today I begin with a marvelous Dry Bones cartoon by Ya’akov Kirschen.  It is not “ha ha” funny, but evokes a laugh in the way that something that rings very true can do.

So, we cope with our adversities, which seem never-ending, and yet we hold our heads high, knowing who we are, and that we will prevail.

But oh those adversities.  The terrorism, while perhaps occurring at a somewhat slower pace, has not stopped.

Some attacks are averted in time because of alert passers-by or security.  There was, for example, the warning received by police in Tiveria, about a suspicious looking man who boarded a bus, saying he wanted to be a “shahid” – a martyr.  They picked him up, and found a knife on him, and – it should be noted – a kippah.  It is not uncommon for terrorists to attempt to disguise themselves as Jews before attacking (see following).  And yesterday, at Tapuach Junction in the Shomron (Samaria), a Palestinian Arab was caught with a knife.

In a different incident this morning, which was not adverted, an Israeli driver had his car pelted with stones, one of which hit him on the head; when pulled over and exited the car, he was stabbed.  Please see what the knife looked like: this was not a paring knife for peeling an apple: 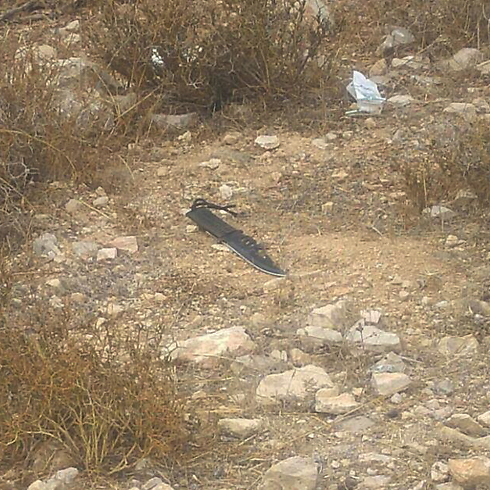 The terrorist, who some reports said was dressed as an ultra-Orthodox Jew, fled to the nearby Arab village of Si’ir; I am confident he will be caught.

While this afternoon, an Arab woman attempted to stab a soldier at a checkpoint but was shot before she succeed.

The big news today has been the announcement that in his meeting with Kerry, Netanyahu agreed to surveillance cameras on the Temple Mount.  This was a proposal of the Jordanians, whose Wakf – the Islamic trust – administers the Muslim holy sites on the Mount.

Netanyahu, at this morning’s Cabinet meeting, said that the Temple Mount would continue to be administered as it has been (rather than reverting to full Jordan control of the Mount, as has been demanded). “The visiting arrangements for Jews on the Temple Mount are preserved, and there will be no change.”

This was good, in so far as he had not caved to those demands for Jordanian control: Jews and other non-Muslims would continue to be able to go up to the Mount, albeit for limited hours.  And Israel would still have security control regarding which Muslims entered.

But then Netanyahu said that the video cameras would serve Israel’s interests, and of this I was entirely dubious – even as he explained that it would “debunk the claim” that Israel was changing the status quo.

It felt demeaning to me because it was one-sided: Muslims watching us.  Actually made me slightly nauseous.

But does anyone in Israel seriously believe that if the Jordanian Wakf were monitoring the cameras they would be forthcoming about Muslim harassment of Jews?  Hardly likely: I’ve no evidence that the Jordanian Wakf is remotely evenhanded.

At the same time, it struck me as exceedingly likely that if one single Jew whispered to himself up there, there would be an announcement about how Jews were praying when they are “not supposed to.” 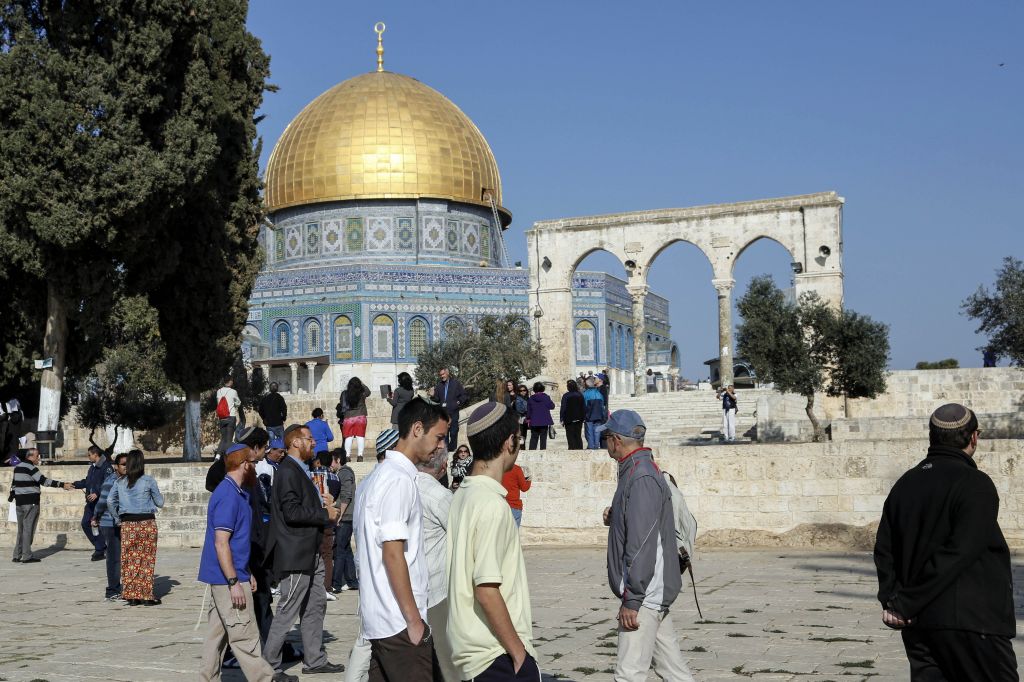 Of course, I was not the only one with serious reservations about this plan.  Knesset Speaker Yuli Edelstein wanted to know exactly who would control the cameras.  He even envisioned the possibility of forged footage put out to damage Israel. 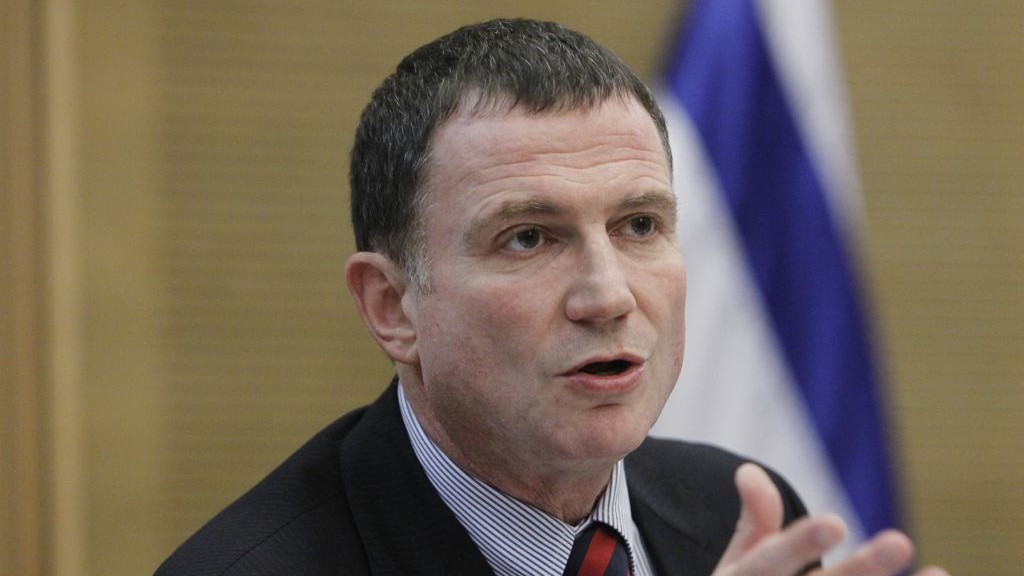 But here’s the finale to this issue, the “kick in the head,” as it were.

“’This is a new trap,’ Foreign Minister Riyad al-Maliki said on Voice of Palestine radio, accusing Israel of planning to use such footage to arrest Muslim worshippers it believes are ‘inciting’ against it.”

Read: They might catch us at something, can’t chance it.

Naturally, Hamas was vehemently opposed as well, as an Hamas spokesman explained in an over-the-top statement:  This proposal was just a “pathetic” attempt to “beautify the Zionist Judaizing project.”  Who writes their public announcements?

We have here a “wait and see” situation, in terms of how this will resolve itself, but I suspect that nothing is going to happen.  But is Kerry going to say that Israel cooperated and the PA did not?  Nahh…

What I want to do here is raise exceedingly important over-arching issues with regard to Israel and the Temple Mount. These are not issues that can be resolved today, but we should remain mindful of them, act on them as appropriate and in accordance with promotion of Israeli rights.

There is no question about the fact that Israel accorded Jordan “special status” with regard to the Mount as part of the Israeli-Jordanian peace treaty of 1994.  But we need to examine the words of the treaty itself (with my underlining for emphasis added) to determine what has been accorded to Jordan and what obligations adhere:

Please note that Jordan has been accorded a special role with regard to Muslim holy shrines only.  On the Mount, this means most significantly the Al Aksa Mosque

and the Dome of the Rock

Although there are other mosques on the Mount, of lesser significance, the special role – as defined in the treaty – does NOT adhere to the entire Mount. Israel has not relinquished sovereignty or right of control over the entire Mount – which comprises some 20 football fields in size – to Jordan.

And yet, there is a sort of extreme deference that is accorded to Jordan on this issue by the Israeli government that is sometimes maddening.  I know…I know…these are sensitive times, and the king sits uneasily on his throne and we do not want jihadists to take over in Jordan. And yet, time and again we seem to go above board.

Most important of all is the question of how it has come to pass that the Muslim Wakf controlled by Jordan has the jurisdiction to forbid Jewish prayer on the Temple Mount – Har Habayit, the most sacred of all Jewish sites. This is an outrage of considerable dimensions.  And doubly so because Jordan is party to a treaty that requires it to work towards freedom of religious worship.

In point of fact, the Israeli High Court has ruled that Jews have a right to pray on the Mount, but that the police have the right to restrict it for security reasons.  And that is what has happened: the right is restricted because of Muslim threats of unrest and violence.

The issue of the right of Jews to pray on the Mount will be pursued until justice is finally done.

“Prayer is a(n) internal, spiritual act that no military or police can prevent.  (Emphasis added)

“The reality on the Temple Mount will not be determined by speeches, and not even by international pledges to cameras, but rather by facts on the ground…We must condition the world to accept the presence of Jews as part of the natural landscape of the Mount.”

Mahmoud Abbas, after meeting with John Kerry and King Abdullah in Amman yesterday, is reportedly demanding “incentives” to stop the violence.  He wants prisoners released and a return to the peace table on his terms.

He has less than no chance of securing the release of terrorists from Israeli prisons now.  I can speak with near certainty when I say that the Israeli public absolutely would not tolerate this in the current climate of terrorism, and that were Netanyahu to attempt to honor this demand, he would lose his government – which means he won’t do it.

What concerns me is that Abbas may have made this demand as an “opening bid,” so to speak, and is looking for other concessions from Israel.

The notion of offering concessions of any sort to get an arch terrorist to stop inciting his people to kill us is an obscenity.  He should stop because we have made it clear that things will go badly for him and his people if he does not. Period.

And yet, I worry that Netanyahu – who a while back declared there would be no concessions – will, when pressured, cave in small ways. But even these small ways constitute a reward for terrorism that should not be entertained.

Arutz Sheva speaks about the possibility of increasing the number of work permits for Palestinian Arabs. But can that be, either, under current circumstances?  How daft do we continue to be???

Another situation to be tracked carefully.

Echoes of an horrendous time come back to haunt us:  Rabbi Haim Yehiel Rotman was praying at the Kehilat Bnei Torah synagogue in the Har Nof neighborhood of Jerusalem last November when terrorists launched an incredibly vicious attack on worshippers.  Rabbi Rotman suffered ax blows to his head and fell into a vegetative coma.  Survived by his wife and 10 children, he passed away yesterday and was buried last night with many hundreds in attendance.

And now a beautiful closing video.  There is something called the “Shabbat Project” that works to get a maximum number of Jews around the world to observe a single Shabbat all at the same time.  It is an annual effort, and the Shabbat for 2015 was this past Shabbat, just over.

The Shabbat observed in 2014 was October 24 and 25th. This video comes from that observance.  At the end of Shabbat there is a Havdalah ceremony, with prayers over wine, spices and candles, to mark the difference between Shabbat and the mundane days of the week.

Here we have the Maccabeats and Cantor Netanel Hershtik singing Havdalah, using two different tunes.  You see people from around the world who have participated in keeping Shabbat.

This, my friends, is who we are at our best, and why we can proceed with heads held high.  Enjoy!