Who doesn’t remember the horrendous, the breathtakingly obscene lynching in Ramallah in 2000 of two IDF soldiers who had lost their way?  The picture of one of the lynchers, showing his bloodied hands, was seared in the consciousness of all of us: 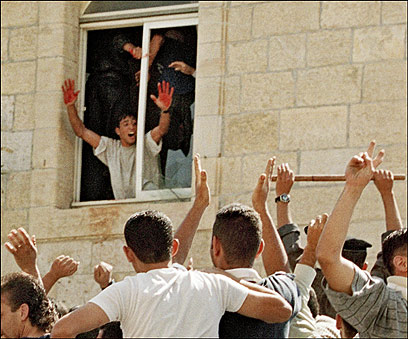 The Palestinian Arab in that picture was Abed al-Aziz Salaha.  I neglected to mention yesterday that he is one of the terrorists who is now scheduled to be released.

Plain and simple: It shouldn’t be.

One of those murdered that day was Nordim Norzich.  Now his brother says:

“The government lied to all the bereaved families. They promised the bereaved parents that the terrorists would never get out. Ehud Barak [then prime minister] made a personal promise to me that this terrorist would never see the light of day.”

For the complete list of those to be released:

Spurred by what is happening, Transportation Minister Yisrael Katz (Likud) has asked Prime Minister Netanyahu to order the death penalty for Ajmad Awad and Hakim Awad, convicted of the heinous murders of five members of the Fogel family — including a three-month old baby — in Itamar in March of this year.  The cousins — who mutilated the bodies of at least some of their victims — have been convicted and are serving multiple life sentences.  It was Hakim who spoke about how proud he was of what he had done.  Done “for Palestine.”

The idea, here, of course, is to guarantee via capital punishment that they can never get “traded” into freedom.

I don’t know that the prime minister can “order” death for those already sentenced by a court.  Nor — as much as I happen to believe they deserve it — do I think it even remotely a possibility that they would be given the death penalty, because they are young.  As they are not yet out of their teens, it would be a very difficult sell.  When they were first arrested, the mayor of their village declared, “What?  They’re only children.”  Yea, sure.

But beyond this particular case there is a principle that it is time to consider.  Judaism is not absolutely opposed to the death penalty, but is not predisposed to its frequent use, to say the least.  Israel has only executed one person in 63 years: Adolph Eichmann.  Maybe it’s time for this to change.

See the commentary of Aaron Lerner on a related issue:  “Blood and revenge.”

Not capital punishment, but actively taking out Hamas leaders instead of shooting at empty buildings.

Yet another issue to be dealt with:  Among those being released at Hamas’s demand are six Arabs who are Israeli citizens and who will be allowed to return to their homes.  This is a bad move.

Yarom London looks at the several reasons why. (He refers to Israel’s Arab citizens as “Palestinian Israelis,” which I find unsettling even though I know that in recent years this is how they refer to themselves. But his analysis is good.)

As Israel seeks to make its Arab citizens feel truly Israeli — to identify as Israeli, he says, the key is equality of Arabs and Jews under Israeli law.

“The equality of the law in respect to the breaching of national security directly pertains to the shaping of our Palestinian citizens’ Israeli identity…An Israeli criminal who committed a crime in Israel should serve his sentence in an Israeli prison. Equality under the law also includes the deprivation of freedom under equal terms.

“[But] when the State included Israeli prisoners in the list of detainees to be released, it told Palestinian Israelis that they are not like other Israelis. They are subjected to different kind of laws and are removed from the general public; they are a ‘special case.’

“There is no telling how this declaration will be affecting a few or many Palestinian Israelis, yet I assume that it will be entrenched in their consciousness, pushing them further away from us and vice versa.
“The festive celebrations being prepared in the communities of Arab Israelis to be freed in the Shalit swap and the words uttered on the issue by Islamic Movement spokesmen reinforce my estimate. They are saying almost explicitly: Your victory is also our victory in the struggle against the State of Israel, where we constitute one-fifth of the population.”

How awful this is.  Pain multiplied upon pain.

Families of those murdered by terrorists implored the High Court today to stop the madness of releasing the terrorists. Bad enough, they say, that they have lost family members.  Now those still living will be in greater danger.

The Shalit attorney Gilad Sher observed that, “This is a sensitive, fragile, volatile deal. Any change in it, any court-ordered delay may be catastrophic.

“[The Shalits] are anxious. They fear the unknown ramifications of any delay or change and they plead the court not to grant any petition whose consequences cannot be predicted. “

Noam Shalit responded more directly, that “Unfortunately, suspending the deal won’t bring the victims of terror back [to life], but it could condemn Gilad to death.”

What else would we expect him to say as the life of his son hangs by a judicial thread?  And yet, suspending the deal could save many other lives.

The court ruling is supposed to come tonight.  It will not be in favor of the petitioning families.

There is much speculation as to what prompted this deal now.  I’m not prepared to sign on to any of the current theories, for there is simply too much speculation, too much that we don’t know.  There’s one theory that says, because of Abbas’s intransigence, Israel is trying to diminish the PA by strengthening Hamas.  Don’t know about that.  Another attributes what’s been going on to the recent visit here of Defense Secretary Panetta, who’s attempting some international power plays.  Don’t know about this either.

However, mindful of the fact that much more may well be going on than what seems apparent at the surface, I intend to keep my ears and eyes open.