The Mount of Olives. At the eastern edge of Jerusalem, there is a line of three hills, demarking the edge of green Jerusalem and the beginning of the desert to the east beyond.  The center peak, known as the Mount of Olives, has been a Jewish national treasure for 3,000 years.  It was here that the new month was announced (the Jewish calendar is lunar), and that holy olive oil — extracted from the olive trees on the site — was prepared for the Temple and for anointing.

It is said, as well, that this place was the last from which the Shekhina (the presence of G-d on this earth) departed Jerusalem after the destruction of the Temple, and that it will be the first to which it will come at the time of the Moshiach.

Rising 150 meters above Har Habayit (The Temple Mount), this series of peaks serves as a natural block to invasion of  Jerusalem from the east. From the Old City of Jerusalem, there is a magnificent view of Har HaZeitim.

For the past 2,500 years, Har HaZeitim has been a burial place for the Jewish people — special precisely because of its connection to the Shekhina.

There are 150,000 Jewish graves on Har HaZeitim. Those who are buried there comprise a “who’s who” of our heritage and our modern history: the prophetess Hulda; the prophet Malalchi; Rabbi Avraham Isaac Kook, chief rabbi of pre-state Israel and founder of the renowned Yeshiva bearing his name; the great Hebrew writer and Nobel Prize laureate Shai Agnon; Eliezer Ben Yehuda, father of Hebrew as a modern language; passionate Zionist, Irgun leader and prime minister Menachem Begin; Yitzhak and Talia Imes, parents of six and victims of a terror attack near Hevron this September.  And on, and on, and on. 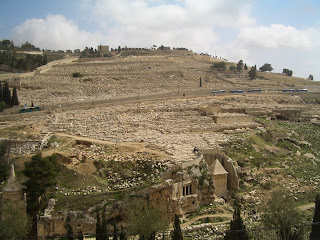 From 1948, when eastern Jerusalem was captured by Jordan, until its liberation by Israel in 1967, no Jews were allowed at the site.  Horrendous damage was done to the cemetery during the course of those 19 years: some 40,000 graves were destroyed to make way for a road at the top of the Mount and for the Intercontinental Hotel.  The Jordanians used Jewish tombstones for latrines.

Since 1967, restoration has taken place.  But it has been insufficient.  And the unacceptable fact is that even though Israel has sovereignty over the area, vandalism still occurs on a regular basis.

Arabs use the cemetery as a short-cut to their villages, stepping on headstones as they walk. Arab youngsters play soccer in the area, using gravestones as goal posts.  And, worst, Arab boys — teenagers and even pre-teens — have developed a practice of throwing stones at mourners at the cemetery.

Last night I attended a program promoted by the International Committee for the Preservation of Har HaZeitim, which is calling for a series of actions to rectify the situation, including:

[] Repair of all desecrated and damaged graves.
[] General clean-up of the entire cemetery.
[] Installation of fences.
[] Installation of security cameras monitored by the police, stationing of police officers onsite to patrol, with arrests made for vandalism and desecration.
[] As necessary, the passing of new laws against desecration of graves. (There are problems in dealing with minors under 16, and new approaches — perhaps involving holding the parents responsible for their children’s rock-throwing — must be considered.)
[] Making Har Hazeitim visitor-friendly, with a visitor center, parking, lighting, and explanations of major sites, including the graves of well-known figures.

At the program, a panel of three speakers addressed pertinent issues with regard to this site: MK Danny Danon (Likud), who provided a legal overview; attorney and rabbi David Martin, who offered the religious dimension (which I’ve included above); and commentator Caroline Glick, who addressed the symbolic and historical meaning of the site and the significance of our sovereignty there.

MK Danon says that the current situation represents an attempt by the Palestinian Arabs to subvert our connection to the land.  If we want Jerusalem to truly be united, we must take action.  He believes there is a majority in the Knesset and the government to act on this today.

Caroline Glick, saying that this affects both our past and our future, addressed the issue of Israeli sovereignty. The law must be enforced without prejudice in all parts of Israel, even in areas that are Arab. Unfortunately, our political elites do not recognize what Jewish sovereignty means. Too often they offer lip service to the idea of Jewish sovereignty but turn away from actually enforcing the law in Arab areas.  But Jewish sovereignty means being sovereign over minorities in the land of Israel.  This must be accepted.  It’s not about dividing the city into Jewish and Arab neighborhoods under different sovereignties.

No one said this last night, but I will say it: If the law is enforced and the police get tough with rock throwers and grave desecrators, we will hear about it. (Don’t we always?)  “Human rights” activists will charge us with prejudicial actions against Arab youth. Left wing news media will interview Arab parents “upset” with what’s going on. So often it has been easier to not arouse this hostility towards us, this negative PR.  But it’s past time for us to hold up our heads and have the integrity to protect our rights and our heritage.  What’s going on at Har HaZeitim is an outrage that cannot be permitted to continue.

For a video on this issue, see http://har hazeisim.org/video  (Note: zeisim is simply the Ashkenazi Hebrew pronunciation for zeitim, the Sephardi, Israeli normative, pronunciation.)

Prime Minister Binyamin Netanyahu arrived in the US today for a five-day visit.  Tomorrow he will be addressing the  General Assembly of the Jewish Federations of North America — the largest annual gathering of Jewish American leadership — in New Orleans, and will today be meeting with VP Joe Biden and Secretary of State Hillary Clinton.

Netanyahu is making all sorts of noises about hoping the “impasse” on negotiations can be overcome.  What that actually means is not clear.

Luckily, he will not be facing down President Barack Obama.

I note as an aside:  The president, in his role as royalty, is currently in Mumbai, India, at a cost of over $200 million/day for US taxpayers because of the size of the entourage (is it 3,000 people???) he has brought along and the accommodations (including the entire Taj Mahal hotel) they are being provided with.

(And how furious are Americans about this?)

Caroline Glick has produced several excellent Latma satirical videos.  But this new one, positively chilling, beats them all, in my opinion.  “Shir HaHalom,” or Song to a Dream, is sung to the tune of “Shir Hashalom,” Song to Peace, which is what PM Yitzhak Rabin sang at a rally right before he was assassinated.

“As happens every year, the Left marked the day by talking about Rabin’s wonderful legacy of peace and how if he had been alive there would be peace today.

“Everyone forgets to mention that when he was killed Rabin was reconsidering the entire Oslo process due to the massive increase in terror that Israel suffered after bringing the PLO to the outskirts of Jerusalem.

“Every year we remember Rabin, and every year the Left conveniently forgets the real toll of the peace process – more than 1,500 Israelis murdered by Palestinian terrorists who use the Left’s obsession with peace as a means of continuing their war of annihilation against us.

“This week Latma, the Hebrew-language satirical website I edit decided that the time has come to give voice to the victims. And so we present to you “Song to a Dream” by the Victims of Peace Band.

“May their memory be a blessing and may G-d avenge their blood.”

You might also enjoy the very on-the-mark Latma on “UNESCO Makes a Mosque.”

A clarification regarding a statement from my posting on the US elections, in which I referred to Congressman Eric Cantor, who is now slated to be House Republican Whip.  He is slated to be Majority Whip in the House. He already served as Minority Whip.  (Thanks, Jeff D.)