A major piece I have written on the situation in Gaza and the role of Islamic Jihad has just gone up on Front Page Magazine.  Please see it, as it provides background and analysis of a very complex situation:

A mini flotilla is sailing in the Mediterranean, headed towards Gaza as I write. This venture consists of two yachts — one under the Irish flag and one Canadian.  In all there are 27 passengers aboard, from  Canada, the United States, Australia, the Palestinian Authority, and Ireland, plus one Israeli Arab; the organizers appear to be Irish. 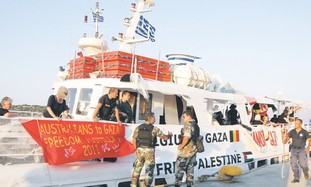 This flotilla left from a port in Turkey; Israel was pleased that Turkey — apparently heeding Israeli and US warnings — did send out warships to accompany it, as had been threatened.  The Turkish government has also been at pains to let it be known that there are no Turkish passengers involved

The US has warned American citizens not to cooperate, as they would be liable under the law.

Israel has made it clear that the yachts will not be permitted to breach the blockade on Gaza. More an annoyance, I think, than a crisis, but yet a signal that these guys don’t give up.

The yachts are carrying medical equipment, which Israel has offered to off-load and deliver to Gaza.