Binyamin Netanyahu deserves credit for having sounded the alarm at an early date on the dangers of Iran, and sounding it often since. This is not political opportunism for him. It’s real, and it’s a pity that he hasn’t been heeded more seriously.  The situation, which has been permitted to deteriorate so dangerously, is just one mark of how obtuse and down right stupid world “leaders” are — how narrow in their scope and how self-absorbed.

Very soon a major report will be released by the IAEA on Iran’s nuclear development, which is expected to be damning in a way that no previous report has been.  The window of opportunity for stopping Iran is closing. This is both because of the rate of nuclear development, and with regard to Iran moves to place everything far underground.

And so now the media is focused on this issue, and in recent days the question being asked is this: Has Prime Minister Netanyahu, in consultation with his military advisors, decided that Israel should attack Iran imminently?

In the last several days, there has been a spate of media reports about this.

Last week Yediot Ahronot and then Haaretz ran stories regarding claims that the prime minister and the defense minister were trying to convince the cabinet to approve an attack.

Two days ago, Moshe Ya’alon, Minister of Strategic Affairs and former IDF Chief of Staff came out with a statement on Army Radio in which he declared that Israel cannot depend on outside help in dealing with Iran:  “We must aspire to a situation in which the righteous work will be done by others, but act as if, ‘if not me, who?'”

Ya’alon is no light-weight in these matters and runs a ministry for which I have the greatest respect.  What was he saying?

At the same time, the JPost ran an analytic article, “What may be involved in an Israeli strike on Iran.”  May be.  This, of course, is not authoritative, in spite of the picture of jets refueling in air credited to the IDF: 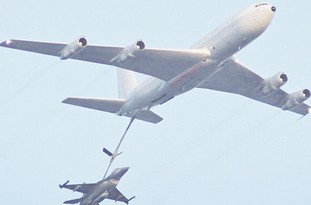 This piece indicated that Israel is capable of pulling off a hit.  I, with my own limited information, have understood this for some time. The hit would not destroy Iran’s nuclear development program, but rather set it back some years.  But here we had some startlingly specific information, regarding drones, paths that planes might take, that capability to refuel in the air, use of bunker busters, the need to first neutralize Iran’s defense capabilities, and more.

What to make of this?

Foreign Minister Avigdor Lieberman said yesterday that while media reports had “no relation to the truth” with 99% of them false, they had caused “tremendous damage.”

Minister Benny Begin declared with anger that,  “There has never been a breakdown of responsibility and a campaign of recklessness like there is today.”

Yesterday, Israel tested a missile.  News reports had it that it was “probably” a long range Jericho missile capable of carrying a nuclear warhead and reaching Iran.  All a defense official said at the time was that a “rocket propulsion system” had undergone a test that had been scheduled a long time ago.

“This is an impressive technological achievement and an important step in Israel’s rocket and space progress.  The successful experiment proves again that the engineers, technicians and staff of the Israeli defense industries are of the highest level.”

Today a senior IDF officer insisted that there was no connection between the test of the missile and media speculation regarding an attack on Iran.  And, indeed, just because a system may be capable of being utilized for an attack does not mean the attack is being planned.  In all events, it’s good to know that this missile with its alleged capacity exists, and good, as well, that Iran knows it exists.

One theory making the rounds is that individuals here opposed to an attack on Iran by Israel are deliberately leaking information to interfere with the possibility of carrying it out — because too much is known and the surprise element has been eliminated.  Could be.  Except for statements by Ya’alon and Lieberman (which I’ll come back to in a minute).

There is yet another possibility — one that has occurred to me and to others: These leaks, this spate of publicity, may be in part geared to spurring the international community to act so that Israel does not.

Remember that Ya’alon said that, “We must aspire to a situation in which the righteous work will be done by others…”

And there we may have it: What is supposed to be sought next by the international community, after the release of the IAEA  report, are stringent sanctions against the Iranian Central Bank and the Iranian oil import and export industry, with an eye to strangling Iran’s capability to function and bringing down the regime.

Now, for the very first time, there is a real possibility of putting into place sanctions tough enough to make a difference. This is because the anticipated severity of the IAEA report has brought on board not only the Europeans, but the previously uncooperative (obstructionist) Russia and China.

Then this would not be the best time for Israel to act militarily. For if Iran can be stopped without such action, so much the better.  But this does not necessarily mean that Israel will never act.  A military operation remains on the table.

My best guess, then, would be that Israel is sending a message to the world: Time is short.  We’re watching closely.  And if it comes to it that you have failed to act, or have unsuccessfully exercised all of your options short of a military operation, and the window of opportunity is almost closed, then it will be time for us to act.  And, rest assured, we have trained and prepared and have our plan in place, and are equipped to do so when necessary.

And if that time does come, I am confident that it will not be announced by the JPost and Haaretz and all the rest.

The Guardian in Britain yesterday ran a story indicating that the British military was gearing up to lend assistance to the US in an attack on Iran. Allegedly, specific preparations to that end were being made in Britain, because Obama was fed up and had decided he was ready to act.  This report, too, was full of details, such as planned use by the US of British warships for launching some missile attacks.

Well… I’ve learned never to say never. But, with the possibility of new sanctions to be put in place — actively promoted by the US, and in light of Obama’s very distinct preference for “engagement,” it is difficult for me to believe that right now he is seriously entertaining thoughts of an attack.  This would be his very last resort option, if an option at all.

To be hoped for, quite candidly, is that if military action is finally unavoidable, that the US would undertake it.  US capabilities and logistical advantages make it better equipped to carry out such an attack on a large scale.

You might want to see a YNet opinion piece on this subject:

With the maneuvering of Egypt, a “cease fire” of sorts (a temporary period of calm?) has been established in Gaza, but Islamic Jihad is saying they don’t expect it to last.  They are being supported by Iran, they boast, and they have 8,000 “operatives” ready to go to war.

Israel has now frozen its $2 million in annual dues to UNESCO, following its acceptance of “Palestine” as a member.

And — guess what? — PA Foreign Minister Riyad al-Malki has announced that the PA would not be seeking admission into any other UN agencies now after all.  This was after UN Secretary-General said this move was “not beneficial for Palestine and not beneficial for anybody.” That is because “millions and millions” of people could be affected if funds are cut to multiple agencies.

Horray!  It’s raining here in Jerusalem. A steady downpour, not a shower. The first of the season and a real blessing.  Yesterday a silver lining, and today the clouds open up. 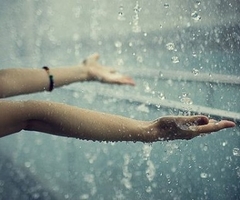